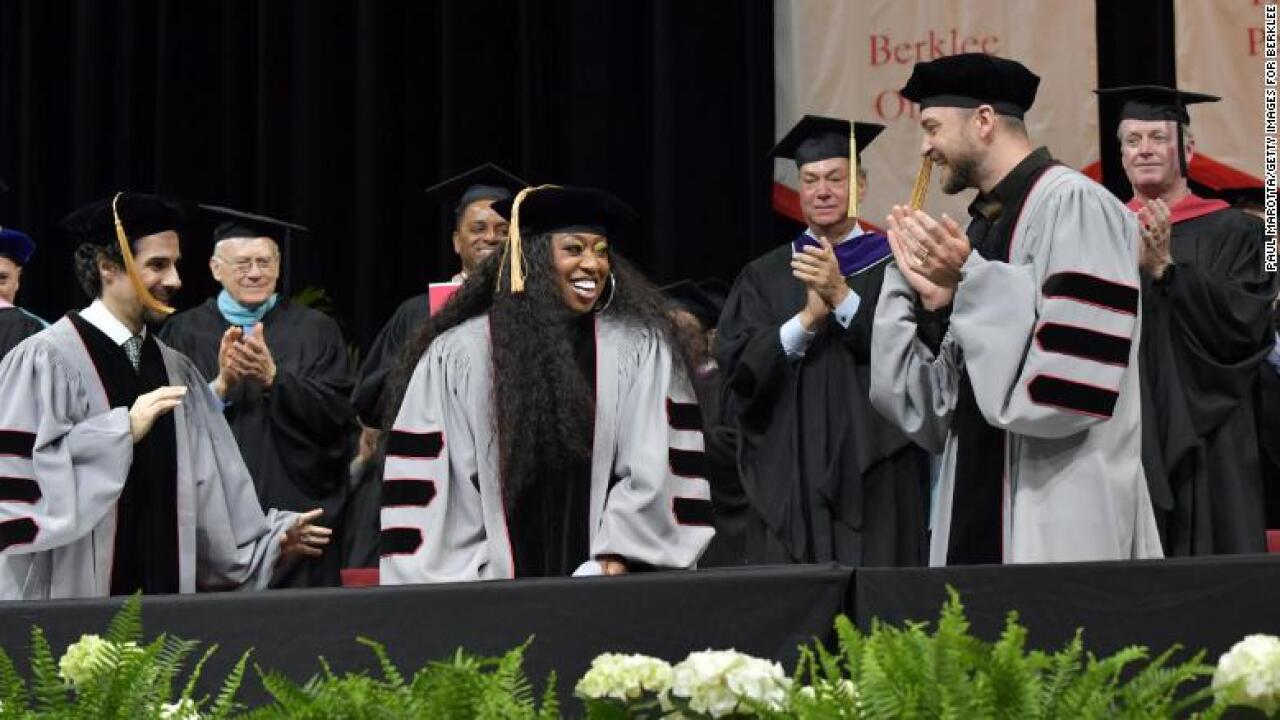 Agganis Arena at Boston University on May 11, 2019 in Boston, Massachusetts.

Fresh-faced college seniors aren’t the only ones being honored this graduation season.

Agganis Arena at Boston University on May 11, 2019 in Boston, Massachusetts.

Anyone tuned in to the world of elite music schools knows this is a big deal.

“This year’s honorary doctorate recipients are being recognized for their achievements and influences in music, and for their enduring global impact,” the school said in a statement in March.

The three musicians certainly have the accomplishments to back up the honor.

VIRGINIA BEACH, VIRGINIA – APRIL 27: Missy Elliott performs onstage at SOMETHING IN THE WATER – Day 2 on April 27, 2019 in Virginia Beach City. (Photo by Craig Barritt/Getty Images for Something in the Water)

Missy, a Portsmouth, Virginia native, is nothing less than a hip-hop icon, and she has five Grammy awards to prove it. The solo rapper, singer, songwriter and producer has been making waves for three decades.

In 2015, she performed to the largest audience in Super Bowl history, with her classic songs “Get Ur Freak On,” “Work It” and “Lose Control.” Days after the performance, both “Get Ur Freak On” and “Work It” became top 40 hits almost 15 years after they had first blown up the music charts.

After receiving her honorary degree, Missy Elliott was not shy with her joy. She posted a video of herself on Twitter dancing and pointing to her diploma.

CREATE YOUR OWN LANE!!!!!!!!!!!!!!! Sincerely Dr. MISSY ELLIOTT🙌🏾🙌🏾👩🏾‍🎓 @BerkleeCollege Thank you for this Honorary Doctorate Degree I am SO HUMBLED🤗 pic.twitter.com/JipNdcrRYb

“CREATE YOUR OWN LANE!!!!!!!!!!!!!!! Sincerely Dr. MISSY ELLIOTT,” she wrote, before adding “Thank you for this Honorary Doctorate Degree I am SO HUMBLED.”

In just a few weeks, Missy Elliott will receive another huge honor: She’ll become the first female rapper to be inducted into the Songwriters Hall of Fame.

Alex Lacamoire also received an honorary doctorate on Saturday. The talented composer, orchestrator and musical director was a major force behind hit Broadway musicals “Hamilton,” “Dear Evan Hansen” and “In the Heights.” Lacamoire has four Grammys and three Tony Awards to his name. He also graduated from Berklee College of Music in 1995.

After the initial announcement that he would receive an honorary doctorate from Berklee, Lacamoire relayed his thanks on Twitter.

“Being honored in this way by my alma mater means the world to me, you guys. I’m over the moon with joy and I’m psyched to be grouped with these legends! See y’all in May,” he wrote in March.

Dearest Berklee Crew: thank you for that fantastic concert, for all your love, for continuing to make me a proud alum, and for welcoming me back for a couple unforgettable days.

Justin Timberlake’s work as an actor, author and 10-time Grammy Award-winning musician has made him a household name.

With hits like “SexyBack” and “Can’t Stop the Feeling!”– along with appearances in “The Social Network” and “Shrek the Third” — he has fans across generations. Timberlake was recognized by TIME as “one of the 100 most influential people in the world” in both 2007 and 2013.

His appearances on “Saturday Night Live” also show he’s really funny, which is clear in the video he posted to Twitter after receiving his degree.

They’re part of an exclusive group of music legends

Berklee students put on a private show for the three superstars the night before commencement.

“What a night. Thank you, @MissyElliott, @jtimberlake, and @LacketyLac! #BerkleeGrad2019,” Berklee College of Music posted on Twitter after the show. Photos show students performing for the trio. They also picture two of the honorees beaming on stage with the performers.

Berklee College of Music has awarded honorary doctorates since 1971.