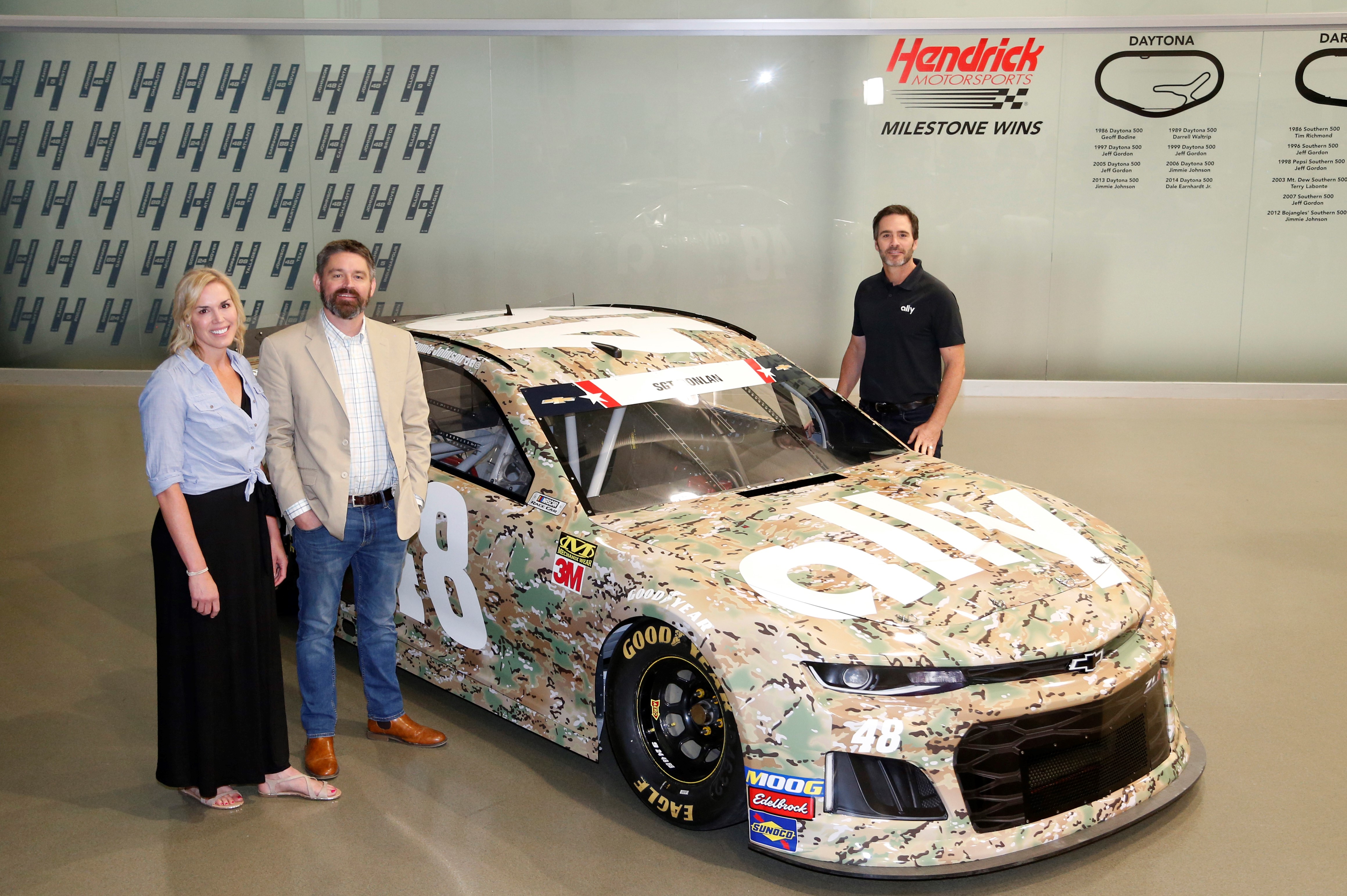 Johnson revealed the car during a military gratitude event at the Hendrick Motorsports headquarters as 50 volunteers from Ally, the USO and the No. 48 Ally Racing team made approximately 1,000 care packages for active service members. Sgt. Donlan’s nephew, Laine Donlan, who is an Ally employee and member of Ally’s veteran employee resource group, assisted Johnson in revealing the car and honoring his uncle.

“The NASCAR Salutes program is something I’ve been fortunate to have been a part of many times in my career,” Johnson said. “In Ally, I’m very proud to have a sponsor that’s supporting one of their own, and it’s an honor to have Sgt. Richard Donlan’s name on our car. It means so much to the families involved, and it’s very cool to make a personal connection with them. Having grandparents who served, I have so much respect and am thankful for our military, both past and present, and for those who have made the ultimate sacrifice for our country. It’s a very special weekend all around.”

Donlan was entering his senior year at the University of Virginia when he felt the call to serve and voluntarily enlisted during the fall of 1967. Rick was 23 at the time of his death, several years older than most of the men he served alongside.

The Veteran Allys group, with more 400 members nationwide, was instrumental in identifying a fallen soldier to be honored on Johnson’s #48 Ally Chevrolet as part of the “600 Miles of Remembrance” program during the May 26 NASCAR Cup Series race. Donlan’s name will grace the windshield of the race car that features a military-themed camouflage paint scheme in lieu of the Ally plum and grapefruit brand colors.

“This tribute is an incredible honor for our family, particularly for my dad, who lost his younger brother at such a young age,” said Laine Donlan, senior director in IT for Ally. “When I submitted his name to be mentioned alongside other fallen soldiers, I had no idea Uncle Rick would be memorialized on the front of a seven-time NASCAR champion’s car. It’s humbling to know his service and sacrifice will be known by so many.”

Several members of the Donlan family will be honored as special guests during the Memorial Day weekend race, including Rick’s brother Jay, a Navy veteran; Jay’s wife Mary, who served in Vietnam as an Army nurse; and Jay’s son Laine, who nominated his uncle for the NASCAR Salutes tribute, and his family.

As part of the Memorial Day weekend activities, Ally also is sponsoring a free concert May 23 headlined by country music singer-songwriter Corey Smith at the three-day Speed Street Festival in uptown Charlotte.

Here is the car @JimmieJohnson will drive during NASCAR's longest race! Jimmie and the Ally 48 team will pay tribute to Army Sgt. Richard Donlan, who died in combat during the Vietnam War. Sgt. Donlan's nephew, Laine, is part of the Veteran Allys employee resource group. pic.twitter.com/XIp2za7l8C

Ally Financial Inc. (NYSE: ALLY) is a leading digital financial-services company with $180.1 billion in assets as of March 31, 2019. As a customer-centric company with passionate customer service and innovative financial solutions, we are relentlessly focused on “Doing it Right” and being a trusted financial-services provider to our consumer, commercial, and corporate customers. We are one of the largest full-service automotive-finance operations in the country and offer a wide range of financial services and insurance products to automotive dealerships and consumers. Our award-winning online bank (Ally Bank, Member FDIC and Equal Housing Lender) offers mortgage-lending services and a variety of deposit and other banking products, including savings, money-market, and checking accounts, certificates of deposit (CDs), and individual retirement accounts (IRAs). We also support the Ally CashBack Credit Card. Additionally, we offer securities-brokerage and investment-advisory services through Ally Invest. Our robust corporate finance business offers capital for equity sponsors and middle-market companies.

For more information and disclosures about Ally, visit https://www.ally.com/#disclosures.