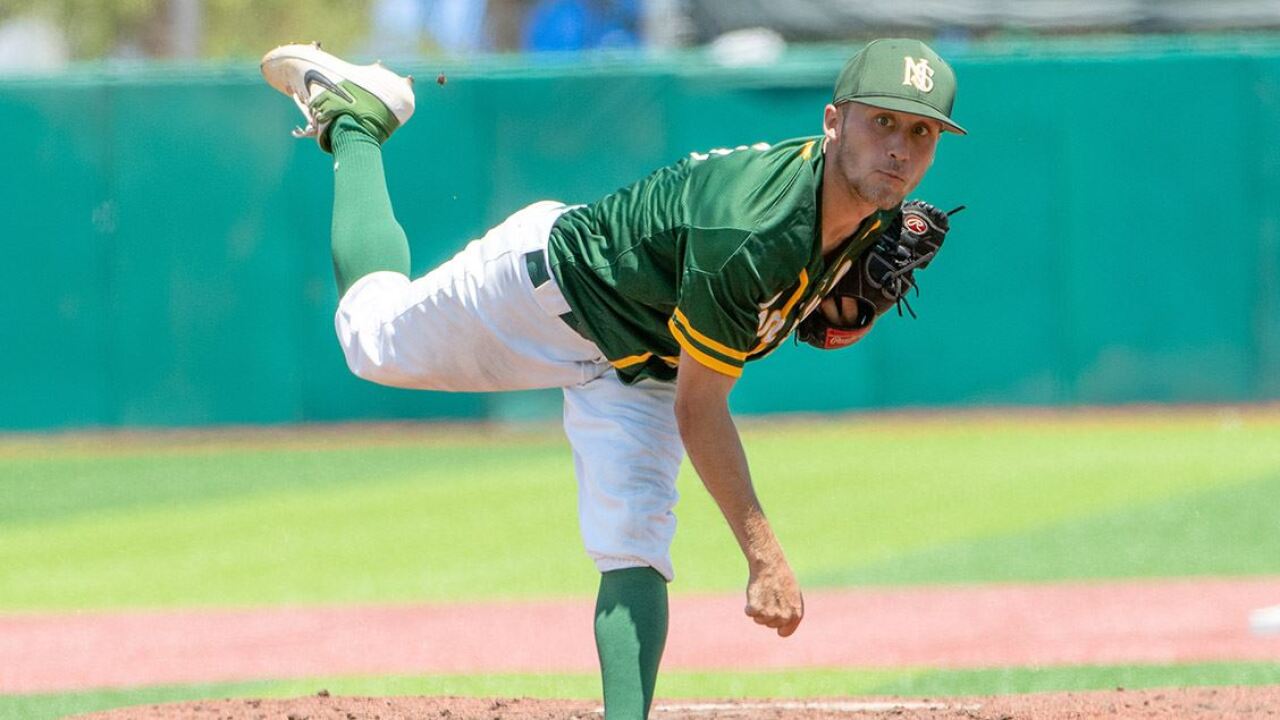 DAYTONA BEACH, Fla. –  Chase Anderson pitched a complete game with eight strikeouts, and Korey Singh crushed a two-run home run in the bottom of the seventh as Norfolk State rallied past North Carolina A&T, 4-2, to reach Saturday’s championship of the MEAC Tournament.

The top-seeded Spartans (24-24) advance to the championship game for the ninth time in program history and the third time in the last four years. NSU has only advanced out of the winner’s bracket twice and had not done so since 2001.

Anderson made personal history on Friday as well, collecting his 24th-career win to join Devin Hemmerich, who played from 2014 until 2017, for the most wins in program history. Additionally, his eight-strikeout performance vaulted the senior from Norfolk into sole possession of second place on the single-season strikeout ledger with 97.

“Anderson was everything you wanted from an ace,” head coach Keith Shumate said. “He was a difference maker.”

Confident two-out hitting from the Aggies (29-23), the Southern Division’s No. 1 seed, put the Spartans in a 2-0 hole by the middle of the second inning. Ryne Stanley got things going with a one-out bunt single down the line at third.

Following a wild pitch and a flyout, Stanley stood on third. Anderson was one strike away from escaping the inning with no damage, but Zach McLean took a 2-2 offering into left field to score Stanley. The inning’s second wild pitch moved McLean to second, where he scored on a two-strike single from Brandon Melendez.

The Spartans halved the deficit in the bottom of the second, and Anderson proceeded to mow through the N.C. A&T lineup.

Stephen Baughan led off the home half of the second by legging out an infield single and advancing to second on an errant throw from the second baseman. After a groundout, Baughan came home to score on Ty Hanchey’s right-field single.

Baughan was a handful for the Aggies all game long, going 3-for-4 from the plate and scoring twice.

Anderson pitched perfect innings in the third and the fourth, but the Spartans could get nothing going against N.C. A&T starter Michael Johnson. A two-out single from Tony Mack in the fifth snapped a string of nine-straight batters retired by Anderson, but Anderson shut the door with a strikeout.

“I had a lot of confidence in my teammates,” Anderson said. “I knew at some point we would get a few runs across, so I had to be competitive.”

After another clean inning from Anderson in the top of the sixth, NSU started the bottom of the frame with promise. With the top-third of the order due to bat, Justin Hayes led off with a single through the hole on the left side of the infield only to be erased when Alsander Womack grounded into a double play. Caleb Ward struck out looking to end the inning, and the Spartans’ frustrations with Johnson continued.

A day removed from scoring four runs in the bottom of the seventh to pull away from Florida A&M, the Spartans struck again in the seventh to take the lead.

Baughan started the rally with a double when the N.C. A&T right fielder lost the ball in the sun. Singh then wasted no time in giving NSU the lead, swinging on the first pitch and driving it high off the scoreboard in left-center for a two-run, go-ahead homer.

The bottom of the Spartans’ order tacked on one more run to complete the seventh-inning rally. Adam Collins singled into left before stealing second. Trent Hanchey then won a foot race with the pitcher for an infield single before Khie Simms grounded out to bring home Collins.

“We believe in each other,” Anderson said. “We never give up.”

Anderson retired nine of the last 10 batters he faced to carry NSU out of the winner’s bracket. He set the Aggies down in order in the eighth before working around a one-out single in the ninth. Anderson struck out Stanley swinging in a seven-pitch at-bat to end the game.

The Spartans await the result of two consolation bracket games to learn who they will face on Saturday.