A lifelong adventurer tries to literally walk on clouds

Saying Kien Lam was born with a travel bug is a major underestimation.

But even though one of his life goals was to literally walk in the sky, Lam is the first one to downplay his travel ambitions.

“I’m not an adrenaline junkie or a thrill seeker,” Lam tells CNN Travel. “It’s more that … it’s there. This experience is out there. I just want to experience everything I can.”

Still, the road from a working-class childhood in California to hanging out on the wing of a plane was not a straightforward one.

On the surface, Lam seemed to be the perfect image of the ideal American immigrant dream.

Born in a Hong Kong refugee center to parents fleeing the war in Vietnam, he grew up the oldest of four kids in the San Gabriel Valley and landed a full scholarship to the Wharton School of Business at the University of Pennsylvania.

After college, he took the expected route and got a finance job. Making a six-figure salary was incredible, but Lam found himself more and more trapped by the boundaries of conventional office life.

He would start adding on extra days to work trips and saving up for a big vacation once a year.

It kept the travel bug at bay, but not forever.

“I wanted to see so many places that a few weeks a year wasn’t enough,” he says. Ultimately, there was only one thing to do — quit, and take a different path. 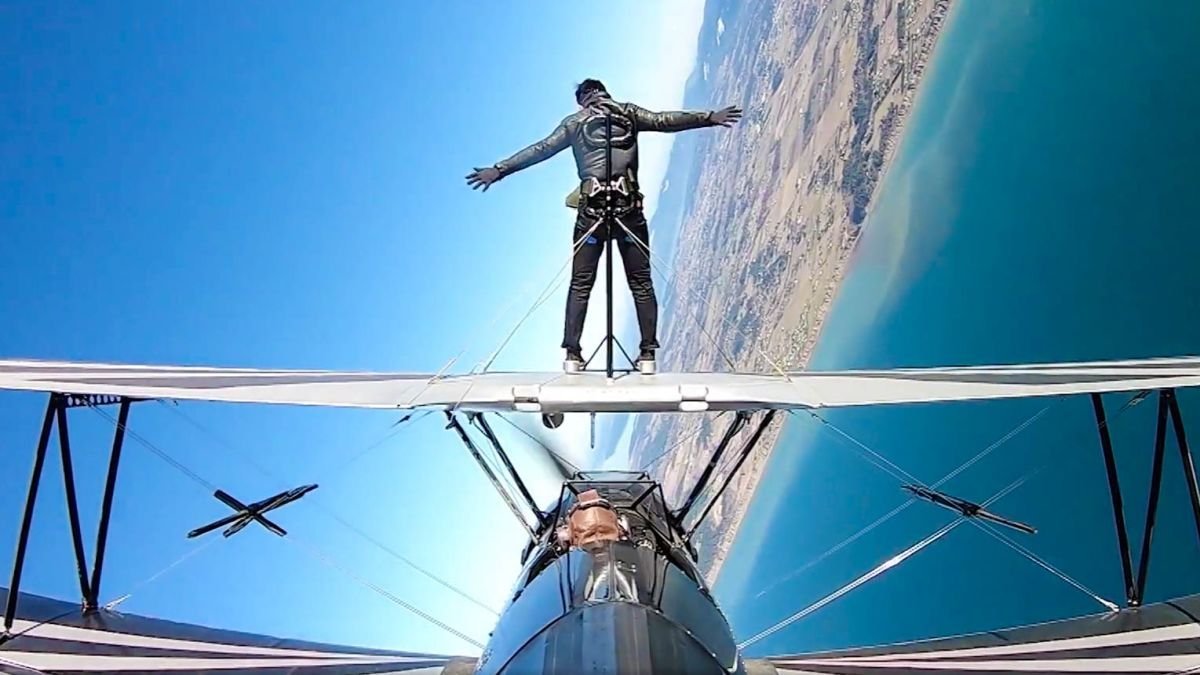 Up in the air

Some of Lam’s travels take him to remote corners of the Earth where few others have gone. But the town of Sequim, Washington, is a relatively minimal 900 miles (1,450 kilometers) from home.

He wasn’t in Sequim to take in the sights, though. He was there to connect with Mike and Marilyn Mason, the husband-and-wife team who own and operate Mason Wing Walking Academy.

Marilyn trains wannabe wing walkers on the exact mechanics of navigating the exterior of a biplane, making sure they know which things not to step on and what they can hold onto.

It’s almost like teaching someone to dance — you rehearse the steps over and over until it feels like second nature. Out there in the clear blue eternity, it’s a sort of ballet pas de deux between plane and walker.

The Masons don’t use in-ear communication devices as some other small-plane pilots do. At 4,000 feet, Mike, who pilots, would “wag” the plane, indicating it was safe to get out. From there, Lam was on his own.

“I had no one talking into my ear, no one telling me what to do, just what we had talked about on the ground,” Lam says.

“At one point, you feel very exposed because there’s nothing to your back anymore, and then you get into this back stance. You lean against it. That’s when you have to let go of wires or cables, and you latch into the seat belt, put your feet into two footholds, and then give [Mike] the thumbs up, and then once you do he starts doing acrobatic moves, like diving down and rolling over, barrel rolls, loops, like what you see at an airshow, except you’re attached to the top of the plane. Your view of the world is just changing constantly.”

Lam says that the wing-walking experience, which costs $1,000 per person minus travel, was worth every cent.

“I was just screaming for joy,” he says. “It was a once-in-a-lifetime experience.”

Initially, Lam’s post-finance job plan was to travel for a year, getting the bug out of his system once and for all.

He began in London, where he visited friends, then continued onward to Paris and to a surfing trip in Portugal. From there, he went to Morocco, Egypt, Turkey, Jordan, Thailand, Indonesia and Japan, and then over to South America to explore Argentina, Uruguay, Chile, Bolivia and Peru.

Once he returned home to the United States, Lam put together a time-lapse video of the experience, which went viral. Suddenly, the year turned into two, then three and then more. Now, he can’t imagine life any other way.

Thanks to his successful video, he has been able to get work as a photographer and videographer, making short films and ads for destinations. The travel has become the job, and vice versa.

But for Lam, travel isn’t just about ticking off boxes of which country you’ve been to and which attractions you’ve seen.

On his blog, Where And Wander, he keeps a constantly updated “bucket list” of experiences, which include getting a private audience with the Dalai Lama (yep, made it happen) and releasing a lantern at the Yi Peng Lantern Festival in Chiang Mai, Thailand (not yet).

Also on the list? Buying his parents a house. Because, at heart, he’s still that kid born between countries, trying to be the best son he can.