Watch: Report inconclusive on whether Gov. Northam is in racist yearbook photo

NORFOLK, Va. - An investigation into a racist photo in Gov. Northam's yearbook was not able to conclude who is in the picture, a law firm announced Wednesday.

Eastern Virginia Medical School hired McGuire Woods LLP to investigate how the photo got there and who is in it. Lawyers said after months of review they cannot definitively say. They reviewed documents and spoke to witnesses and said they could not determine the individuals in the photo or the origin of the offensive photo.

The photo, which appears on his page in an EVMS yearbook from 1984, shows two people: One appearing to be dressed in blackface and another appearing to be a member of the Ku Klux Klan.

The attorneys said Gov. Northam made inconsistent statements about the photo and no interviewee said during the investigation that Northam was in the photo. Additionally, no one has come forward say it was Northam in the photo, either.

"We weighed all the evidence," said Richard Cullen from McGuire Woods. "I would say based on that we can't identify either person." 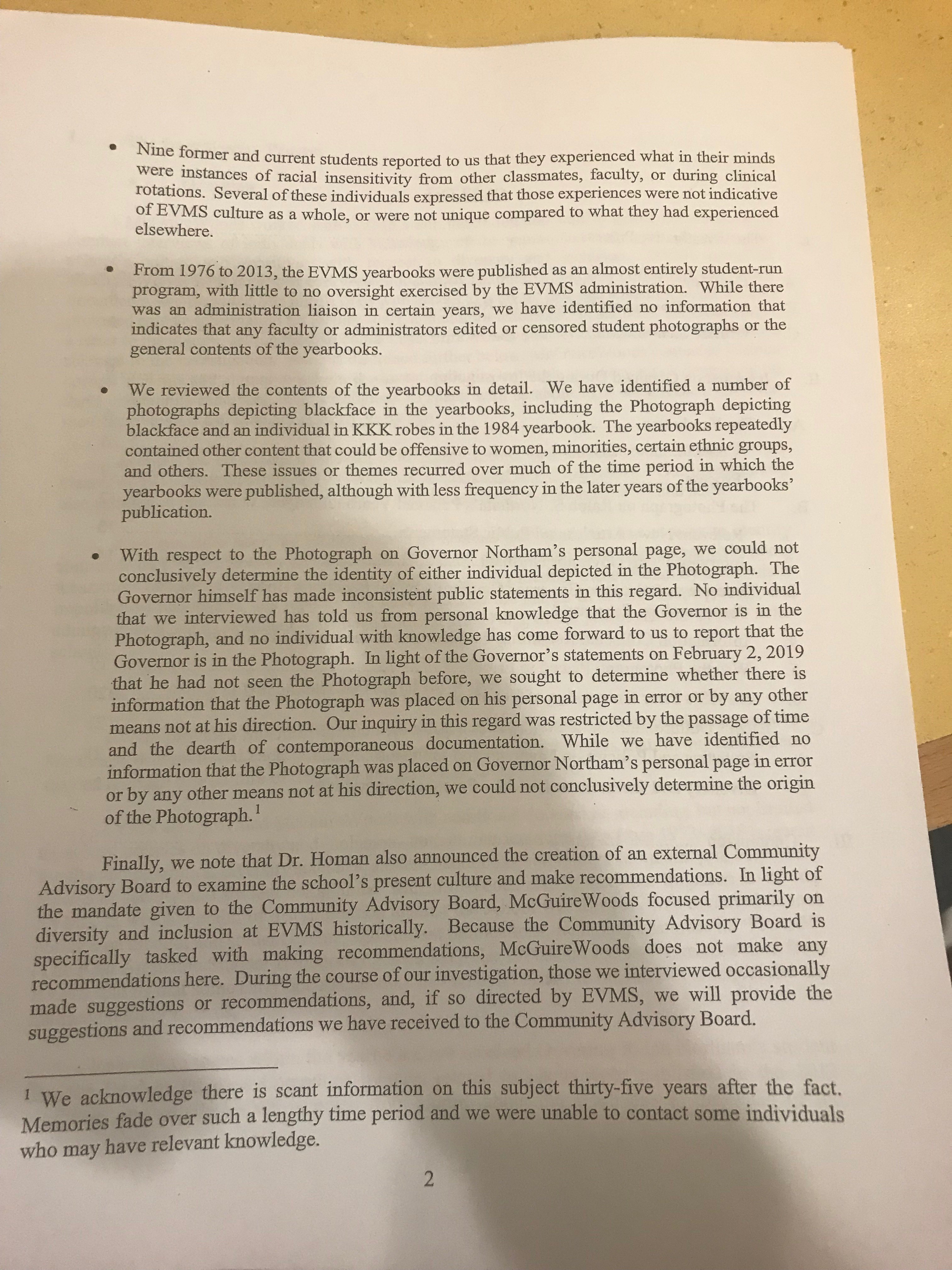 Northam initially apologized for the photo in February, but the next day denied he's in it. The attorneys believe he changed his story because he wanted to be seen as honest and was faced with the dilemma of apologizing or denying. "The best we can conclude is he erred on the side of caution initially and immediately regretted not having denied," said Cullen.

In a statement Wednesday, Northam said that decision "deepened pain and confusion."

For the first time Wednesday, EVMS leaders acknowledged they knew about the photo for years but decided to take no action. An alumni affairs director discovered it while preparing for a reunion.

In addition, two presidents were told about it, including the current one, Dr. Richard Homan. "We're apolitical and I did not feel that was a disclosure I had to make," Homan said, revealing he was told about it during Northam's campaign for governor.

Still, some are upset with the process. James Boyd, the president of the Portsmouth NAACP, showed up at the press conference and asked his own questions. He believes the investigation wasn't truly independent because the law firm was paid by EVMS. "This is a PR campaign to try and heal the image of Ralph Northam," Boyd said.

The report says from 1976 to 2013, students produced the yearbooks with little or no oversight from EVMS administration. EVMS also said in more recent years fewer offensive photos were seen in yearbooks, but in the past several photos were found that are offensive to minorities, women, certain ethnic groups and others. The school stopped printing yearbooks in 2013.

Dr. Homan has since announced the creation of an External Community Advisory Board to examine the school’s culture and to make recommendations on that culture.

“We thank EVMS for its cooperation and responsiveness during the investigation,” said Cullen, who led the investigation for McGuire Woods. “EVMS ensured McGuireWoods had unfettered access to EVMS documents and members of the EVMS community. At no time was our inquiry restricted by EVMS, and the findings and conclusions contained in the report are our own.”

Northam released a statement around 1:30 p.m. Wednesday and said:

“I have cooperated with Richard Cullen and his team over the course of their investigation, both by making myself available for interviews and by turning over the findings of my private inquiry into the matter. I am not in the racist and offensive photo that appears under my name in the 1984 Eastern Virginia Medical School yearbook.

“That being said, I know and understand the events of early February and my response to them have caused hurt for many Virginians and for that, I am sorry. I felt it was important to take accountability for the photo’s presence on my page, but rather than providing clarity, I instead deepened pain and confusion.

“In visits with local leaders across the Commonwealth, I have engaged in frank and necessary dialogue on how I can best utilize the power of the governor’s office to enact meaningful progress on issues of equity and better focus our administration’s efforts for the remainder of my term. That conversation will continue, with ensuing action, and I am committed to working to build a better and more equitable Virginia for all who call it home.”

“Yesterday's investigative report issued on behalf of the Eastern Virginia Medical School provides ample reason for the importance of our elected and party leaders not rushing to judgment based on limited initial evidence.

As a statewide official elected by a sizable majority, Governor Northam was entitled to the benefit of the doubt while all necessary facts and available information were obtained via an appropriate independent investigation. I understand we reside in a fast-paced social media world that demands instantaneous conclusions but the evaluation of long ago events often requires time to evaluate properly. I hope that this report reminds us of the importance of considered judgment, due process, and fundamental fairness. These are pillars of our democracy and our legal system.

The lack of conclusive evidence at the time was why, in my role as an elected official, I chose not to call for his resignation even though I did express serious concern about his actions. I did not and do not condone people using black face or Klan outfits. Public officials who have engaged in either must make serious, substantive, and lasting amends if they are to remain in office.

But I believed that more evidence was necessary before elected officials and party officials could properly pass judgment on decades-old events. I also believed, as an elected official representing the entire Commonwealth, that it was important to consider Governor Northam's actions over the course of his lifetime before I should pass judgment whether he should remain our Governor. Based on what we now know, I believe the stance I took was and is appropriate to the circumstances.

During this course of this process, Governor Northam has committed himself to working to address issues related to racial inequality. I strongly encourage him to continue with those efforts. It is vitally important that we focus on serving the needs of Virginians and improving lives of the residents our Commonwealth.”