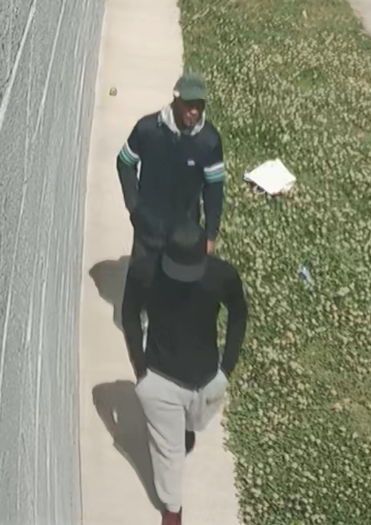 PORTSMOUTH, Va. – Police are looking for a suspect who they believe is involved in the Monday robbery of a local vape shop.

Around 11:11 a.m., officials were informed of an armed robbery that had happened at Spinners Vape, located at 808 Airline Boulevard.

Detectives say that two suspects entered the business, displayed handguns, and demanded money. No one inside the business was injured and the suspects fled the scene on foot.

The first suspect is described as a lighter complected black male who is around 5’8” to 5’10” in height, weighing 150-165 pounds. He had facial hair and acne type scars on his face. He was last seen wearing a long-sleeved blue shirt with green and white stripes around the bicep area, dark colored pants, and a green baseball cap.

The second suspect is described as a darker complected black male about 5’6” in height and wearing a black thermal shirt, black baseball cap, red shoes and light colored sweat pants.

If you recognize the suspects pictured in the surveillance photographs you are urged to call the Crime Line and submit an anonymous tip by calling 1-888-LOCK-U-UP (1-888-562-5887).