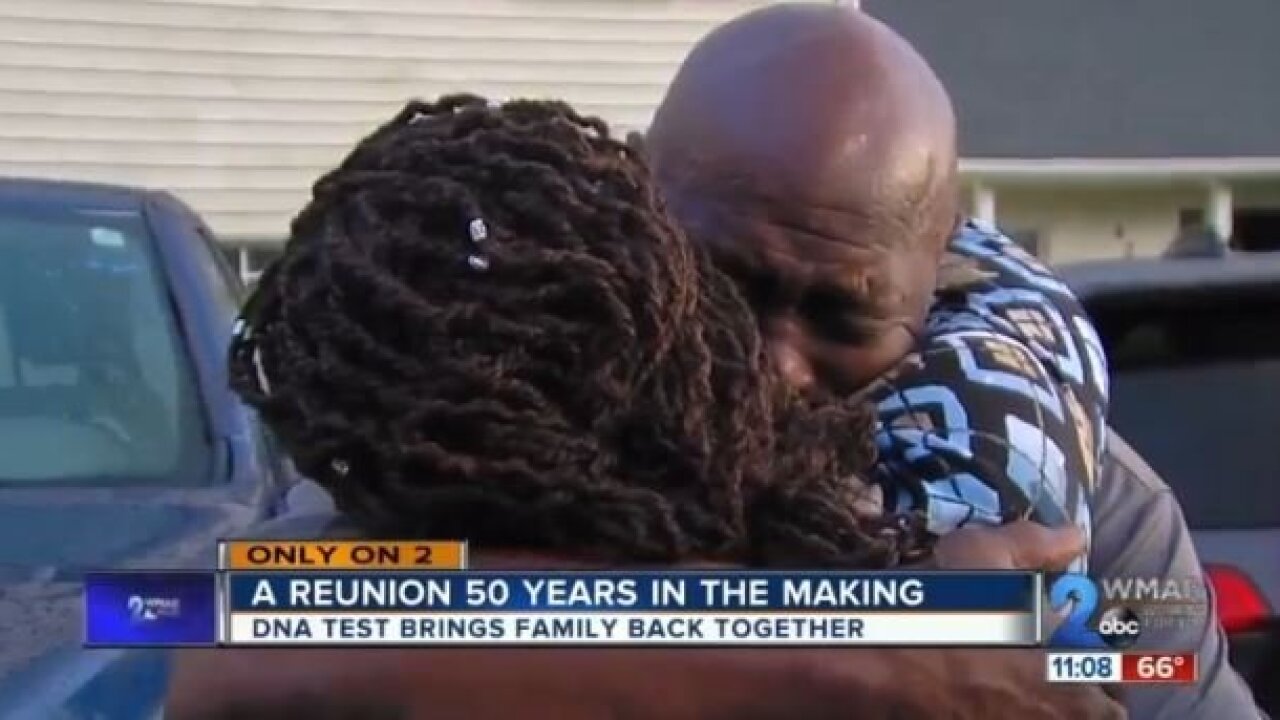 **Embargo: Baltimore, MD** A woman found her dad through a DNA testing and surprised him in his driveway.

Harford County (WMAR) — An elaborate rouse about a made-up wreck.

The witness— someone Arthur Shepard hasn’t seen in 50 years.

“That’s always been there,” Shepard explained as he pointed to a dent in the front of his truck.

He thought the cameras and people were in his driveway because he was in trouble.

But that confusion quickly melted into jubilation when he saw his daughter walk out of the car, through a crowd of family, and into his arms.

“Words can’t explain what I feel right now,” Shepard said with his daughter Brenda Sawyer-Kluttz’s head resting on his shoulder.

They were both praying to find each other.

“It’s overwhelming as it was when she first touched me,” said Shepard. “It’s been a lifelong answer to a prayer.”

Why 50 years? Sawyer-Kluttz said because everything is on Gods time.

She knows family on her mom’s side but never felt whole—until Friday night.

“It’s like two people in the universe looking for each other and having no idea where to look,” Sawyer-Kluttz said. “I guess God thought that today or this is the time for us to be together and that’s why it’s happening now.”

Shepard sat his other three children down when they were young and told them their oldest sister was out there somewhere, but he didn’t know where.

Toni Saunders grew up as the oldest, but as their brother jokingly told her she’s been demoted.

Toni said when she and her siblings started using Social Media dad told them to try and find their sister somehow.

Now they have the chance to talk as sisters about everything that they’ve missed and all that they are looking forward to.

“She was in active military and traveled the world,” Toni Saunders said. “I’m just looking to hearing about all of it.”

Sawyer-Kluttz did a DNA test to start the search.

“I had little to go on, I just had his first name,” she said. “I knew that he was in this city, but I didn’t know where. The last thing I could do was a DNA test, so I did Ancestory.com.”

She didn’t find him, but she did find some cousins who connected them over the phone.

A month of phone calls lead up to this day.

“Everything is such a bonus,” Sawyer-Kluttz said. “I only expected like I’m going to do the test and find him. I found all these family members, and everybody has been so loving to me.”

“He’s a tall one,” Shepard said as Anthony walked up.

Anthony said he only ever knew one cousin and the family he’s known just got a lot bigger in more way than one.

Reconnected and looking forward to taking it one day at a time.

Sawyer-Kluttz is getting married July 27th, and she told the family she just met that they are all invited.

She plans on moving to Okinawa, Japan for her new husbands work.

Now that the family is reunited they were assuring each other no time or distance will pull them apart again.