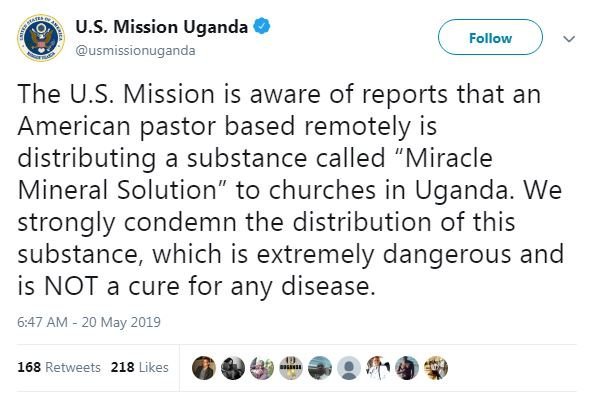 A British man, Sam Little, has been arrested for allegedly distributing a “miracle solution” containing bleach to villagers and churchgoers in western Uganda, police told CNN.

Little, 25, was taken into custody with two Ugandans, Samuel Albert, 27 and Samula Tadeop, 25, on Thursday when police raided a church Little leads known as the Global Healing Christian Missions in Kitembe, near Fort Portal, police said.

Little had been circulating and promoting the Miracle Mineral Solution (MMS) as a cure for HIV/AIDS, malaria and other diseases to Christians in three villages in the area, Rwenzori West Police spokesperson Lydia Tumushabe said.

It was not immediately known how many people consumed the solution and whether they suffered medical problems. Police said they found boxes and sacks of unlabeled bottles containing “the miracle solution” in the church.

Uganda health ministry spokesman Emmanuel Ainebyoona told CNN that the seized substances have been given to health authorities for laboratory testing,

“Police are working with health authorities to ascertain whether the chemicals are dangerous to humans or any living thing. The exhibits have been handed over for laboratory testing, which will form the basis for the charges in court,” he said.

Police say the three suspects are still in custody. CNN is trying to reach them or their lawyers for comment.

According to police, the suspects said they were operating under the leadership of a pastor based in the United States.

The US Embassy in Uganda on Monday said it was aware of reports that an American pastor had been distributing MMS to churches in the country.

It warned those circulating the “dangerous” substance to stop, adding that it could not cure any disease.