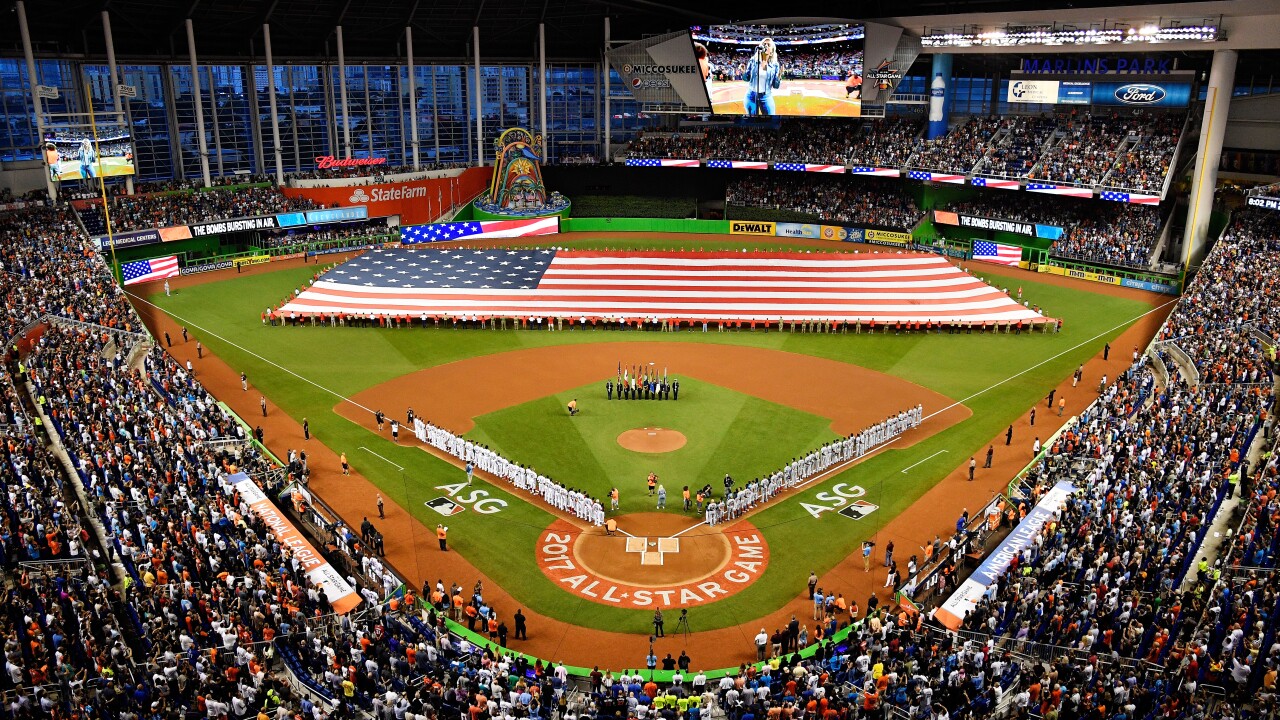 A general view during the national anthem prior to the 88th MLB All-Star Game. (Photo by Mark Brown/Getty Images)

A general view during the national anthem prior to the 88th MLB All-Star Game. (Photo by Mark Brown/Getty Images)

CLEVELAND, Ohio – Major League Baseball will mark the official start of All-Star Balloting today at 2:00 p.m. (ET) for the 2019 MLB All-Star Game presented by Mastercard, which will be held on Tuesday, July 9th at Progressive Field, the home of the Cleveland Indians. MLB also has teamed up with Google to give fans an easy, new way to vote just by searching for “MLB Vote” or the names of their favorite players.

The 2019 Google MLB All-Star Ballot introduces a new format, which will include two phases of fan voting to determine the All-Star starters. Beginning today at 2:00 p.m. (ET) is “The Primary,” when fans around the world can cast their votes exclusively online and via mobile devices at MLB.com, all 30 Club web sites, the MLB At Bat and MLB Ballpark mobile apps and on Google Search (U.S. and Canada only) until the voting period for “The Primary” concludes at 4:00 p.m. ET on Friday, June 21st. Later that evening, during the MLB Network Showcase telecast of the New York Yankees hosting the Houston Astros, the top three vote-getters at each position (and the top nine outfielders) in each League will be revealed on MLB Network, and they will move on to the second phase of voting. During the initial voting period, fans can submit up to five ballots per 24-hour period on MLB platforms, and can vote for every position, or up to 17 unique players per day on Google.

“The Starters Election” will begin at 12:00 p.m. (ET) on Wednesday, June 26th, with fans voting among the finalists at each position during a 28-hour window that concludes at 4:00 p.m. (ET) on Thursday, June 27th. Results of “The Starters Election” will be announced at 7:00 p.m. (ET) that night on ESPN. During this second phase of voting, in which fans can vote once on MLB platforms and submit up to 17 unique player votes on Google, vote totals will reset (i.e., vote totals from “The Primary” do not carry over) and the winner at each position (including three outfielders per League) will be named a starting position player for the 2019 Midsummer Classic.

The AL All-Star Team, which will be managed by Alex Cora of the defending World Series Champion Boston Red Sox, will have nine elected starters via the fan balloting program, while the NL All-Star Team, led for a second consecutive year by Dave Roberts of the defending NL Champion Los Angeles Dodgers, will have eight fan-elected starters. The pitchers and reserves for both squads – totaling 24 for the NL and 23 for the AL – will be determined through a combination of “Player Ballot” choices and selections made by the Commissioner’s Office. The balance of the All-Star rosters will be announced on Sunday, June 30th at 5:30 p.m. ET on ESPN.

During each phase of voting, the 2019 Google MLB All-Star Ballot will be available when fans search in English and Spanish. The ballot at MLB.com and Club sites also will offer audio CAPTCHA functionality for visually impaired fans. Banco BHD León will once again sponsor online All-Star balloting in the Dominican Republic, making Spanish-language ballots available to fans in the Dominican Republic via LasMayores.com, the official Spanish-language web site of Major League Baseball.

Justin Verlander at the All-Star Game.

Fans will once again have the opportunity to participate in the official voting for the Ted Williams All-Star Game Most Valuable Player Award presented by Chevrolet. During the Midsummer Classic, fans can vote exclusively at MLB.com and the 30 Club sites – online or via their mobile devices – with the 2019 All-Star Game MLB.com MVP Vote, and their collective voice will represent 20 percent of the official vote determining this year’s recipient of the Arch Ward Trophy.

The 90th Midsummer Classic will mark the sixth All-Star Game to be played in Cleveland as the Indians become the first Major League franchise to host the All-Star Game on six occasions. Cleveland will also become just the third city to host the event at least six times, joining New York (9) and Chicago (7).