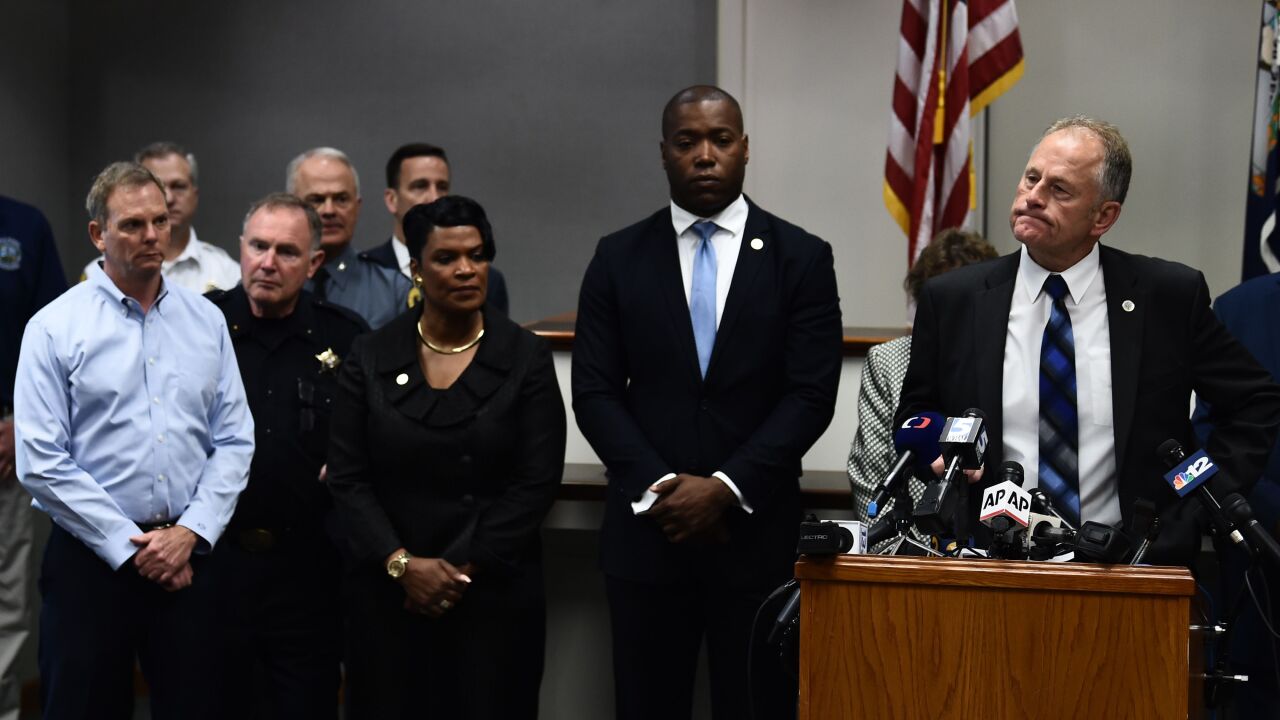 Aaron Rouse (center) during a news conference at the Municipal Center Courthouse June 01, 2019 in Virginia Beach, Virginia. The names of the 12 victims of Friday’s shooting rampage were made public along with the identity of the shooter, city engineer DeWayne Craddock. (Photo by Chip Somodevilla/Getty Images)

Virginia Beach Councilman Aaron Rouse was a student at Virginia Tech 12 years ago when 32 people were gunned down on campus.

It was one of the deadliest shooting rampages in US history.

On Friday afternoon, Rouse’s hometown of Virginia Beach was witness to its own mass shooting. A city employee killed 12 people — including colleagues — at the municipal building where he worked.

<p class="wp-caption-text" id="caption-attachment-723247">Aaron Rouse (center) during a news conference at the Municipal Center Courthouse June 01, 2019 in Virginia Beach, Virginia. The names of the 12 victims of Friday’s shooting rampage were made public along with the identity of the shooter, city engineer DeWayne Craddock. (Photo by Chip Somodevilla/Getty Images)

The pain experienced in Virginia Beach will never go away, Rouse said.

“For some families, it’ll be there always in our hearts and minds, but they’re not alone.”

At Virginia Tech, whose Blacksburg campus is over 300 miles west of Virginia Beach, Rouse said students and faculty were “Virginia Tech Strong.”

“Now we are Virginia Beach Strong,” he said.

“I can tell you, quite frankly, that after the massacre at Virginia Tech our community came together in Blacksburg. Hokies across the world, not even Hokies, but American citizens, we came together. So that’s something we have to do here in Virginia Beach. We will come together, but you have to let those victims and families know they are not alone, we are in this together.”

Rouse also said he remembered feeling “sorry and helpless” after the Virginia Tech shooting. Now, as a councilman of Virginia’s largest city, he says he no longer feels that way.

“I want to be bold in making sure our community is safe,” he said, adding that he didn’t want anything like this to happen anywhere else in America. “We will show our strength here in Virginia Beach.”

Although Rouse was not specific on what he felt needed to be done, he did say actions need to reach beyond prayers and donations.

“I think the first thing we have to do is make sure the families know that we are with them. It’s not enough to continuously offer our thoughts and prayer, we have to start living by those words in which we pray by,” Rouse said, later adding that it’s up to the leaders to stand up and say “no more of this.”

Rouse said he’s taking the lessons he’s learned from the tragedy at Virginia Tech and applying them to this tragedy.

“We must learn from the mistakes of our past,” he said. “We cannot allow these troubled acts to continue.”