VIRGINIA BEACH, Va. - The sound of bagpipes could be heard throughout the buildings surrounding the municipal center in Virginia Beach.

Chris Rapp was one of the 12 victims who died in the mass shooting.

He was also an intricate part of the group Tidewater Pipes and Drums.

Leaders say the group practices every Wednesday night. But instead of practice this Wednesday, they came to the memorial outside of Building 11 to honor a man they loved very much.

“It’s band practice night and Chris can’t come to us, so we decided we needed to come to Chris,” said Jeff Christman, Vice President Of Tidewater Pipes and Drums.

As the rain came down, they played "Amazing Grace" 12 times - standing around the 12 crosses set up to honor the 12 people who lost their lives. 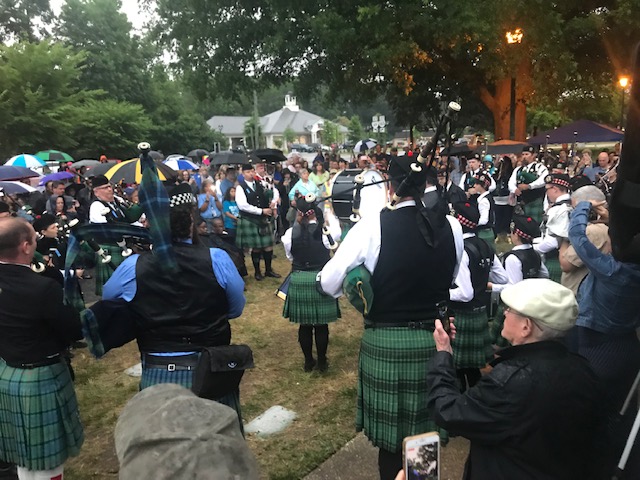 “We waited up to hear from Chris because we knew he was in that building,” said Christman. He said he got a text at 1 a.m. that Chris has died.

“Incredibly sad. You go to work one day and you don’t come home,” said Christman. “I wouldn’t want anyone to have to go through that, ever.”

Wednesday, people came to hear the music and remember the people who were killed.

“Chris had a winning personality. He wasn’t loud or boisterous. He made friends very easily. He actually knew how to play when he walked in the door,” said Christman. He joined the group last fall and moved to Hampton Roads from Richmomd.

They held an empty spot for Chris during the tribute and played music that he liked.

“I would imagine for a good, long while we’re going to dedicate our performances to Chris,” said Christman.

Leaders with Tidewater Pipes and Drums had two other members who work in the building who survived the horrific shooting.

They say tribute was for everyone who has been impacted.