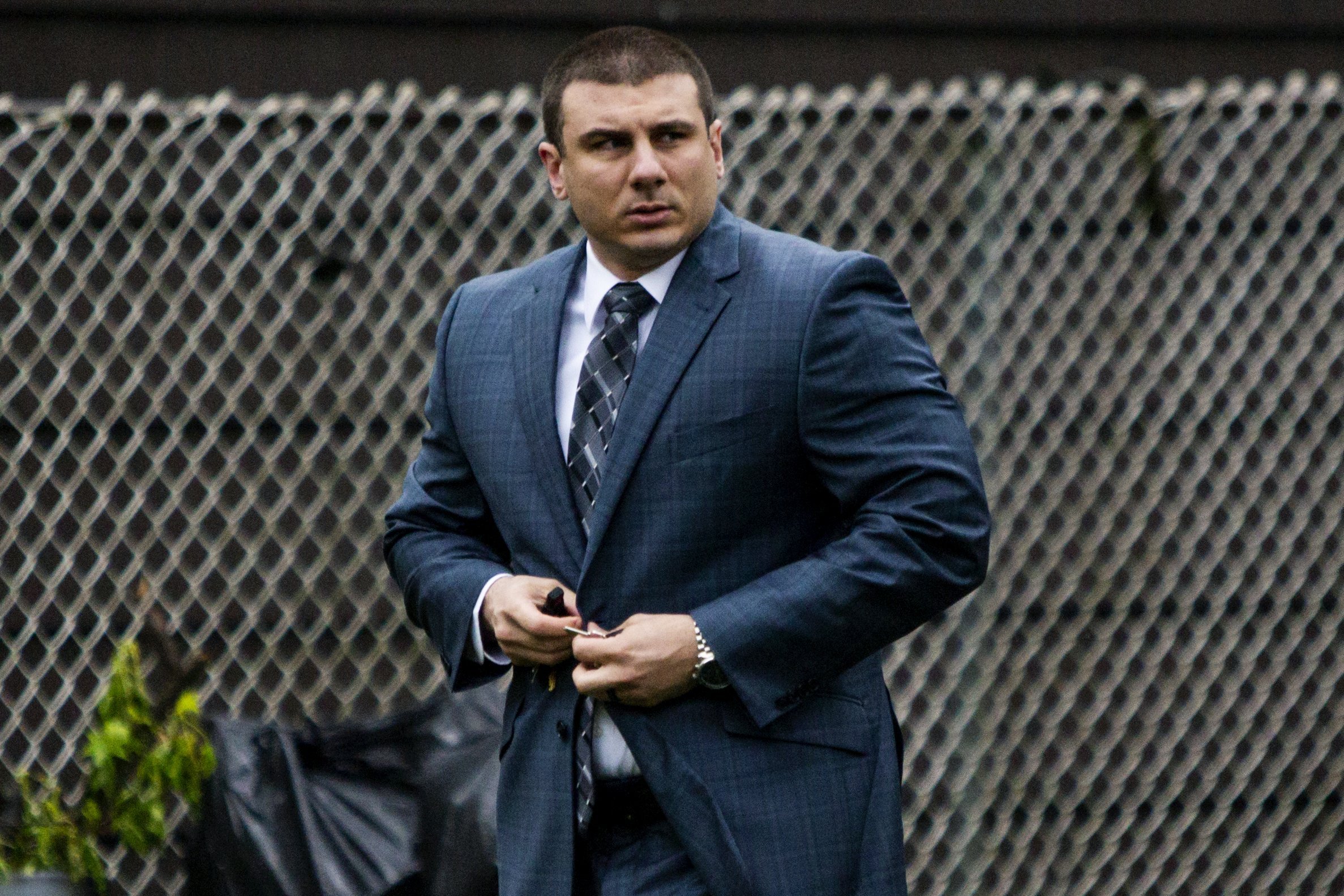 Attorneys delivered final arguments Thursday in the disciplinary trial for New York police Officer Daniel Pantaleo, who did not to take the stand to explain his role in an arrest that allegedly led to Eric Garner’s 2014 death.

Attorney Stuart London said Wednesday he will instead submit a statement that Pantaleo provided as part of a departmental interview after Garner’s death.

The Civilian Complaint Review Board’s Suzanne O’Hare argued that Pantaleo’s refusal to testify should be held against him when the final recommendation is made in his case.

The board, acting as prosecution, seeks to prove Pantaleo used a banned chokehold on Garner. The 43-year-old’s muffled cries of “I can’t breathe” became synonymous with the Black Lives Matter movement, and his death spurred marches and protests across the country.

The defense attorney doesn’t want Pantaleo to testify because there’s a federal investigation underway that won’t conclude until July 18, he said, expressing concern that Elizabeth Geddes, assistant US attorney for the Eastern District of New York, was in the courtroom.

“It’s disconcerting that the US attorney was here, but we have nothing to hide,” he said. “I’m glad she was there to see the doctor’s testimony discount that a chokehold that was utilized caused (Garner’s) demise when it obviously was his compromised cardiovascular system.”

Geddes left the courtroom after London said his client would not testify. A spokesman for her office declined to comment.

Before Geddes left, London called to the stand a St. Louis medical examiner who challenged the original medical examiner’s conclusion that the chokehold was “part of the lethal cascade of events” that killed the father of six.

“I think it was heart disease that was exacerbated by his interaction with law enforcement,” Michael Graham testified.

Also called to the stand was retired Sgt. Russell Jung, Pantaleo’s police academy instructor. He echoed earlier defense witness testimony that Pantaleo’s takedown was not a chokehold, but a “seatbelt maneuver.” He said, however, that he had not taught Pantaleo the seatbelt move during his 2006 training.

“There’s a million maneuvers we do in the street that we’re not trained to do,” Jung said, drawing groans and gasps from some in attendance.

Here’s what you need to know as the proceeding winds to a close:

Maldonado, who is acting as judge, has heard from 14 witnesses in six days of testimony.

The final determination will be left to police Commissioner James O’Neill, who has no deadline to make his decision.

Pantaleo has been placed on modified assignment and stripped of his badge and gun. He remains on the department’s payroll. A local grand jury declined to indict him in 2014.

Federal prosecutors have until July 18, five years and a day after Garner’s death, to decide whether to pursue charges.

Without conceding liability, New York City Comptroller Scott Stringer in 2015 issued a $5.9 million check to Garner’s family, saying the payout was “in the best interests of all parties.” The police union has denounced the decision.

What do prosecutors say?

Video shows Pantaleo wrapping one arm around Garner’s neck and another under his arm as officers take him to the ground, which prosecutors say constitutes a “explicitly, unequivocally” banned chokehold that the New York Police Department hasn’t allowed since the 1990s.

In the days after Garner’s death, medical examiner Floriana Persechino’s office announced Garner’s cause of his death was “compression of neck (choke hold), compression of chest and prone positioning during physical restraint by police.” Police initially said Garner suffered a heart attack on the way to the hospital.

Though the defense and police union cast doubt on her office’s conclusion, Persechino stuck to her findings on the stand, saying Pantaleo’s chokehold caused Garner to suffer an asthma attack.

Explaining that “application of pressure to the anterior neck is a painful phenomenon,” Persechino said Garner’s neck displayed fresh hemorrhaging when she examined him.

“In my opinion, the hemorrhaging was due to compression of the neck by the chokehold,” she said.

Shown footage of the arrest, she said, “In my opinion, that’s a chokehold” — a finding with which Inspector Richard Dee, the commanding officer for the New York police’s training section, concurred during his testimony.

What does the defense say?

Evidence indicates Garner was accused of selling “loosies,” or single cigarettes — something he had been arrested over in the past — in the Tompkinsville neighborhood of Staten Island.

London and the police union say Pantaleo acted in accordance with his training in taking Garner down. The 350-pound Garner, they allege, resisted arrest and died from obesity and pre-existing health conditions. The medical examiner concluded Garner had an enlarged heart and suffered from hypertension.

“(Garner) was a ticking time bomb and set these facts in motion by resisting arrest,” the attorney said.

Cross-examining Persechino, London said the encounter was brief and it’s unclear how much pressure was applied to Garner’s neck.

“I cannot quantify how much pressure, no,” Persechino testified.

“A grand jury of regular New Yorkers has already reviewed the same evidence and come to that conclusion,” he has said. “This disciplinary trial must yield a similar result.”

What does the family say?

Garner’s mother, Gwen Carr, has called for Pantaleo to be fired and for disciplinary proceedings to be brought against other officers involved in her son’s arrest.

The New York Police Department is expected to launch disciplinary proceedings against Pantaleo’s supervisor, Sgt. Kizzy Adonis, one of the first officers to respond to the scene.

Carr has shaken her head, averted her eyes and, at times, left the room when video of the altercation was played in court. She says it’s difficult “beyond belief” to watch the video of her son’s arrest. Family members and the Rev. Al Sharpton have given her support during the hearing.

After a particularly taxing day of testimony, Carr told reporters that after five years she simply wants justice. She has accused London of twisting the facts and witnesses’ answers.

“I’m tired of the lies and misdirection from Daniel Pantaleo’s lawyers,” she said in a statement last month. “They can call Pantaleo’s chokehold whatever fancy term they want to try to confuse people; it doesn’t matter — because the facts and the video speak for themselves.”

Outside police headquarters Thursday, Carr told cheering supporters, “The trial is over today, but we need to continue. We will not let this die. … We will keep my son’s legacy alive. If they think we are going away, they are sadly mistaken.”