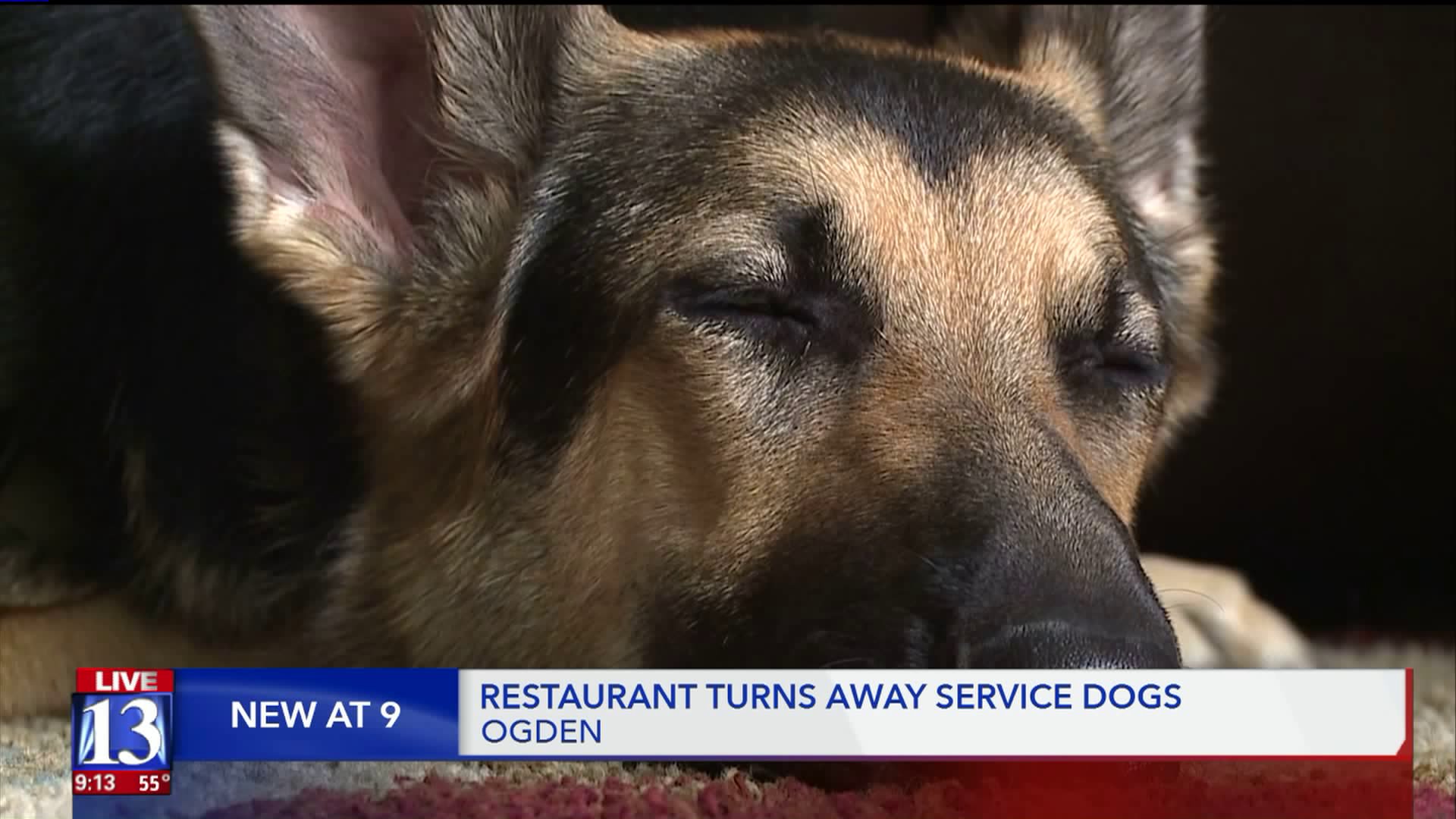 OGDEN, Utah — A restaurant is under fire after customers said the owner won't allow service dogs inside.

Customers described two instances two weeks apart in which they said the owner of Bombay Grill in Ogden refused to serve them if they sat inside with their dogs.

Missy Warwood said she, her husband, her 5-year-old son Jefferson and Jefferson's service dog, Sage, tried to eat at Bombay Grill for her birthday at the end of May.

She said Jefferson has Down syndrome and doesn't speak. Sage, she said, is considered Jefferson's medical equipment.

"Out and about, Jefferson wanders and runs and doesn't sit still," she said.

Sage keeps Jefferson safe and calm, she said, and allows them to live life normally in public.

When they walked into Bombay Grill, she said the owner immediately turned them away and told them, "no dogs."

"We tried to educate him, and let him know that we have every right to be here. It's my son's service dog. He needs it," Warwood said, recalling her conversation with the owner. "And he said, 'No. It's my opinion, it's my restaurant. And I say, no dogs.'"

They left the restaurant and posted the ADA regulations online to the restaurant's Facebook page, asking them to read up on the laws.

The regulation law requires businesses that serve the public, such as restaurants, to allow customers to bring their service animals into areas where customers are allowed.

It bans restaurants from discriminating against people with disabilities.

Just under two weeks later on Thursday, a group of veterans who know each other through the service dog organization 4 Paws 4 Patriots said they attempted to eat at Bombay Grill for lunch.

Abraham Swank said his service dog, Temperance, helps him with his mobility and anxiety. Swank said he wouldn't be able to leave the house by himself or go in public otherwise.

D Berard said Xena helps her with medical issues, in addition to PTSD.

"I also have severe hearing loss," Berard said. "If there's something behind me that I'm unaware of, she'd make me aware of it."

When they walked into Bombay Grill and sat down, they said the owner gave them the same response as he gave to Jefferson's family.

In a cell phone video taken by James Mann, who was with his service dog Potter, the owner looks at them and says, "Sir. No dogs."

The group tries to explain to the owner that denying them service is like denying someone in a wheelchair and that under law they have a right to be there.

In the video, the owner says, "I know," but goes on to tell them he still doesn't allow dogs. The owner offers to serve the group outside, but the veterans said there was no seating area outside and it was too hot.

When they continued trying to speak with the owner, he told them the restaurant was closed. The owner told KSTU he closed the restaurant until the group left, then he reopened.

Bombay Grill told KSTU they do not allow dogs of any kind because they worry about if other customers are afraid of dogs.

The owner said on the phone his restaurant is his responsibility and described an incident where a dog attacked a customer.

When asked about the ADA laws, the owner said he knew the laws and has read them. He said he still stands by his policy, and that customers with service dogs can either order to-go or sit outside.

When Berard and the others were turned away Thursday, they described it as not being just about a business disobeying the law.

"I want them to understand, it's not just the act of rejecting an animal," Berard said. "They are also rejecting a person, an individual, who has a disability that they are already living with every single day."

While Berard's group and Warwood indicated they hoped Bombay Grill would make changes, they said they also hoped to spread awareness and understanding about service dogs, how they help daily life and why it's important businesses don't turn them away.