Portsmouth Sheriff’s Office Sgt. gives young boy a bike after his was stolen

PORTSMOUTH, Va. - A sergeant with the Portsmouth Sheriff's Office has just made one boy's summer a whole lot better.

While Sgt. Cullen and his partner, Deputy Scott Robertson, were speaking with residents at Dale Homes, a young boy named A' Mari told them about how his bike had been stolen.

“He said he liked our bikes," Sgt. Cullen told News 3. "We said, ‘You got a bike? You can come ride with us,' then he looked sad again and he said that somebody had stolen his bike.”

A'Mari's mother, Britney Jones, told us his bike was stolen in May. He had gotten it for Christmas.

“It was a lot for him because he didn’t have nothing to do," Jones explained.

Prior to getting the bike, the sergeant got permission from Jones.

She told News 3's Brian Hill she was shocked by the gesture.

"I felt great because it’s a lot of officers out here are really good as people," she explained.

Cullen also got A'Mari a helmet and a lock.

“He was all excited, and he immediately wanted to get on and go riding. We said, ‘No, the first thing we are going to do is show you how to use a lock,'" he explained.

On Monday, Cullen delivered on his promise to the boy, and now he can ride safely and enjoy his summer!

As part of the PSO's Sheriff's Anti-Violence Effort, or S.A.V.E, deputies are in community on foot, bike or vehicle patrol.

On Tuesday, the three were out biking around the neighborhood and playing.

Sgt. Cullen hopes these interactions are not  just for a moment.

“In a few years, he’s gonna be facing all kinds of challenges. If we can form long-term relationships with the kids in the community and get them to understand that we are here, that when those challenges come, they have someone they can talk to," Sgt. Cullen explained. 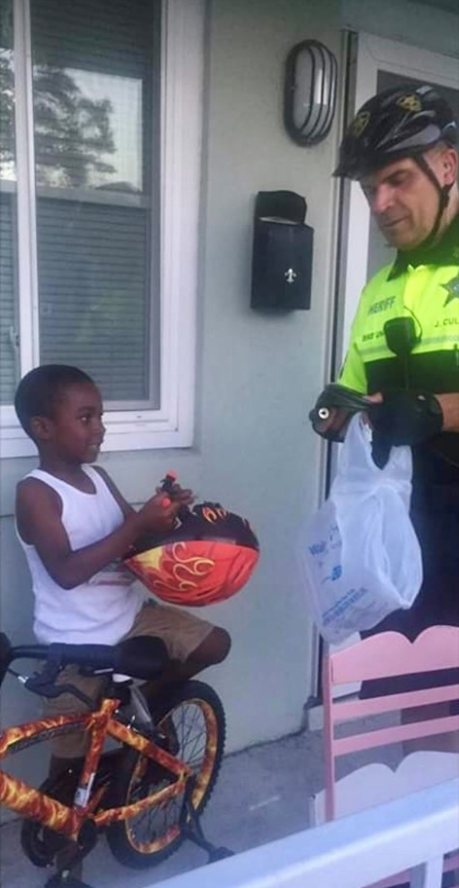