The next rover will offer the clearest view of Mars yet, plus a helicopter 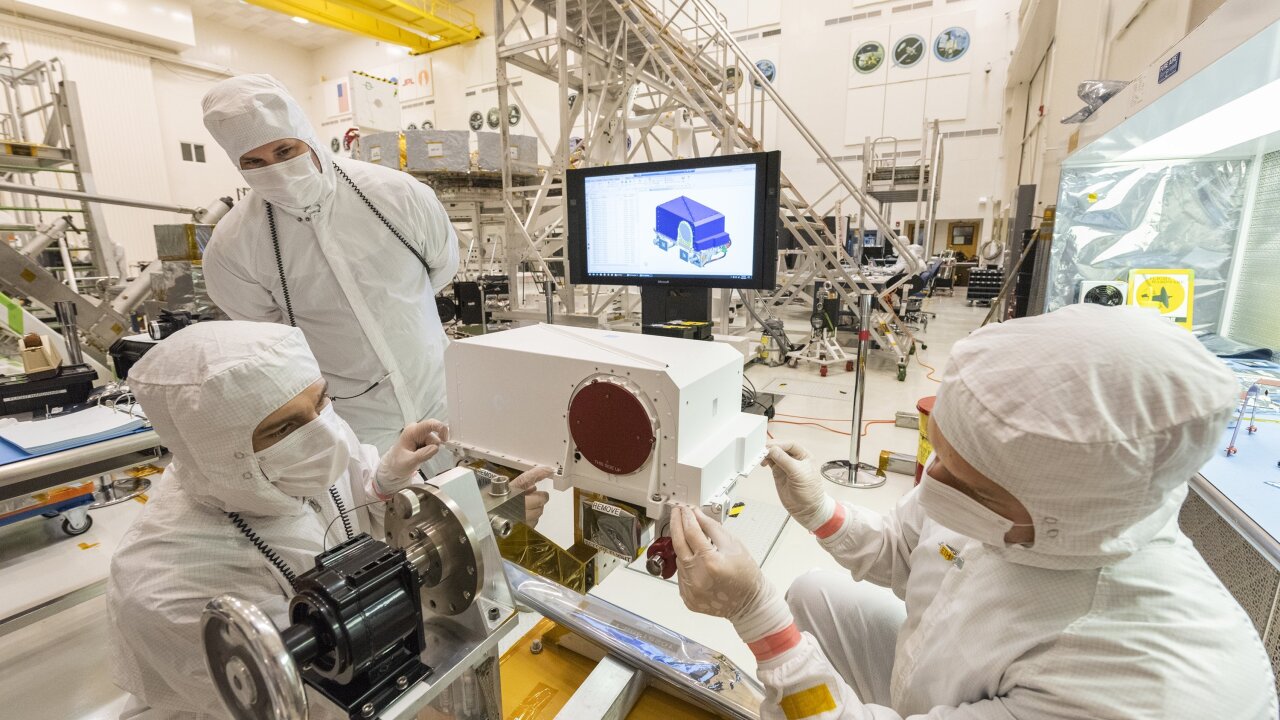 While NASA’s Curiosity rover is digging up clay minerals on Mars, the 2020 rover is suiting up for its departure to the Red Planet in July next year.

The Mars 2020 rover will land at Jezero Crater on February 18, 2021. One of the first things it will do after landing is raise the remote sensing mast, known as the RSM, which act as its eyes. Tucked underneath the rover will be the first helicopter to fly on Mars.

The Mars 2020 rover will herald many firsts. It will collect rock and soil samples and store them for future missions to collect and return to Earth. And it will be able to retarget its touchdown point as it lands.

“Mastcam-Z will be the first Mars color camera that can zoom, enabling 3D images at unprecedented resolution,” said Mastcam-Z Principal Investigator Jim Bell. “With a resolution of three-hundredths of an inch [0.8 millimeters] in front of the rover and less than one-and-a-half inches [38 millimeters] from over 330 feet [100 meters] away — Mastcam-Z images will play a key role in selecting the best possible samples to return from Jezero Crater.”

The rover has been going through many tests as it closes in on a year from launch. Recently, the Lander Vision System went on a test flight aboard a helicopter in Death Valley. It also went through preparations for extreme temperatures and destructive levels of sound and vibration testing expected during landing.

“First we blast it with sound to make sure nothing vibrates loose,” said David Gruel, the Mars 2020 assembly, test and launch operations manager at NASA’s Jet Propulsion Laboratory. “Then, after a thorough examination, we ‘put it in space’ by placing the spacecraft in this huge vacuum chamber we have here at JPL. We pump out the atmosphere, then chill parts of it and cook others while testing the performance of the entire spacecraft.”

Getting things right while the rover is still on Earth is critical to ensure that things will go smoothly once it’s on Mars.

“This is the most comprehensive stress test you can put a spacecraft through here on Earth,” Gruel said. “We flew in our simulated space environment for a week and a day, checking and rechecking the performance of every onboard system and subsystem. And everything looked great — which is a good thing, because next time this spacecraft stack hits a vacuum, it will be on its way to Mars for real.”

The Mars Helicopter, the first of its kind, has been going through similar tests. It will arrive on the Red Planet stowed under the rover.

“Getting our helicopter into an extremely thin atmosphere is only part of the challenge,” said Teddy Tzanetos, test conductor for the Mars Helicopter at JPL. “To truly simulate flying on Mars we have to take away two-thirds of Earth’s gravity, because Mars’ gravity is that much weaker.”

The helicopter is just the latest spacecraft to join the fleet of vehicles they have built and tested for exploring our solar system.

It will act as a scout for targets to be studied on Mars and help plan the most efficient driving routes for the rovers.

“Watching our helicopter go through its paces in the chamber, I couldn’t help but think about the historic vehicles that have been in there in the past,” said MiMi Aung, project manager for the Mars Helicopter at JPL. “The chamber hosted missions from the Ranger Moon probes to the Voyagers to Cassini, and every Mars rover ever flown. To see our helicopter in there reminded me we are on our way to making a little chunk of space history as well.”

And don’t forget that you still have time to send your name to Mars, aboard the 2020 rover.