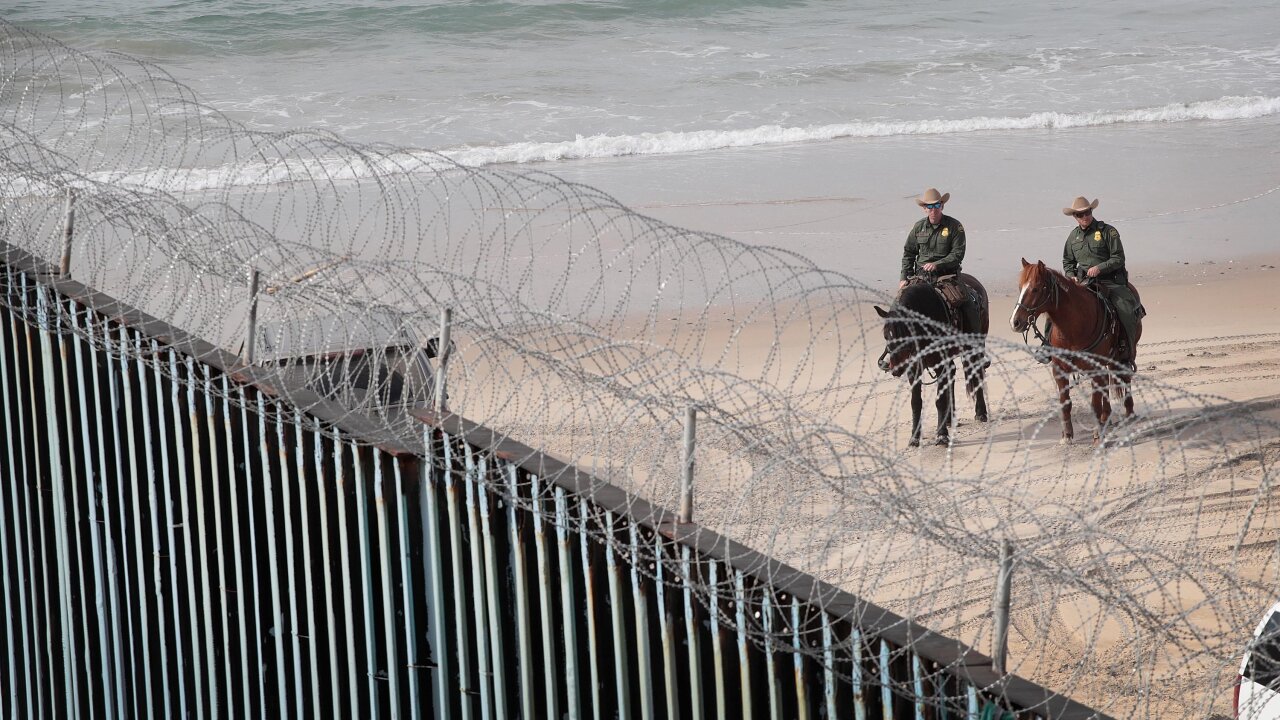 Republican Senate leaders said Wednesday they won’t negotiate with House Democrats over differences in their chambers’ emergency funding bills for the border, essentially daring the House to take or leave the Senate bill, which has bipartisan backing and the expected support of President Donald Trump.

The Republican-led Senate on Wednesday passed a $4.6 billion bill to address the migrant crisis at the southern border, setting up a clash with House Democrats, who have passed a different version of similar legislation.

Republican Senate leaders have said they won’t negotiate with House Democrats over differences in their chambers’ emergency funding bills for the border, essentially daring the House to take or leave the Senate bill, which has bipartisan backing and the expected support of President Donald Trump.

Republican Senate leaders said Wednesday they won’t negotiate with House Democrats over differences in their chambers’ emergency funding bills for the border, essentially daring the House to take or leave the Senate bill, which has bipartisan backing and the expected support of President Donald Trump.

The Senate vote was 84-8 and came after an emotional debate highlighted Wednesday morning by Senate Minority Leader Chuck Schumer’s display of a blown-up image on the Senate floor depicting a shocking photo of a Salvadoran father and his daughter who drowned trying to cross the Rio Grande.

It’s unclear whether the Senate and House can reconcile their bills before Congress breaks for a month-long recess later this week. Earlier Wednesday, Trump and House Speaker Nancy Pelosi spoke earlier Wednesday in an attempt to reconcile the two bills, with the President describing their chat as a “good conversation.” But asked if House Democrats will take up the Senate bill, Pelosi firmly said, “no.”

“They passed their bill, we respect that. We passed our bill, we hope they will respect that. And if there’s some improvements that we think can be reconciled,” she said.

Schumer called for the House and Senate to immediately negotiate about differences between the two bills, though South Dakota Sen. John Thune, a high-ranking GOP leader, told reporters talks to merge the two bills would “delay” getting needed funds to the border.

“They need the money now,” Thune said. “The situation down there, as we all know, is pretty dire. And so, if they say let’s go to conference when we get back, I just don’t think that’s a viable position.”

He later said he expects the House to take up the Senate bill this week and doesn’t foresee Congress leaving for recess without approving the emergency funding.

Republican Sen. Richard Shelby, the chair of the Senate Appropriations committee, told reporters after the Senate passed its border funding bill that if the House and Senate try to reconcile their two border aid bills,”there’s a lot of differences that need to be dealt with.”

Shelby cautioned the differences “are not that small.”

The House of Representatives voted Tuesday to approve $4.5 billion in aid for the growing crisis at the border, and the bill has significant differences with the Senate proposal. The House vote followed Democratic infighting over the package and a White House veto threat.

It’s not clear whether the House and Senate would be able to reach an agreement the President would sign off on or if Trump would back the GOP-led Senate bill. A message left with the White House Wednesday morning was not immediately returned.

Thune was asked if it would be tenable for Democratic and Republicans lawmakers to return home and attend Fourth of July parades and barbecues with shocking images coming out of the border now.

“I don’t think so. That’s why I think we can pass the bill today, the House is still here, they’ve got time to do it. They could easily take it up, put it to the President’s desk and it would get his signature,” he said.

House Democratic leaders secured the passage of the border funding bill after making several updates to the measure in response to concerns within the caucus and working to quell a progressive rebellion.

If the House votes on the Senate’s border bill, it will likely face resistance among some progressive Democrats in the House.

Rep. Raúl Grijalva, Democrat of Arizona, told CNN he would not support it, criticizing the Senate’s legislation for lacking restrictions on how the funds could be used. House Democrats have pushed for stricter requirements to provide better medical and housing conditions for children.

“If the Senate version only comes back here, it’s going to have a difficult time,” Grijalva said.

Rep. Adriano Espaillat, Democrat of New York, said it was “legislative malpractice” for the Senate to not pass the House bill.

“To deny immediate help to (children) because we may want more funding for law enforcement, or we may want money for the wall, is legislative malpractice,” Espaillat said. “More children will die.”

The growing humanitarian crisis on the southern border was further galvanized Tuesday afternoon after the release of the shocking image depicting the drowned corpses of the father and daughter. Their bodies were found Monday near Matamoros, across the river from Brownsville, Texas.

Schumer described the photograph, where the father and daughter are “holding on to each other,” he said, “her tiny head tucked inside his shirt, her arm draped around his neck.”

“President Trump I want you to look at this photo,” Schumer said. “These are not drug dealers or vagrants or criminals. They are people simply fleeing a horrible situation in their home country for a better life.”

Senate Homeland Security Chairman Ron Johnson, R-Wisconsin, appeared to choke up when referring to the photo during a Senate immigration hearing.

“Now I realize tragedies occur all over this country, all over the world. I don’t want to see another picture like that on the US border,” Johnson said, later adding. “We need to start doing something. It’s well past time.”