Harris confronts Biden over past efforts to block busing: ‘That little girl was me’

Kamala Harris took command of the debate stage on Thursday night time after time — from quieting a chaotic stage by admonishing her rivals not to engage in a food fight to demolishing Joe Biden with an impassioned critique of his comments about working with segregationists and his record opposing aspects of busing.

In what was unquestionably the most difficult moment of the night for the former vice president and front-runner, Harris challenged him for invoking his work with segregationists at a recent fundraiser. She then went on to disassemble his record on busing.

It was a spell-binding moment that showed not only her skills as a tough and unsparing debater, but also the fierce side of her persona, which her supporters believe will be devastating up against President Donald Trump.

“Vice President Biden, I do not believe you are a racist, and I agree with you, when you commit yourself to the importance of finding common ground. But I also believe — and it’s personal — it was actually hurtful to hear you talk about the reputations of two United States senators who built their reputations and career on the segregation of race in this country,” Harris said.

She said Biden had worked to prevent the Department of Education from integrating school busing during the 1970s, and that decision hurt a little girl in California.

“That little girl was me,” Harris said with emotion swelling in her voice. “So I will tell you that on this subject, it cannot be an intellectual debate among Democrats. We have to take it seriously. We have to act swiftly.”

After a feisty and vigorous fight night among the other 10 candidates in Miami Wednesday night, Biden shared the stage Thursday, with his closest rival Sen. Bernie Sanders, as well as Harris and South Bend, Indiana, Mayor Pete Buttigieg, who have piqued the interest of Democrats looking for a fresh generation of leadership in the White House. It was the first test for the former vice president since he left government in January 2017, and he aimed to show that he has the kind of message discipline that has been lacking in some of his past debate performances over his lengthy career in politics. 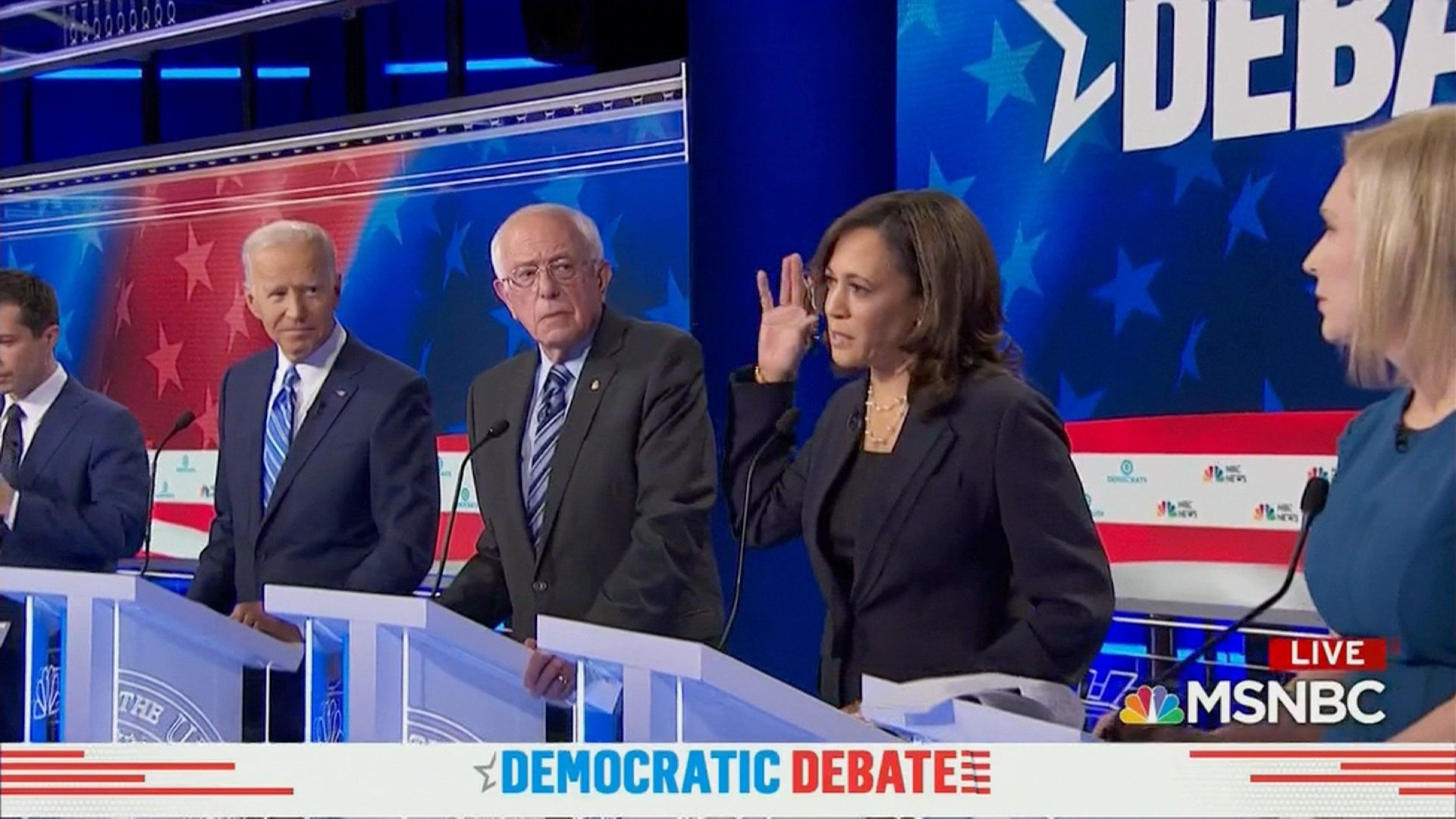 With his voice rising, Biden attempted to strike back, calling Harris’ remarks a “mischaracterization of my position across the board.”

“I do not praise racists. That is not true,” he said. “Number two, if we want to have this litigated on who supports civil rights, I’m happy to do that. I was a public defender. I was not a prosecutor. I left a good firm to become a public defender when, in fact, my city was in flames because of the assassination of Dr. King…. Everything I have done in my career, I ran because of civil rights and continue to think we have to make fundamental changes and those civil rights, by the way, include not just African Americans, but the LGBT community.”

But Harris leapt back in to press Biden on his record on busing. “But do you agree today that you were wrong to oppose busing in America then? Do you agree?” she pressed.

“I did not oppose busing in America,” Biden said, explaining, “what I opposed is busing ordered by the Department of Education, that’s what I opposed.”

But Harris brushed aside his explanation that he preferred to allow localities to make those decisions, pressing on to devastating effect: “There was a failure of states to integrate schools in America. I was part of the second class to integrate Berkely, California, Public Schools, almost two decades after Brown v. Board of Education.” Biden interrupted–“Because your City Council made that decision.”

Biden eventually seemed to concede the exchange, simply saying, “My time is up.”

Biden fends off the other candidates

Moments into Thursday night’s Democratic debate, it was clear that Joe Biden faces a tall task in the months before the Iowa caucuses — proving to Democratic voters that he can fill the mantle of being “progressive enough” as other leaders continue to drag the party further and further to the left.

While Biden burnished those credentials as Barack Obama’s vice president, he now stands closer to the center than contenders like Bernie Sanders, along with Elizabeth Warren, who has made an impassioned case for “Medicare-for-All” and doing away with private health insurance — a dramatic policy shift that is unlikely to go over as easily with the moderates and independents that Democrats must win to retake the White House.

For months, Biden has been on a glide path as the Democratic front-runner, holding far fewer events than his rivals and engaging in relatively few one-on-one interviews. That’s made it easy to avoid the mistakes and gaffes that marred his previous attempt to win the White House, even if he’s still stepped on his own feet a few times with his shifting position on federal funds for abortions and his comments about working with segregationist senators.

Those missteps allowed some of Biden’s lesser-known competitors to make headlines at his expense. Biden and Sanders could clash onstage tonight, not only because they have major policy differences, but also because the Vermont senator must do something to reverse his decline in the polls as Sen. Elizabeth Warren has ascended.

Swalwell was the first candidate to take specific aim at Biden, referring to a presidential candidate who came to California when Swalwell was 6 and said it was time to pass the torch to a new generation.

Biden brushed off that criticism.

“I’m still holding on to that torch,” Biden said.

At times, up against the fire and emotion of Harris’ answers on topics like immigration and the smooth, succinct answers of Buttigieg, Sanders and Biden appeared to recede into the background.

But Biden and Sanders did have a notable exchange over their differences in foreign policy — a debate that clearly will continue to play out on the campaign trail.

Biden, in one of the many moments where he referenced his work with Obama, said the former President tasked him with getting combat troops out of Iraq.

“I was responsible for getting 150,000 combat troops out of Iraq and my son was one of them. I think we should not have combat troops in Afghanistan. It’s long overdue and should end,” Biden said. “You are not going to find anybody who pulled together more to deal with what is the real threat out there. We cannot go it alone in terms of dealing with terrorism.”

He added that he would put a great deal of effort into repairing alliances around the world. “That’s what I would do and have done and know how to do it.”

Sanders immediately pounced. “One of the differences that Joe and I have in our record is Joe voted for that war, and I helped lead the opposition to that war, which was a total disaster.”

In an answer that showed how the party is drifting further to the left, Sanders unapologetically advocated for his plan for “Medicare-for-All” and made no excuses for the fact that taxes for the middle class would go up under his plans while arguing their health care costs would go down.

“We have a new vision for America,” Sanders said. “At a time when we have three people in this country owning more wealth than the bottom half of America while 500,000 people are sleeping on the streets today. We think it is time for change.”

It was a moment early in the debate that was firmly on Sanders’ ground, as many candidates were left attempting to answer questions about his signature health insurance policies.

Biden followed by making a safer argument that he could lead major change in the economic system by reversing Donald Trump’s tax cuts. “Donald Trump thinks Wall Street built America; ordinary middle class Americans built America,” Biden said. “Too many people in the middle class have seen the bottom fall out. … Look, Donald Trump put us in a horrible situation. We do have enormous income inequality. The one thing I agree on is we can make massive cuts in the $1.6 billion in tax loopholes and I would be going about eliminating Donald Trump’s tax cut for the wealthy.”

Harris immediately took the opening to weigh in with the core argument of her candidacy: “Working families need support and need to be lifted up and frankly, this economy is not working for working people,” he said. “For too long, the rules have been written in favor of the people who have the most and not in favor of the people who work the most.”

Several of the lower tier candidates however took on Sanders and his ideas — predicting that average Americans would be spooked by the fact that he identifies as a Democratic socialist.

Hickenlooper warned that the specter of socialism would give Republicans an opening to “come at us every way they can.”

But Sanders defended his potential to take on Trump by citing the latest head-to-head matchups with the President as proof.

“The polls have us 10 points ahead of Donald Trump because the American people understand that Trump is a phony; Trump is a pathological liar and a racist, and he lied to the American people during his campaign,” Sanders said. “President Trump you are not standing up for working families when you try to throw 32 million people off their health care that they have; and 83% of your tax benefits go to the top 1%. That is how we beat Trump. We expose him for the fraud that he is.”