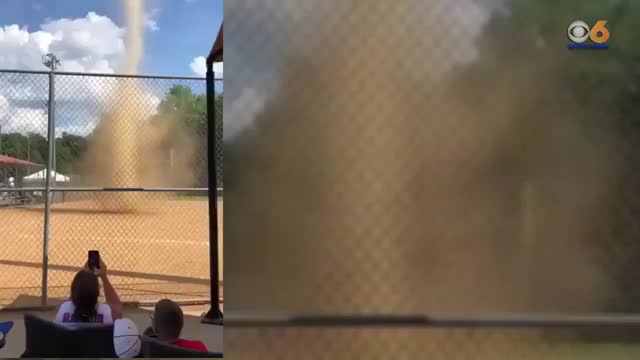 Ginger Rutherford said the dust devil "suddenly showed up in the middle of play" during Game 4 around 4:10 p.m.

"Many boys were in awe, a few were really frightened and ran, some asking if it was a tornado," Rutherford said.

“Do you see that?” one spectator can be heard saying as the dust devil moves across the field.

"Daddy!” one child screams in the video captured by Melanie McCollum.

Another child says he can see a rainbow before the whirlwind abruptly dissolves as it nears the side of the field.

The game was paused while officials waited for the dust devil to dissipate. The players then returned to their positions and the game continued.

WTVR Meteorologist Mike Goldberg said the hot weather helped the dust devil form since the phenomenon is caused by the uneven heating of surfaces.

“You have the dirt surface and then the grass,” Goldberg explained. “And if you noticed, it formed over the dirt because the dirt heated up a lot quicker than the grass. And that led to a rising column of air.”

Goldberg said dust devils feed off heat, so as long as it stayed over the dirt on the field, it was continually gaining more heat from the dirt.

Accordingly, the dust devil dissipated as it exited the field because of cooler air.

“Cooler air gets sucked in and that leads to it evaporating,” Goldberg said.