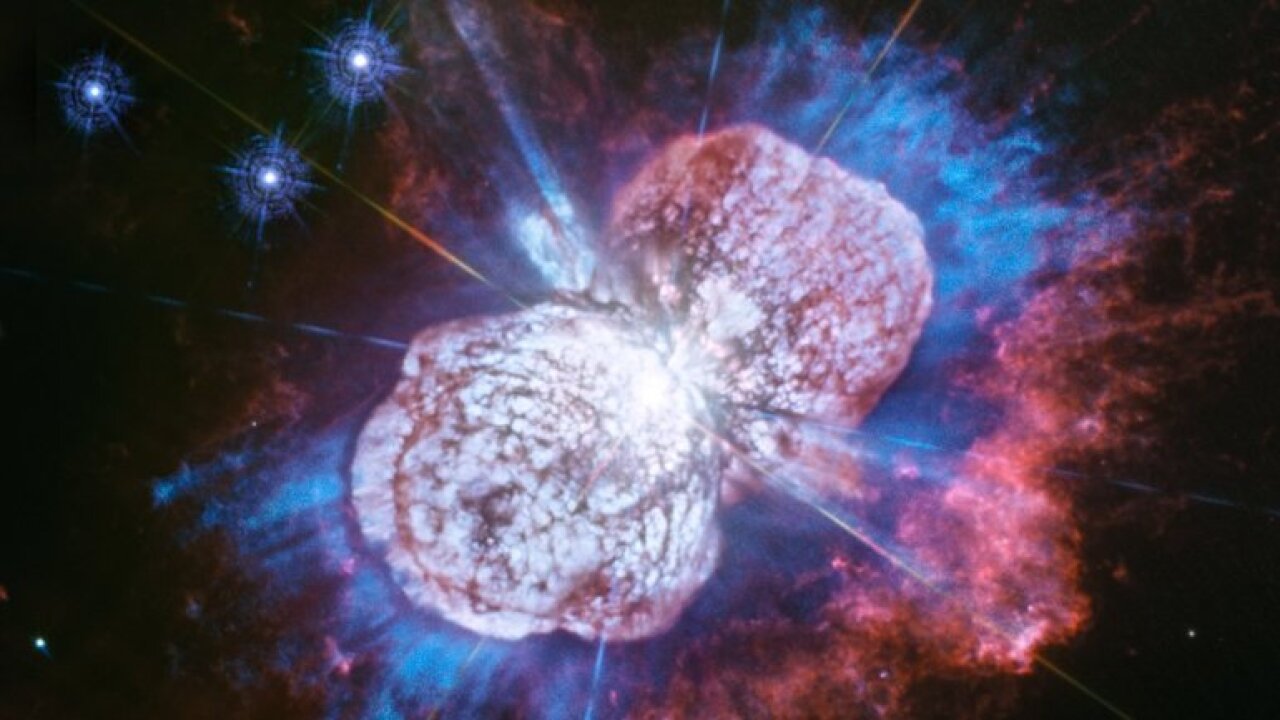 Image captured by the Hubble telescope of fireworks in space

Just in time for the July 4 holiday the Hubble Space Telescope captured an image of cosmic fireworks that have been unfolding for two centuries.

The source of the show is 7,500 light-years from Earth in the double star system Eta Carinae, which is in the Carina or Ship’s Keel constellation. The Great Eruption, a gigantic explosion, happened in the system in 1838.

Explosions in space leave signatures behind. In this case, a giant shape formed by gas and dust reminiscent of fireworks remains around the stars.

This explosion caused Eta Carinae to be the second-brightest star in the sky during April 1844. At the time, it could even be used for ships navigating the southern seas.

Although the star faded, the display endures all these years later, and Hubble has imaged the star in many ways over decades.

The latest image captures the nebula in ultraviolet light which appears in blue. The red seen in the image is glowing nitrogen.

Image captured by the Hubble telescope of fireworks in space

“We’ve discovered a large amount of warm gas that was ejected in the Great Eruption but hasn’t yet collided with the other material surrounding Eta Carinae,” Nathan Smith, lead investigator for Hubble at the University of Arizona’s Steward Observatory, said in a statement. “Most of the emission is located where we expected to find an empty cavity. This extra material is fast, and it ‘ups the ante’ in terms of the total energy of an already powerful stellar blast.”

The streaks of light in the image appear much like sunbeams filtering through clouds or dust on Earth. Here, the star’s light is going through dust and casting a shadow.

The ultraviolet image reveals a new look at the star system, revealing the magnesium gas in a way that could be used to study other stars or nebulae.

As for Eta Carinae, the final show will happen when the system explodes into a supernova that eclipses the Great Eruption. Astronomers don’t know if this has already happened because the brilliant burst of starlight produced by the event won’t reach us for 7,500 years.