VIRGINIA BEACH, Va. — The Coast Guard has suspended its search Wednesday for a teacher who went missing trying to save his student in Virginia Beach waters on Tuesday.

This is the latest information as crews are scaling back the search for Reuven Bauman, who never returned after entering the ocean around 12:30 p.m., in the 4000 block of Sandpiper Road.

"This is a terrible loss. Rabbi Bauman was the most respected rabbi's and teachers in this community," Rubin stated.  "He was a father, a scholar and an outgoing, smart man."

According to the website for the Jewish religious school Toras Chaim in Portsmouth, Bauman taught seventh and eighth grade boys, plus third grade Judaic Studies.

The 35-year-old father of five went into the waters to save a 13-year-old student who got caught in a rip current in the Back Bay National Wildlife Refuge Tuesday. The teen was taken to a hospital and is in stable condition.

The Coast Guard says that where the two went in the water is somewhere that is off-limits to swimming, surfing and boating.

"All we know is he was chaperoning with another rabbi for a field trip; they went out to enjoy nature," said Rubin. "There was another man - a bystander that helped, too - we don't know who he is, but he is an angel."

"It was rough out there on the coast yesterday, and that's where the swimmer went into the water. If the swimmer was on the surface of the water, our assets would have been able to find him," said Capt. Kevin Carroll of the U.S. Coast Guard. "We always try to respond as if our own family was in distress." 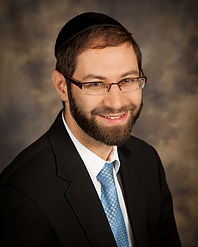 There are no lifeguards in the area, and red flags were flying. Swimming is prohibited in that area, so it's unclear why anyone was in the water.

"Water is pulling in two different directions. The inshore current's going north, the outer current's going south, so it's kind of making it difficult for search patterns, as well as the water is in rough conditions. There are red flags in the Sandbridge area, and this happened on a beach were swimming is prohibited," said Cat Watson with Virginia Beach EMS.

Norfolk Rabbi Alexander Haber spoke with News 3 reporter Chelsea Donovan earlier Tuesday afternoon, saying he saw a bunch of kids swimming in the National Wildlife Refuge near Little Island Park when a male went in after one of the children who was struggling.

Haber said he is aware there was no swimming in the water but would not elaborate as to why the children were in there. He is asking the public for prayers at this hour.

While the Coast Guard has called off its search, Capt. Carroll expressed how much this man did for the 13-year-old and the significance it brings of being a hero.

"This man went into the water because there was a distressed teenager and he was going out to save him and the young man was saved, and unfortunately he was not. His efforts were truly heroic."

"Everyone is praying for the recovery of his body. It's very important they recover it so they can have a proper Jewish burial. His soul is wrapped up in this - in his being," said Rubin.

The Coast Guard added that Bauman's family is still conducting a search of their own. They have come down from New York and New Jersey to look for him in the water of the Sandbridge area of Virginia Beach.