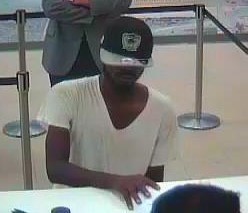 NORFOLK, Va. – Norfolk Police say a man robbed a bank Friday afternoon, and they’re asking for the public’s help to find him.

Around 4:30 p.m., police say the man entered the Wells Fargo at 440 Monticello Avenue and demanded money from the clerk, who complied with his demands.

The man fled the bank before police arrived. No injuries were reported.

The robber is described as a black man who is between 25-35 years old, is approximately 5’9″ to 6′ tall and has long facial hair from his chin. He was last seen wearing a white V-neck t-shirt, dark-colored jeans and black and white sneakers.

Detectives are asking anyone who recognizes the man from the above surveillance photos or who may know anything about this crime to call the Norfolk Crime Line at 1-888-LOCK-U-UP (1-888-562-5887).