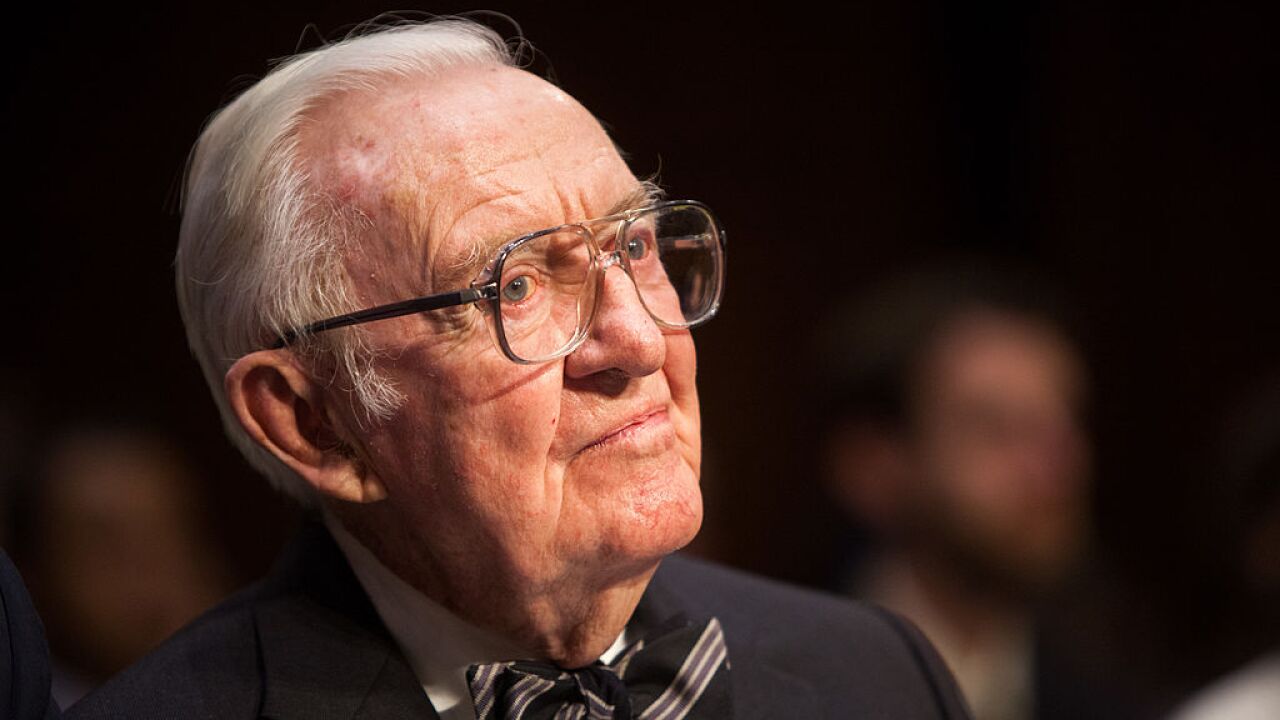 Justice John Paul Stevens, who was nominated to the Supreme Court by Republican President Gerald Ford in 1975 in the wake of Watergate and stepped down almost 35 years later as a leader for the liberal side of the bench, has died. He was 99.

Stevens, known as a soft spoken midwesterner with a searing intellect, died on Tuesday, according to a statement from the Supreme Court.

Stevens was born in the South Side of Chicago in 1920 and graduated from the University of Chicago in 1941, and Northwestern Law School in 1947. In interviews, he shied away from questions concerning his legacy and always maintained that his ideology hadn’t shifted during his years on the court.

On the bench, always with his trademark bow tie peaking over his judicial robes, Stevens would often wait until the latter half of an argument, lean forward with a polite, “May I ask” and then launch a razor sharp question cutting to the core of an advocate’s case.

He retired in 2010 at 90 years old, clearing the way for President Barack Obama to nominate Justice Elena Kagan, then 50, to take his place.

“Thanks to Elena,” he said in a speech in 2015 at the University of Miami Law Review Symposium, “I have never regretted my decision to retire.”

Stevens, a craftsman for language, wrote powerful dissents when his views did not carry the day.

In Citizens United v. FEC, a campaign finance case in which the majority held that the government could not ban political spending by corporations in candidate elections, Stevens did not mince his words. He accused the majority of rejecting the “common sense of the American people.” After his retirement, he said the case should be overruled. “No doubt about it,” he told an audience in 2015.

He also penned a dissent in Bush v. Gore, the controversial 2000 decision that halted a recount of Florida ballots and cleared the way for George W. Bush to take the presidency.

“Although we may never know with complete certainty the identity of the winner of this year’s Presidential election,” Stevens wrote, “the identity of the loser is perfectly clear. It is the Nation’s confidence in the judge as an impartial guardian of the rule of law.”

In a case concerning detainees at Guantanamo Bay in 2004, Stevens wrote the majority opinion holding that detainees could challenge their detainment in federal court.

Over his career, he voted to reaffirm the core holding of the landmark Roe v. Wade decision to legalize abortion nationwide in 1973; voted in favor of an admissions policy at the University of Michigan Law School that took race into consideration; and he assigned an early gay rights opinion to Justice Anthony Kennedy, who, in turn, relied upon an earlier opinion by Stevens.

He served as a naval intelligence officer in World War II, and wrote a strong dissent in a 1989 decision that upheld a protestor’s right to burn the American flag.

Although he voted to uphold the death penalty in 1976, near the end of his tenure in 2008 he said he had come to believe that the death penalty represented “the pointless and needless extinction of life with only marginal contributions to any discernible social or public purpose.”

Because of his seniority, by 1994, Stevens had the authority to assign opinions when the chief justice was voting on the other side. Stevens, who also happened to be an accomplished bridge player, was a master tactician. He used his assigning authority strategically, sometimes taking on the big decisions himself, other times assigning them to a justice who might be wavering to bolster his or her vote.

No slacker in retirement, Stevens wrote books and essays while also appearing often in public for talks and speeches.

In March 2017, after a massive school shooting in Parkland, Florida, Stevens took the step of calling for the repeal of the Second Amendment.

In an op-ed for the New York Times he noted that he had been in dissent in a 2008 landmark opinion holding for the first time that an individual has a right to bear arms in the home and said the best way to overturn that decision was to repeal the Second Amendment.

“Overturning that decision via a constitutional amendment to get rid of the Second Amendment would be simple and would do more to weaken the N.R.A.’s ability to stymie legislative debate and block constructive gun control legislation than any other available option,” Stevens wrote.

In a 2007 interview with scholar Jeffrey Rosen for the New York Times magazine, Stevens said that he considered himself a judicial conservative “who submerges his or her own views of sound policy to respect those decisions by the people who have authority to make them.”

This story is breaking and being updated.