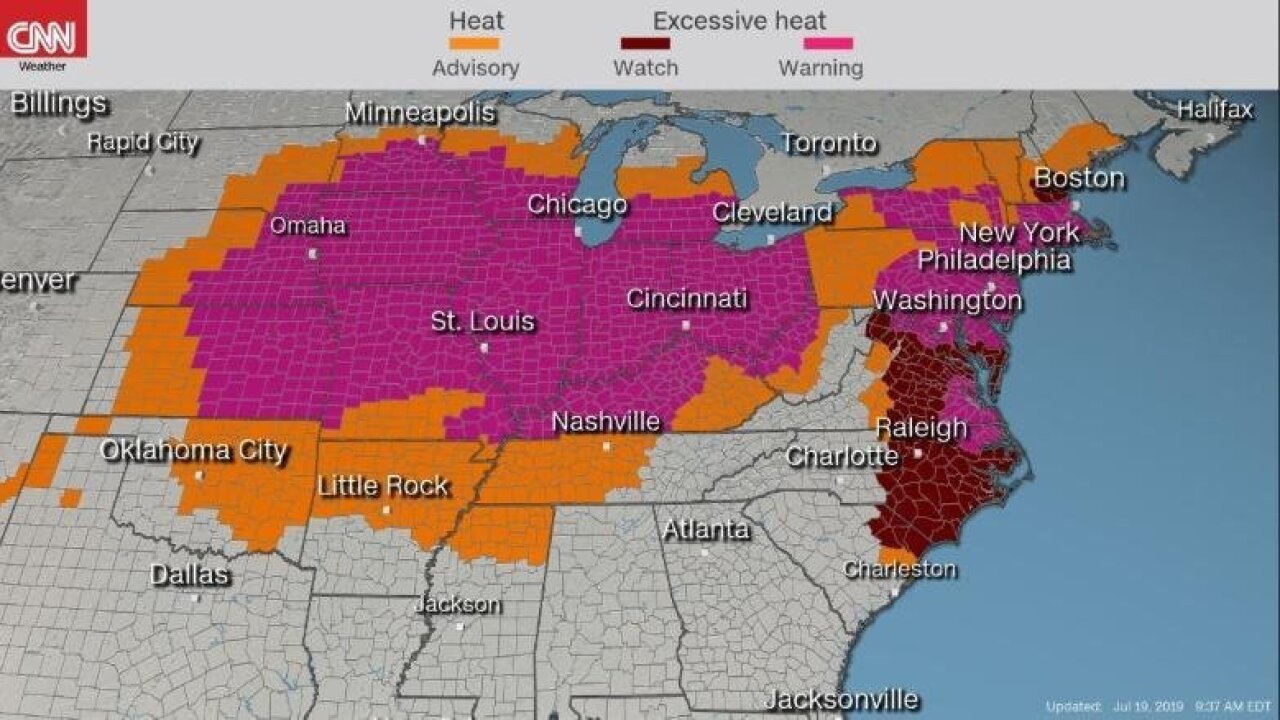 Peak temperatures from a potentially deadly heat wave are expected to begin Friday, and major US cities are taking special measures to prepare — with New York City declaring an emergency.

That’s what the National Weather Service is warning as a dangerous heat wave reaches its peak this weekend and more than two-thirds of the US are feeling temperatures push into the triple digits.

So far, one death has been attributed to the high temperatures. Former NFL player Mitch Petrus, 32, fell ill while working outside Thursday during a heat advisory in Arkansas. He died of heat stroke, officials said.

Cities in Virginia and North Carolina saw some of the hottest air of the season. New York, meanwhile, has opened almost 500 cooling centers. And officials in Massachusetts are urging residents to wear loose clothing and be alert for signs of a heat stroke.

About 157 million people are under heat warnings and heat advisories Saturday as daytime temperatures will climb into the mid to upper 90s — and feel like 110 degrees — from the Great Plains to the East Coast.

And it won’t get any better at night time. Overnight temperatures over the weekend won’t drop below 80 degrees in many cities across the East Coast, the National Weather Service’s Weather Prediction Center said.

Across the upper East Coast on Saturday, the weather service said, the most dangerous time will be mid-afternoon into early evening hours, when temperatures and humidity will peak.

“Take extra precautions if you work or spend time outside,” the service said. “When possible, reschedule strenuous activities to the early morning the late evening.”

In Philadelphia and New Jersey, the weather service warned the heat may cause heat stress or heat stroke. The elderly and people with pre-existing conditions are most at risk.

In Detroit, where residents will see a heat index of up to 105 degrees Saturday, more than 200,000 people did not have power in the early morning hours after thunderstorms caused trees and branches to take down power lines.

By Saturday afternoon, power had been restored to all but about 70,000, officials said.

But relief is coming. A cold front will drop into the central US and portions of the Midwest late Saturday, which will bring cool air in the Midwest Sunday, CNN meteorologist Ivan Cabrera said. The East Coast will begin cooling down Monday, Cabrera said.

Until then, city officials are taking precautions against the sweltering heat and preparing for what could be a deadly weekend.

Heat wave in the Big Apple

In New York — which has declared an emergency — many events have been canceled or postponed after concerns of participants’ health.

Saturday’s card of horse racing at New York’s Saratoga Race Course was canceled. So were all races Saturday and Sunday at the Maryland Jockey Club in Laurel.

“The health and safety of our horses and jockeys is our highest priority,” Maryland Jockey Club President and General Manager Sal Sinatra said.

“After exhausting all options to mitigate athlete, volunteer, spectator and staff exposure alike, we are unable to provide either a safe event experience or an alternate race weekend,” organizers said.

In an executive order that lasts until Sunday night, New York Mayor Bill de Blasio ordered office buildings 100 feet or taller to raise thermostats to 78 degrees and encouraged residents to set their thermostats higher to reduce energy use.

The city is opening about 500 air-conditioned “cooling centers” in public facilities. Public pools were to be open an extra hour (until 8 p.m.) from Friday through Sunday, And the city will set up portable drinking fountains at busy pedestrian areas through Sunday.

The Brooklyn Defender Services called on the mayor and the Department of Corrections Commissioner Cynthia Brann to protect inmates from the heat.

“Most incarcerated people are without air conditioning and the limited number of fans are only in the day rooms, leaving people to swelter, particularly while in their cells,” the organization said. “DOC is not providing appropriate summer clothes to many of our clients. People with medical needs have reported feeling nauseous and dizzy.”

In many locations across the country, city officials and emergency departments are warning against the danger that pets will face.

“A closed car can rise to 125 degrees in just 8 minutes,” the Massachusetts Department of Public Health wrote on Twitter.

Animals, according to the weather service, can die of heat stroke within 15 minutes. Cracking car windows won’t help. Keep your pets at home during hot weather, the service said, and if you see an animal inside a car, don’t leave without solving the problem.

The American Society for the Prevention of Cruelty to Animals recommends lots of fresh, clean water.

“Know the symptoms of overheating in pets, which include excessive panting or difficulty breathing, increased heart and respiratory rate, drooling, mild weakness, stupor or even collapse,” the organization said.

How climate change has played a role

And the threat of heat waves will get more serious across the globe and more widespread as the climate crisis continues, says Francesco Rocca, president of the International Federation of Red Cross and Red Crescent Societies.

A new report by the Red Cross Red Crescent Climate Centre says 17 of the 18 warmest years on record have occurred since 2001.

“Climate projections indicate that if greenhouse gas emissions continue on their current pathway, by the year 2100 three out of four people on Earth could be subject to at least 20 days per year of potentially deadly heat and humidity levels,” the report says.

And in the US, the number of days each year with a heat index of more than 100 degrees will more than double by mid-century, a report by the Union of Concerned Scientists says.