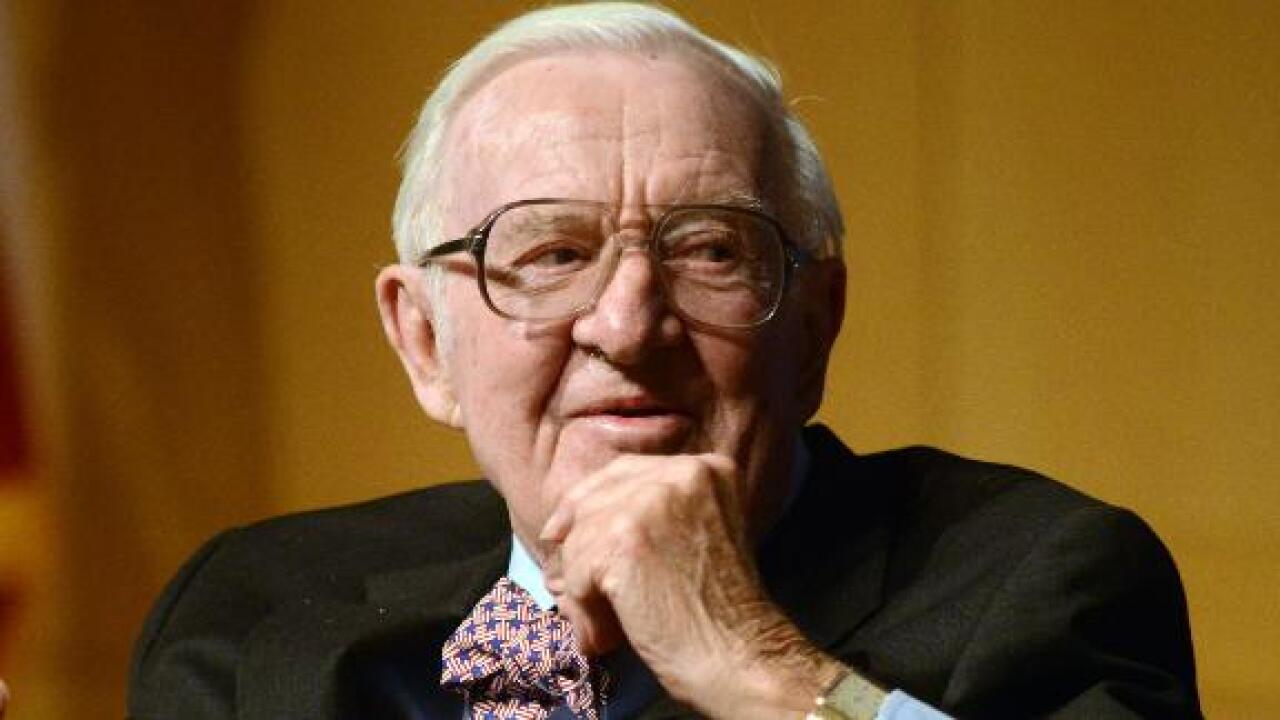 PHILADELPHIA, PA – APRIL 28: Justice John Paul Stevens, retired Supreme Court Justice answers a question posed by Brooke Gladstone (not shown), Host and Managing Editor of WNYC???s ???On the Media??? at the National Constitution Center April 28 2014 in Philadelphia, Pennsylvania. Stevens discussed his new book, Six Amendments: How and Why We Should Change the Constitution. (Photo by William Thomas Cain/Getty Images)

Justice Ruth Bader Ginsburg revealed Tuesday she traveled with retired Justice John Paul Stevens “in the last week of his life” to Lisbon, Portugal, for a conference where the two justices attended meetings and visited museums, vineyards and castles.

“Perhaps he knew at age 99, distant travel was a risk,” Ginsburg said during Stevens’ funeral at Arlington National Cemetery, “but he wanted to experience fully the joys of being alive, and he did just that almost to the end.”

Ginsburg, 86, said as the “next eldest in attendance” she had the opportunity to ride with him on long drives and his mind “remained vibrant” and he spoke not only of court cases but footnotes in various opinions.

“His conversation was engaging, his memory amazing,” she said. As they were leaving the US ambassador’s residence during their last evening in Lisbon, Ginsburg told Stevens, “My dream is to remain on the court as long as you did.”

His immediate response, she said, was “Stay longer!”

Justice Sonia Sotomayor also accompanied her colleagues on the trip which was hosted by New York University. The event was from July 8-12.

Stevens died in Florida on the evening of July 16, according to a press release from the court, after suffering a stroke July 15. The release did not say where Stevens was when he fell ill.

Ginsburg talked about his approach to the law and his willingness to continue “learning on the job.” She also mentioned that on the 30th anniversary of his appointment to the court, President Gerald Ford wrote a letter praising his nominee.

A day after laying in repose at the Supreme Court, Stevens — a World War II veteran — was buried in a private ceremony. According to a court spokeswoman, there was a Navy casket team, a firing team and a bugler.

Stevens served in the United States Navy from 1942 to 1945 and was awarded the Bronze Star for his service on a codebreaking team.

The private service — closed to the press — was also attended by Stevens’ former clerks. On Monday, 70 of them lined the stairs of the Supreme Court as the casket was carried to the Great Hall for a day of mourning. The clerks took turns standing vigil as visitors, including President Donald Trump, paid their respects.

At Tuesday’s private funeral, David Barron, who served as a clerk during the 1995-96 term and is now a judge on the 1st US Circuit Court of Appeals, called his former boss was “unassuming” but “supremely competent.”

“He believed fiercely in independence, in not going along with the crowd, in stating your own views no matter how distinctive, and in the capacity of the country to handle disagreement, even strong disagreement, and to learn from it, if respectfully offered and respectfully received,” Barron said.

Another eulogy was delivered by Stevens’ granddaughter, Hannah Mullen, who said that he was the “great Justice, the great man” but that he was also “the greatest grandpa in the world.”

“He was the kind of grandpa who taught us how to catch lightning bugs,” she said, and he used his anti-trust skills to try to “trounce” his grandson John in Monopoly.

She spoke about his career, his big dissents and the opinions he wrote that no other justice joined.