Horses, other animals seized from Pasquotank Co. home due to filthy conditions, neglect

On July 18, animal control officers and rescue groups canvassed a property on Tadmore Lane after a welfare check. What they found was disturbing.

"Horses were standing in their own pee and poop, kittens were in cages, there were dead kittens, they had maggots all over their makeshift bedding," stated Amber Doughty with Right Way Rescue.

Doughty's rescue group is currently caring for five horses, three mini horses and a pony that were seized from the property.

"The house didn't have air conditioning. It was really hot; you could smell it from the driveway," she stated.

Doughty said the horses were malnourished and neglected. Their teeth were so long they had turned to hooks, so they couldn't chew or digest food. She said their hooves were jagged from lack of trimming.

"This homeowner didn't mean to do it on purpose; she was just in over her head," she explained.

The sheriff's office said animals were living all over the property - some inside, some outside and some in a barn. All of the animals were in poor health besides the dogs.

While the horses are now at Right of Way Rescue being rehabilitated, the dogs and cats are at the SPCA of Northeastern Carolina.

McKecuen said the homeowners had been collected the animals for more than a decade, and trying to care for them with the money they had. No charges have been filed. 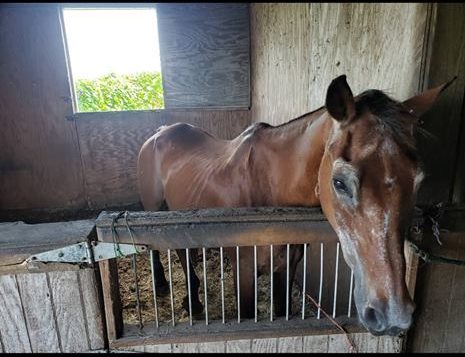