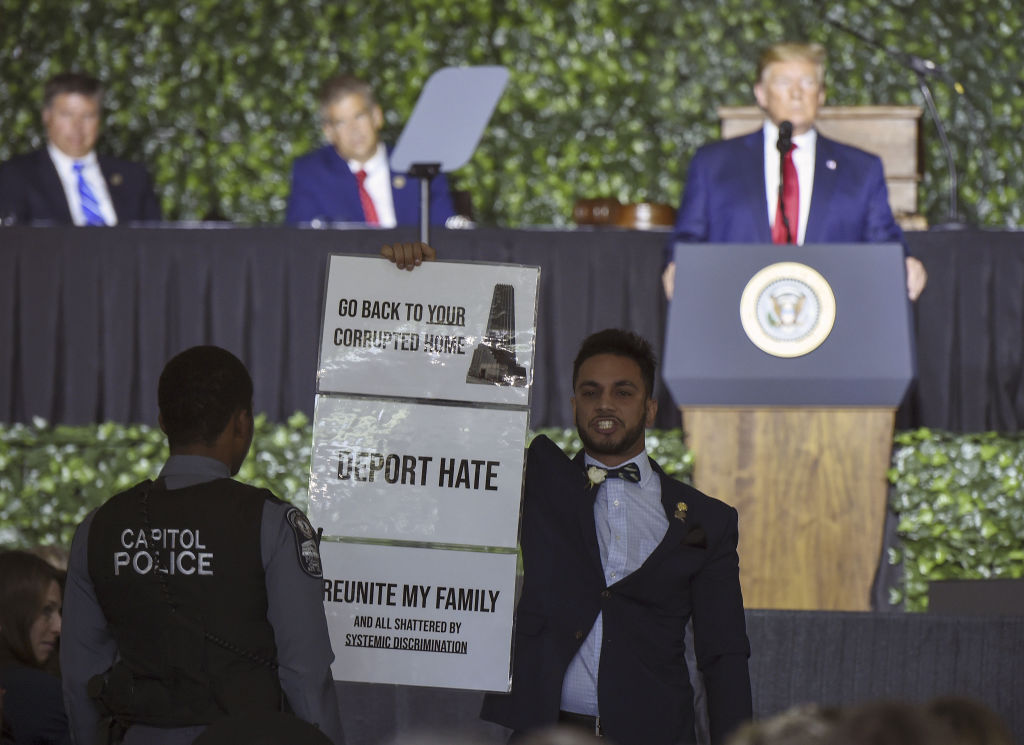 JAMESTOWN, Va. – A Virginia delegate interrupted President Trump as he delivered remarks in Jamestown on Tuesday, telling Trump “you can’t send us back” in a response to Trump’s racist attacks on a group of Democratic congresswomen.

The protest came as Trump delivered remarks commemorating the 400th anniversary of the Jamestown colonial settlement. A group of black Virginia state lawmakers decided to boycott the speech amid Trump’s continuing attacks.

Trump has stoked racial divisions in recent weeks, first by telling four congresswomen of color they should “go back” to their native countries — even though three were born in the US — and more recently by attacking Democratic Rep. Elijah Cummings, the black lawmaker who represents parts of Baltimore.

“Mr. President, you can’t send us back. Virginia is our home,” said Delegate Ibraheem Samirah said before he was drowned out by boos and escorted out by police. Trump paused and then continued with his prepared remarks after Samirah was led out.

Samirah, a Democrat of Northern Virginia, says that he disrupted the president’s speech because “nobody’s racism and bigotry should be excused for the sake of being polite.”

Samirah is an American dentist and politician from Virginia. He was elected to the Virginia House of Delegates for the 86th district in 2019.

I just disrupted the @realDonaldTrump speech in Jamestown because nobody's racism and bigotry should be excused for the sake of being polite. The man is unfit for office and unfit to partake in a celebration of democracy, representation, and our nation's history of immigrants. pic.twitter.com/0okD7eRVer

The protest came moments after Trump turned from focusing on the history of the Jamestown settlement — the first permanent English settlement in North America — to acknowledge the stain of slavery and racial discrimination on early US history.

“In August 1619, the first enslaved Africans in the English colonies arrived in Virginia,” Trump said. “It was the beginning of a barbaric trade in human lives. Today, in honor, we remember every sacred soul who suffered the horrors of slavery and the anguish of bondage.”

He also acknowledged it would take the Civil War and another century after that for the country to “extend the blessings of freedom to all Americans.”

But the remarks are unlikely to signal Trump is backtracking from his stoking of racial tensions. Before leaving the White House on Tuesday for the Jamestown event, Trump repeated his attacks on Cummings and his sweeping characterization of West Baltimore as a “disgusting, rat and rodent infested mess” where “no human being would want to live.”

Trump on Tuesday said he did not regret the remarks and called Baltimore “an example of what corrupt government leads to.”

Trump has made clear he believes his attacks on Cummings are politically shrewd, rejecting the possibility that he could be alienating moderate voters with his attacks and insisting he is “helping myself” by pointing out “the tremendous corruption” for which he has provided no evidence.

Some White House aides, meanwhile, have privately expressed discomfort at the Cummings broadside and concerns that they are misguided given that Cummings is a far less savory target than the four progressive Democratic congresswomen Trump previously attacked.

Samirah told CNN he decided to protest due to Trump's attacks on those Democratic congresswomen -- Reps. Alexandria Ocasio-Cortez, Rashida Tlaib, Ayanna Pressley and Ilhan Omar -- and his own black and Palestinian heritage.

He said he chose to make his protest following Trump's remarks on slavery.

"Hearing him say -- somebody who's instituting systemic discrimination against the very black people that he's referencing -- my temperature went up," he said. "I had to get up and make sure it was very clear that he does not stand for me, he does not stand for Virginians. This is my home and I'm here to stay."

"I think everybody planned to protest in advance, a lot of people came, planned to sit down, to not clap for the President when he's speaking. There are people who walked out," he said.

A press release sent out by Delegate Samirah's staff read as follows:

Today, Delegate Ibraheem S. Samirah disrupted the Jamestown event because he refused to sit idly by while President Donald Trump, a beacon of hate speech and harmful policy, hijacks a celebration of democratic values he doesn't even hold. This President has made his true values loud and clear by telling black and brown American citizens to "go back where they came from", by constantly referring to the places that black and brown people live as "rat-infested" "sh.tholes", by inciting violence against Muslims, and by demonizing immigrants and comparing them to vermin.

"400 years ago today, a group of undocumented immigrants formed a government to rule this Commonwealth, beginning a centuries long tradition of people from across the world immigrating here for a chance at safety, democracy, and prosperity; my parents, who are Palestinian refuge, included. The fact that the racist-in-chief, who so openly stokes hate against immigrants, was even invited to this event is insulting to Virginians and insulting to the history of our Commonwealth's democracy." said Delegate Samirah.

"We have to remember that his rhetoric translates directly into policy. He cages kids. He separates families. He bans Muslims. He deprives people the human right of seeking asylum. And it doesn't end at the border. He is cutting food stamps, taking away healthcare and environmental protections, giving billions of dollars in handouts to the obnoxiously wealthy, and enabling a systematically-racist criminal justice system."

"Virginians of all backgrounds can see right through Trump and the Republican General Assembly that embraces him warmly. They say that it's disrespectful - that it's impolite - to disrupt this celebration. But we saw the GOP's deep disrespect for the people of Virginia when they only entertained 90 minutes of work in our special session on gun violence prevention, choosing gun lobbyists over Virginian lives. In the same way they politicize the issue of gun violence, Republican's politicization of the 400th anniversary of our Commonwealth is completely unacceptable."

"Today, historian John Meacham said to the crowd 'the story of America is in fact the story of progress.' I don't see how anyone can claim to participate in that progress while embracing a man who wants to bring us as far back in time as possible. I will always fight proudly against those who espouse racism and dehumanization. And I am confident that my constituents - my friends and neighbors in Herndon and across Virginia - would rather see me stand up and be heard than sit down, be polite, and passively accept the presence of a man who has sowed fear, division, and hate from the highest office in the land."