NEWPORT NEWS, Va. - Two people were killed in a shooting at a restaurant in the 5000 block of Jefferson Avenue Thursday afternoon.

According to police, the shooting happened at Dunn's River Jamaican & Caribbean Restaurant.

A suspect was found and detained Thursday afternoon about a block from the shooting after police were able to reportedly match a description given to them by witnesses of the shooing. According to charges filed by Newport News Police, the suspect is 37-year-old Darrell Chaney.

The charges against Chaney include two counts of 1st degree murder, possession of firearm by a convicted felon, two counts of use of a firearm in commission of a felony and discharging a firearm within a building.

“This arrest is a direct result of citizens immediately stepping up and providing information about this incident. Their involvement resulted in this individual being apprehended within minutes," said Newport News Police Chief Steve Drew. "I would like to thank the officers who worked long hours to investigate this case and the personnel from the Newport News Fire Marshal’s Office and Newport News Sheriff’s Office who assisted in the apprehension of Mr. Chaney." 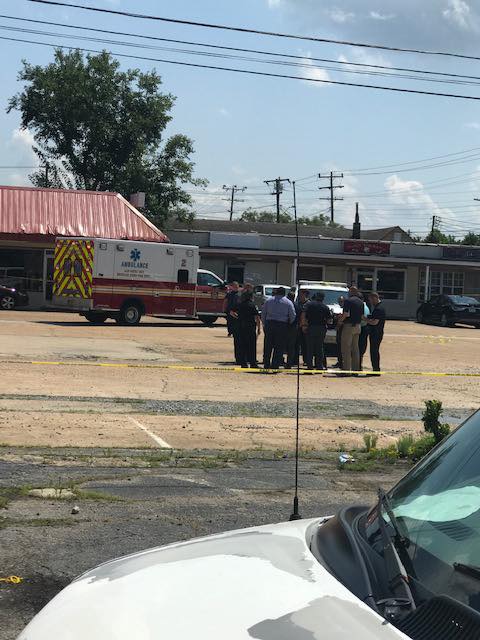 Shanecia Eley was inside the restaurant during the shooting and described the terrifying scene.

Another woman who didn't want to be identified said she was the only person unable to get out of the restaurant when the shots were fired. She said she crawled under a table and prayed to God.

She said she thought she was doing to die.

She said the gunman told her to come out from under the table several times. She said he told her she was with God.  She was terrified and thought he was going to shoot her. She said he left the store.

Eley ran outside and called police.

"I went to the nearest place. I locked myself in, and he was on foot. He walked out like he did nothing wrong; walked down the street with his backpack on like he did not just kill two people," Eley said.

Alfred Sanders said his brother was one of the two men killed.

"This is devastating to have to deal with this," said Sanders.

He said his brother was a father of four and a devoted Muslim who would minister every week to inmates.

Police say it didn’t take long for them to arrest a suspect because people in the area came forward with critical information about what they saw and heard.

"Citizens take ownership when they get involved, when they’re not afraid to speak out and say, 'This is what we saw, this is the individual, this is what he was wearing and this is his direction of travel,'" said Chief Drew.

Police were given a description of the suspect, who ran away from the area after the shooting. They were able to stop the man on the street.

Chief Drew said the community plays an important role in any investigation, and this one is a prime example.

"We got excellent, excellent information from citizens that were in the area and that lead to the individual being located and stopped within minutes of when this incident occurred."