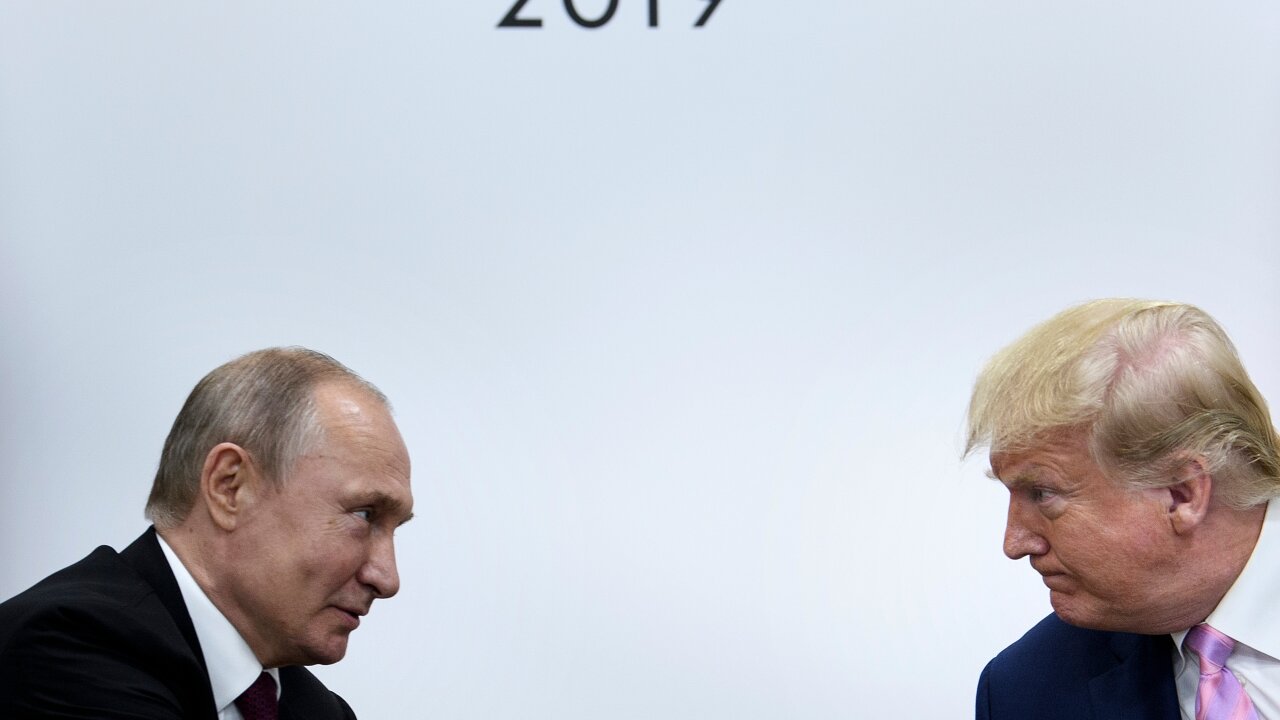 President Donald Trump is heavily considering a plan to block $250 million in military assistance to Ukraine, a move that would further ingratiate him to Russian President Vladimir Putin.

President Donald Trump is seriously considering a plan to block $250 million in military assistance to Ukraine, a move that would further ingratiate him with Russian President Vladimir Putin, and has directed senior officials to review the aid package.

President Donald Trump is heavily considering a plan to block $250 million in military assistance to Ukraine, a move that would further ingratiate him to Russian President Vladimir Putin.

Trump’s decision to order the review comes after the White House publicly lost a battle to slash foreign aid spending across the board. After scrapping the plan to slash $4 billion in foreign aid, Trump said his team would look to find cuts elsewhere in the aid budget.

“The President has made no secret when it comes to foreign assistance that US interests abroad should be prioritized and other foreign countries should also be paying their fair share,” a senior administration official told CNN.

The President has not yet made a final decision on whether to permanently block the funds, an administration official told CNN. The review process, however, has effectively paused disbursement of the funds, which are set to expire on September 30 if they are not used.

The Pentagon has already recommended to the White House that the hold on military assistance to Ukraine be lifted, an administration official and a US defense official told CNN Thursday.

A Pentagon spokesperson declined to comment on the matter on Thursday.

“We do not publicly comment on internal budget deliberations. For further inquiries, I direct you to the White House Office of Management and Budget,” said spokesperson Lt. Col. Carla Gleason.

However the hold on the aid remains in place, as it is the White House’s call whether to lift it, the administration official said, fueling uncertainty within the administration about what will happen to the spending after the review is formally completed.

In the meantime, agencies are authorized and encouraged to execute all processes to prepare for the obligation of those funds but must wait to obligate them until the policy review is complete and the President has made a final determination, the senior official said.

If Trump ultimately decides to block the aid package, a possibility first reported by Politico, it would likely prompt a bipartisan uproar from members of Congress who believe US military support is essential to countering Russia’s military involvement in Ukraine.

Illinois Republican Rep. Adam Kinzinger, a member of the House Foreign Affairs Committee, voiced his strong opposition to that idea in a tweet Thursday: “This is unacceptable. It was wrong when Obama failed to stand up to Putin in Ukraine, and it’s wrong now.”

Democratic Sen. Bob Menendez released a statement accusing the administration of circumventing Congress and “undermining a key policy priority that has broad and deep bipartisan support.”

“In willfully delaying these funds, the Trump Administration is once again trying to circumvent Congress’ Constitutional prerogative of appropriating funds for U.S. government agencies. It is also undermining a key policy priority that has broad and deep bipartisan support,” he said.

What will Trump do?

Multiple sources familiar with the issue tell CNN that the President has floated the idea of halting the funding program for weeks. The White House has recently notified relevant agencies and congressional committees of its intent to block the aid to Ukraine, one source said.

However, sources say that there are still questions about what Trump will ultimately do.

The push to block the aid package has been supported by Trump’s acting chief of staff Mick Mulvaney but opposed by some within the State Department and national security council, according to another source. National security adviser John Bolton was in Kiev Wednesday, where he met with Ukrainian officials, but there is little indication he raised the possibility of blocking the funding.

“It was great to meet with my Ukrainian national security and defense colleagues in Kyiv. The discussions clearly show that we share a common commitment to preserving Ukraine’s security and sovereignty, and to ensuring it is not subject to Chinese economic exploitation,” Bolton tweeted Wednesday.

A US Department of State official told CNN on Thursday that the policy on Ukraine has not changed, adding the US remains committed to a robust partnership between the two countries.

But Trump’s public deference to Putin and Russia has alarmed US allies and lawmakers. The issue has only been amplified by Trump’s recent comments at the G7 summit, in which he seemingly downplayed Russia’s military incursion in Ukraine and suggested that Russia be reinstated into the group of leading global economies.

The US has provided Ukraine with more than $1 billion in security assistance since 2014 as it has sought to bolster the country’s military, which is facing an ongoing conflict with separatists in the country’s east, forces the Pentagon believes are backed, armed and even led by Moscow.

In 2017, the Trump administration announced its decision to provide lethal anti-tank weapons, including US-made Javelin missiles, to Ukraine.

“Since 2014, there has been broad bipartisan support in the Senate for security assistance to Ukraine. If Trump’s OMB is really playing games with Ukrainian security assistance, then the response from Congress will be fierce. At the very least, Trump’s OMB should get out of the way and release the funds that Congress has already appropriated,” a senior Democratic aide told CNN.

Rep. Adam Schiff, the Democratic chairman of the House Intelligence Committee, tweeted Wednesday that such a move would be “destructive to our national security” and suggested that the decision is politically motivated.

“Trump is withholding vital military aid to Ukraine, while his personal lawyer seeks help from the Ukraine government to investigate his political opponent. It doesn’t take a stable genius to see the magnitude of this conflict. Or how destructive it is to our national security,” Schiff wrote.

Rudy Giuliani, who serves as Trump’s personal attorney, has long lobbied Ukraine to investigate former Vice President Joe Biden’s call in 2016 to remove the country’s top prosecutor, who at one point had been investigating a Ukrainian natural gas company connected to Biden’s son, Hunter.

Last week, Giuliani said he had again raised the issue with a Ukrainian official, suggesting the former New York mayor is making a renewed push for the country to investigate Trump’s political enemies.

Other Western governments also called for that prosecutor’s dismissal, and no evidence has indicated Biden’s move was inappropriate.

Ukraine’s prosecutor general told Bloomberg in May he had no proof of wrongdoing by Biden or his son.

The Biden campaign refused comment on Giuliani’s talks. The New York Times first reported Giuliani’s talks with the official. Asked Thursday if he’s spoken to the President at all about the military assistance to Ukraine, Giuliani told CNN: “No, not in on it.”

Giuliani told CNN that the State Department informed him that Andriy Yermak, who he called the lawyer for Ukrainian President Volodymyr Zelensky, wanted to meet with him. Yermak was appointed as an aide to Zelensky in May, according to local media reports.

The two spoke twice over the phone, with Yermak offering to come to the US to meet with Giuliani before the two agreed to meet in Madrid last month, Giuliani said.

Giuliani claims that Yermak asked him questions and that he didn’t ask the Ukrainian lawyer to do anything because he “didn’t need to.” The focus of their conversation was on Biden’s possible role as then-vice president in the prosecutor’s dismissal and how Ukraine may have tried to damage Trump’s campaign, Giuliani said.

The State Department confirmed last week that it had assisted in connecting Yermak and Giuliani.