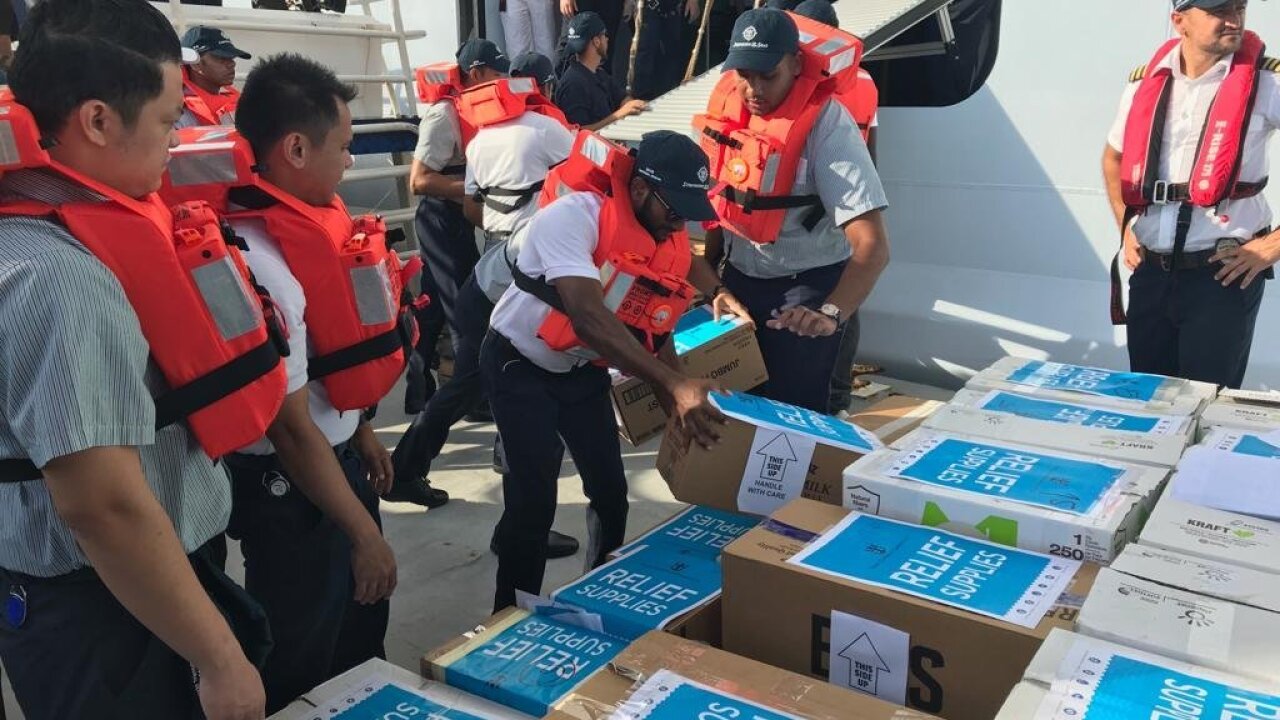 Supplies being readied for delivery from the Royal Caribbean cruise ship, Symphony of the Seas, to the devastated town of Freeport

Volunteers with search dogs continue to scour neighborhoods flattened by Hurricane Dorian, while global relief agencies are rushing to get food and shelter Saturday to some 70,000 people in the Bahamas left homeless on two northern islands.

The death toll, now at 43, is expected to rise drastically, officials said, as hundreds remain missing, buried under rubble on Grand Bahama and the Abaco Islands by the strongest hurricane ever to hit the archipelago nation.

“It was like an atomic bomb went off,” said Sherrie Roberts, who survived on the Abaco Islands when Dorian struck almost a week ago as a Category 5 monster, then lingered for days over the same wrecked places.

The situation has devolved into a “humanitarian crisis,” the Bahamian financial services ministry said Friday in a statement. Efforts are underway to move evacuees by the hundreds to safety, including on a cruise ship that arrived Saturday morning in Palm Beach, Florida.

Workers also brought equipment to count the dead and to understand the scope of damage, Jibrilu said.

The smell of death lingered in the air in Marsh Harbour, CNN’s Gary Tuchman reported Friday, as he toured hard-hit areas there.

Tuchman accompanied U.S. Coast Guard and city of Miami paramedics as they conducted a grim search through rubble in Marsh Harbour Saturday. The crews found the body of a woman buried in the layers of rubble that now blanket the neighborhood.

Local firefighters told Tuchman they expect many more bodies will be found in the area.

At least 70,000 people are homeless on Abaco and Grand Bahama, the United Nations estimated early Saturday. A thousand tarpaulins — strong pieces of waterproof plastic– will be provided to replace roofs that were stripped from homes, the International Organization for Migration said.

Pat Allard, 83, of Massachusetts said she went to the Bahamas before the storm to take care of her condo. She held back tears as she described the horrors of the hurricane.

“The roof caved in. The walls fell in. It was flooded. It was awful,” she said, recounting that she moved to four different units in her condo building for safety. “But I’m here. I made it.”

All the evacuees are properly documented to enter the US, according to Customs and Border Protection. Spokesman Michael Silva said all 1,437 are either US citizens, US residents or non-US Citizens with visas, or had other proper documentation to enter the country.

The cruise line said it filled the ship with food, water, personal hygiene products, medical equipment, generators, volunteers, and first responders, and headed to the island to provide first aid.

By Friday, the Coast Guard also had rescued more than 230 people off the islands. Survivors packed their few remaining belongings and searched for a way out.

At Marsh Harbour, hundreds of people have lined up to take a ferry back to Nassau. The Royal Bahamian Defense Force Commander there told CNN he had enough food and water at the port and on the ship for everyone.

People at the port had been waiting since the early morning hours, after hearing that there would be boats and they would be able to leave Saturday.

Many recounted horrific stories of surviving the storm by breaking through rooftops or swimming onto boats to try and ride out the storm.

Some reported that they had family members still missing, and that they witnessed friends and neighbors drown in the storm surge.

Ted Curry was one of more than 300 people waiting at the Leonard M. Thompson International Airport trying to get a flight to Nassau, the nation’s capital, to stay with family. Hundreds more had grown tired of waiting and made their way to the island’s main port.

“The island of Abaco has been through and survived many hurricanes in the past. It didn’t take long for us to rebound, but this is different from anything we’ve ever experienced. This hurricane will set us back for years to come,” he said.

On Friday, Bahamas Air announced they had resumed service to Marsh Harbour in Abaco and Freeport in Grand Bahama, offering several relief flights between those areas and Nassau, according to Bahamas public broadcaster ZNS.

The airline issued a schedule of the flights on its Facebook page.

In the neighborhoods of the wrecked islands, evidence of the disaster is everywhere.

“When we were driving up, we could smell … death,” CNN’s Patrick Oppmann said about Bevans Town on the island of Grand Bahama.

The area is in ruins, he said. “Every house, every structure, every life has been essentially destroyed in this area.”

Estimated death tolls have been “harrowing and deeply distressing,” said Jibrilu of the tourism and aviation ministry.

The public should prepare for “unimaginable information about the death toll and the human suffering,” Health Minister Duane Sands told Guardian Radio 96.9 FM.