Redskins lose season opener against Eagles after lackluster second half 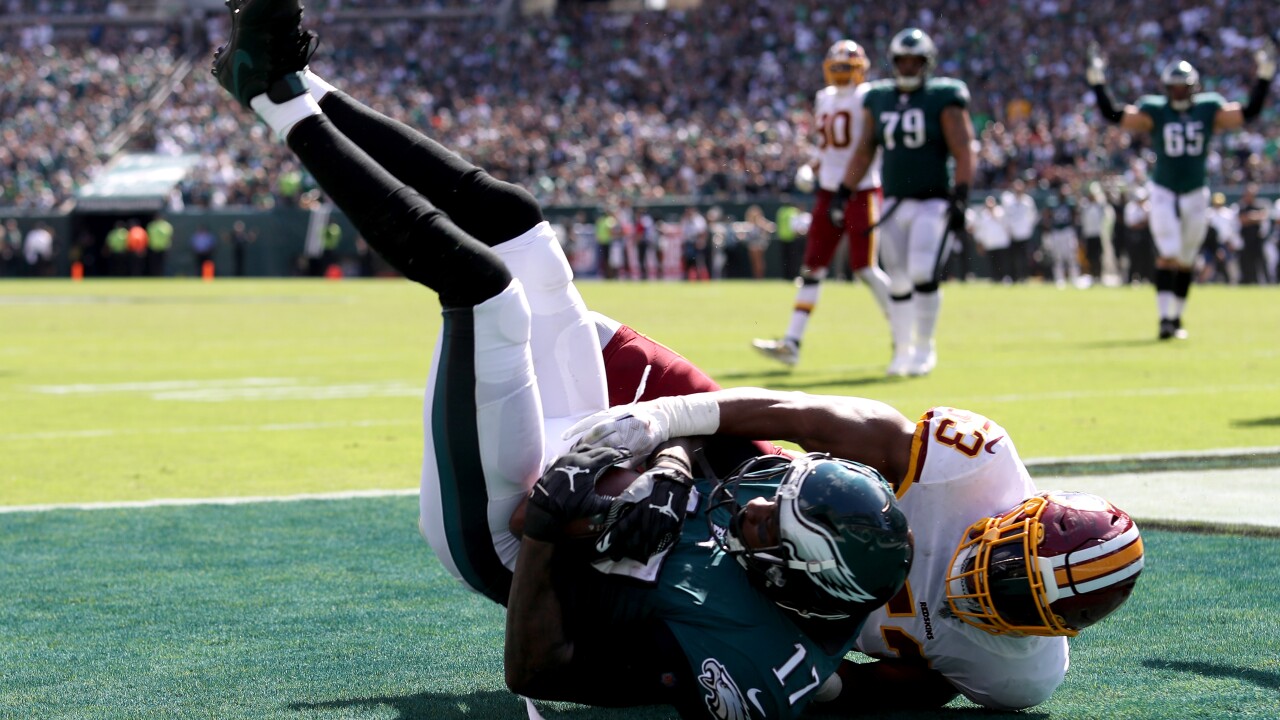 Vernon Davis #85 of the Washington Redskins jumps over Andrew Sendejo #42 and Ronald Darby #21 to score a touchdown. (Photo by Rob Carr/Getty Images)

PHILADELPHIA – The Washington Redskins were the biggest underdogs heading into the first NFL Sunday of the 2019 season, but they took control early in the season opener against the Philadelphia Eagles.

With 11 minutes remaining in the first quarter, quarterback Case Keenum completed a pass to Vernon Davis for a first down. It looked like Davis would be knocked out of bounds, but he hurdled a defender and took it 48 yards for a touchdown.

Davis is now 6th all-time on the NFL’s list for touchdown receptions by a tight end.

.@VernonDavis85 just HURDLED a guy on his way to the 48-yard TD! #WASvsPHI

After a 41-yard field goal by Dustin Hopkins, Washington took a 10-0 lead into the second quarter.

The Eagles wouldn’t head into the half scoreless after Carson Wentz completed a 51-yard pass to DeSean Jackson, before the Redskins added three more points at the end of the second quarter for a 20-7 lead at halftime.

Then, it turned into a completely different game in the second half.

Philadelphia’s offense got hot and Wentz completed passes to Jackson and Alshon Jeffery for two Eagles touchdowns in the third quarter. They didn’t let up, scoring again early in the fourth quarter with a 2-yard touchdown run by Jeffery.

The Eagles come back from a 13-point deficit with 25 points in the second half, winning it 32-27.

The Redskins (0-1) return to FedEx Field next Sunday for their home opener against the Dallas Cowboys (0-0), while the Eagles (1-0) travel to Atlanta to face the Falcons (0-1).

With the TD @VernonDavis85 is now 6th on the NFL’s all-time list for touchdown receptions by a Tight End. pic.twitter.com/fI1h5I1jrd

The #Redskins off to a great start in their season opener against the #Eagles, who Washington has lost four straight games to https://t.co/D4uhACt3Co

Adrian Peterson, the future Hall of Fame running back, takes the field in street clothes. He is healthy but INACTIVE for the #Redskins today after rushing for 1,000+ yards last season. #WASvsPHI #HTTR @WTKR3 https://t.co/bcg345ppnk pic.twitter.com/4q8nWxB3nm

Vernon Davis’ grandfather passed away yesterday. The veteran TE broke down in tears after his epic touchdown to begin the game.

After jumping out to 17-0 lead, #Redskins are up on the #Eagles 20-7 at the break. No #NFL team was a bigger week 1 underdog than the @Redskins.#WASvsPHI #HTTR #FlyEaglesFly @WTKR3 https://t.co/bcg345ppnk pic.twitter.com/Dum9Mq3S17