CHESAPEAKE, Va. – The Egg Bistro in Chesapeake is offering a $3,000 cash reward for help with finding the suspect who robbed their restaurant two weeks ago.

In a Facebook post, they said, “This event has changed someone that we love for the rest of her life and we will not rest until he has been apprehended.”

In surveillance pictures, a masked man could be seen pointing a gun at a manager and demanding money.

According to staff, the suspected robber entered a back door after closing hours around 4:45 p.m. on August 25. 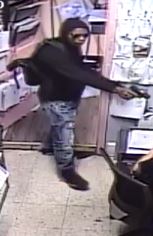 As a result of this happening, they explained extra security measures are in place to make sure staff and guest are in a safe environment.

“We will NOT allow this to happen again,” they stated in the post.

The suspect is roughly 5’8” tall, weighs roughly 175 pounds and has no facial hair or noticeable tattoos.

"We know by now he has talked about this to someone," the post mentioned.