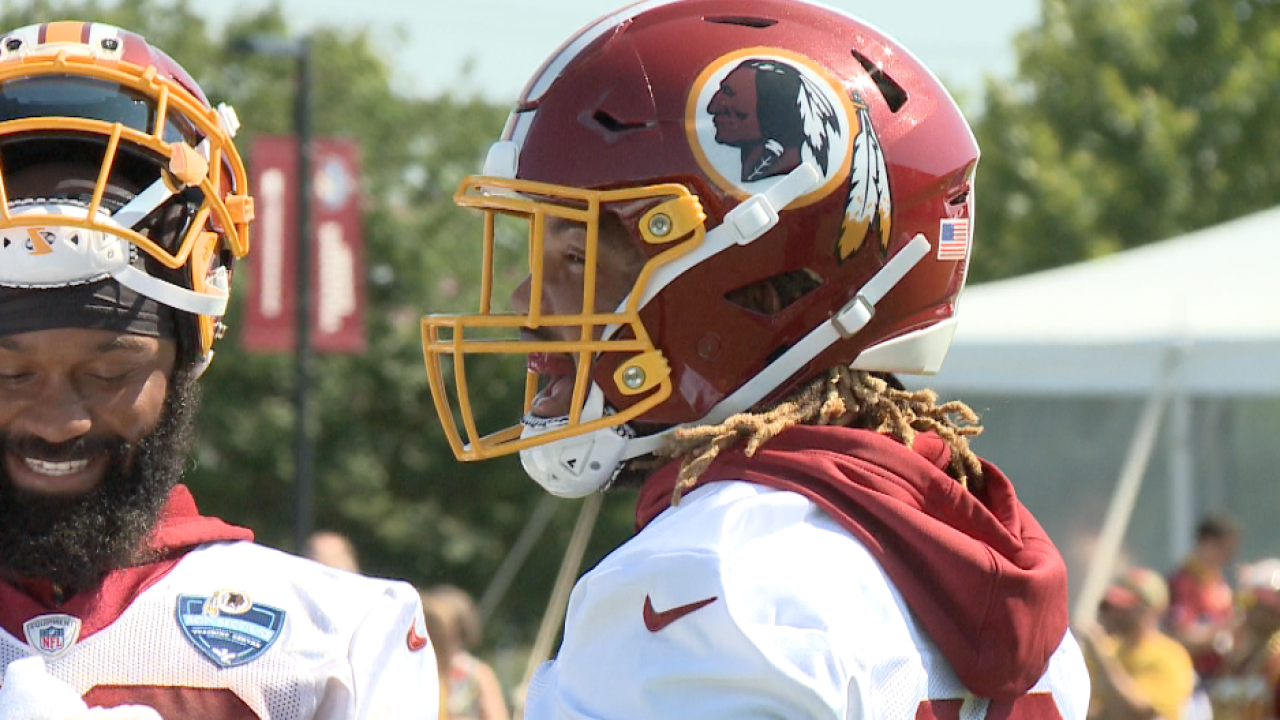 Running back Derrius Guice #29 of the Washington Redskins. (Photo by Todd Kirkland/Getty Images)

LOUDOUN COUNTY, Va. – When running back Derrius Guice felt knee soreness after Sunday’s game against the Eagles, he underwent an MRI and has been monitored by the Redskins’ medical staff since then.

That has led to Guice’s second knee surgery in two NFL seasons.

Today, Derrius Guice is in Pensacola, Florida to meet with Dr. James Andrews, the same doctor he went to for last year’s season-ending ACL injury. According to Redskins head coach Jay Gruden, Dr. Andrews performed a procedure to repair Guice’s right knee. He’s expected to be sidelined one to two months.

“He went to Dr. [James] Andrews, had a visit and they did a small procedure on him and that’s the extent of the procedure that I know of right now,” Gruden said. “He hasn’t [been] put on Injured Reserve, we haven’t made that determination yet.”

Dr. David Chao, a board certified orthopedic surgeon/sports medicine specialist who spent 17 years (1997-2013) as the head team physician for the San Diego Chargers, says Guice likely had a tear in his meniscus.

“When a report of meniscus injury came earlier this week, Guice hoped for a sprain”, Dr. Chao wrote in the San Diego Union-Tribune. “But menisci don’t get sprained. They tear. And because there is a poor blood supply to that area, they don’t heal and therefore need surgery to remove the torn portion. The reported estimates of 4-6 weeks and 6-8 weeks are similar. This timeframe indicates a likely lateral meniscus tear that will be trimmed (not repaired). This will also give Guice more time to get his left knee fully healthy.”

Guice has played in one career regular season game (Sunday’s loss at Philadelphia), and undergone two knee surgeries. He had a torn ACL in his left knee repaired last summer.

Gruden says he’s not concerned about last year’s second round draft pick. “I don’t have a concern with him getting back to full strength,” Gruden admitted Thursday. “He came back extremely strong with the much more damaged knee last time. This is a minor procedure from what I’ve been told and he will be back. Great kid, works extremely hard and eventually he’s going to show Redskin nation what he’s all about.”

Don’t feel bad for me!! This what I signed up! It wear and tears on your body over time! I’ve been doing this 15 years!! Trust the process.. head up chin up and grind

The hope for Derrius Guice had been to not have surgery. But the knee wasn’t improving, and he wanted Dr. Andrews to examine it. If he has surgery today — which is possible — it would be to trim the meniscus. https://t.co/mfDFCjW3jY