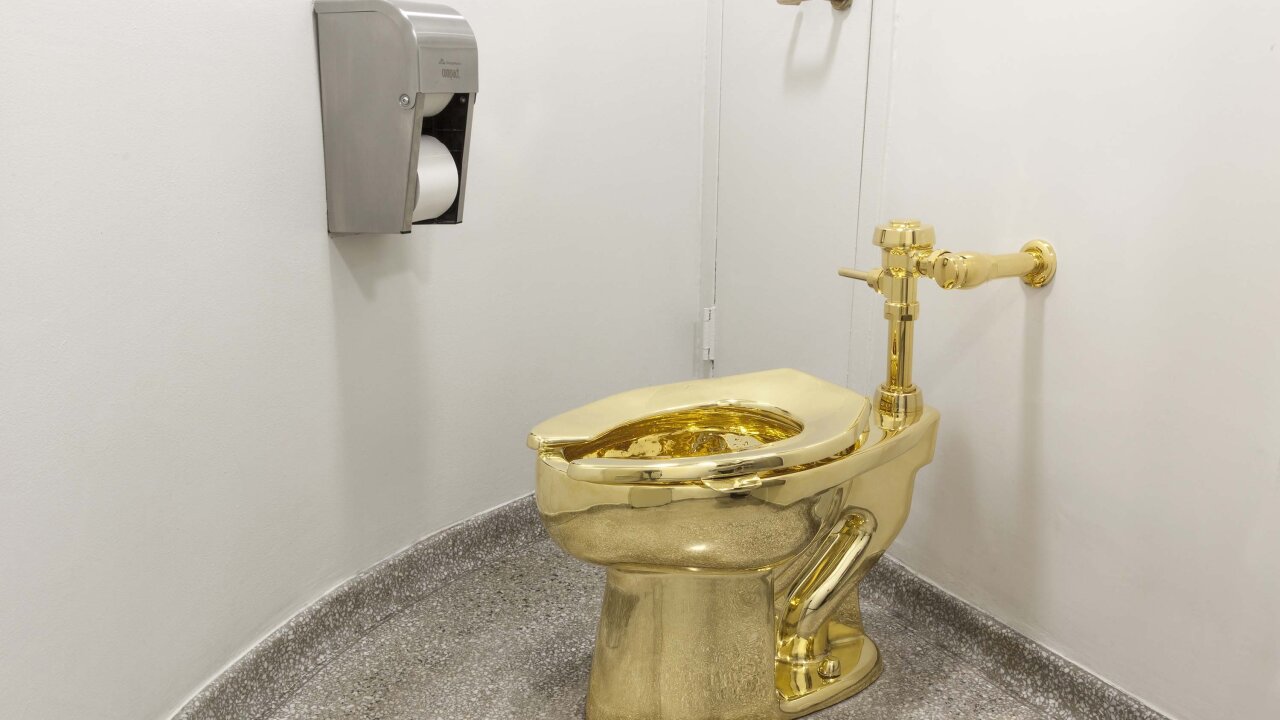 Police are trying to recover a toilet made entirely from 18-carat-gold that was stolen Saturday morning from Blenheim Palace in Oxfordshire, England, the stately home where former prime minister Winston Churchill was born.

The fully functioning toilet was installed as part of an exhibition by Italian artist Maurizio Cattelan titled “Victory is Not an Option,” which only opened to the public on Thursday. The palace will be closed for the rest of the day, a spokesperson said on Twitter.

According to a Blenheim Palace spokesperson, Cattelan values the toilet, titled “America,” at over $5 million.

Thames Valley Police received a report of the toilet’s theft at 4:57 a.m. Saturday morning. The thieves left the scene at about 4:50 a.m., according to a statement posted online. A 66-year-old man has been arrested in connection with the theft.

Detective Inspector Jess Milne said in the statement: “Due to the toilet being plumbed in to the building, this has caused significant damage and flooding, adding, “We believe a group offenders used at least two vehicles during the offense.”

“The artwork has not been recovered at this time but we are conducting a thorough investigation to find it and bring those responsible to justice,” Milne continued, appealing for any potential witnesses to contact police.

Dominic Hare, CEO of Blenheim Palace, told CNN in a statement, “‘Following the Thames Valley Police statement we can confirm ‘America’, the art piece by Maurizio Cattelan has been stolen in the early hours of this morning.”

“We are saddened by this extraordinary event, but also relieved no one was hurt. We are very grateful to our staff and to Thames Valley Police for their rapid and brave reactions,” he continued. “We knew there was huge interest in the Maurizio Cattelan contemporary art exhibition, with many set to come and enjoy the installations.”

“It’s therefore a great shame an item so precious has been taken, but we still have so many fascinating treasures in the Palace and the remaining items of the exhibition to share. The investigation continues, but it will be business as usual from tomorrow, so visitors can continue to come and experience all we have to offer,” Hare said.

In an August interview with the Times, Edward Spencer-Churchill, the current Duke of Marlborough’s half-brother and founder of the Blenheim Art Foundation, dismissed the possibility that the toilet could be stolen.

“It’s not going to be the easiest thing to nick,” Spencer-Churchill said. “Firstly, it’s plumbed in and secondly, a potential thief will have no idea who last used the toilet or what they ate. So no, I don’t plan to be guarding it.”

“America” first went on display at the Guggenheim in New York City in 2016. It made headlines again in 2017, after US President Donald Trump’s White House emailed the Guggenheim asking to borrow Vincent Van Gogh’s 1888 painting “Landscape with Snow”; instead, the institution’s curator offered the gold toilet.

At Blenheim Palace, the toilet was installed in a room next to the one in which Churchill was born. A statement announcing the exhibition said the work could be perceived as a comment on the social, political and economic disparities in the United States.

“His work can make us laugh and quake in turn, with its acerbic comments on the world we live in. I believe that his wry wit, stoicism and fantastical vision are exactly what we need in these times of global flux and uncertainty,” Spencer-Churchill said in a statement.

The toilet was due to remain on display until October 27.