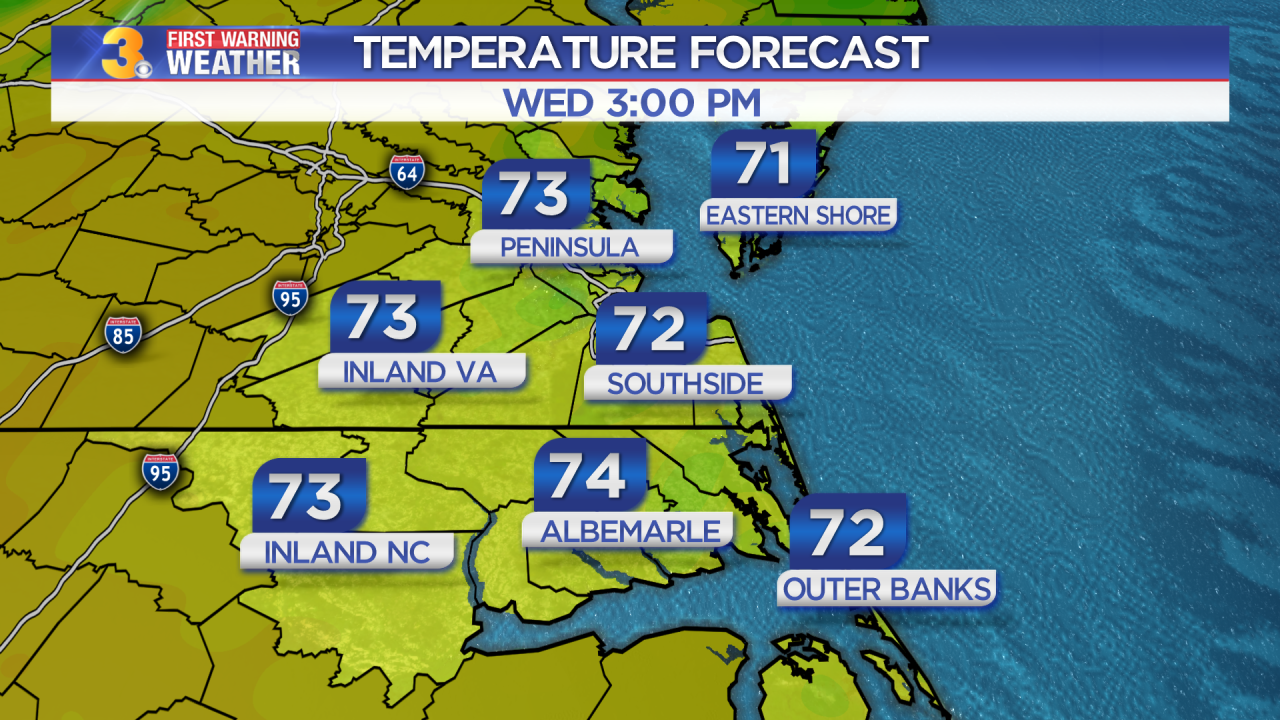 A fall-like end to the work week… Highs will drop to the low and mid 70s today, below normal for this time of year. Humidity will continue to drop, making it feel more refreshing. We will see partly cloudy skies today with an isolated shower possible. It will still be windy today with NE winds at 10 to 20 and gusts to 30 mph. The persistent NE winds will trigger some minor flooding during times of high tide today and tomorrow.

We will cool to the low 70s on Thursday with low humidity. It will be partly cloudy with an isolated shower possible. It will still be windy on Thursday, NE at 10 to 20 mph.

Hurricane Humberto will move closer to Bermuda this week. The rough surf and a high risk for rip will continue for the next few days.

Expect mostly sunny skies for Friday and the weekend. Highs will warm to the mid 70s on Friday, low 80s on Saturday, and mid 80s on Sunday. Humidity will slowly increase through the weekend.

Hurricane Humberto even stronger as it moves closer to Bermuda. Humberto is centered about 195 miles west of Bermuda and moving ENE at 16 mph. On the forecast track, the core of Humberto is expected to pass just to the northwest and north of Bermuda later tonight.

Maximum sustained winds have increased to near 120 mph with higher gusts. Humberto is a category 3 hurricane on the Saffir-Simpson Hurricane Wind Scale. Humberto should remain a powerful hurricane through early Thursday while it passes close to Bermuda. A steady weakening trend should begin later on Thursday.

Tropical Storm Jerry strengthening over the central tropical Atlantic. Jerry is centered about 855 miles east of the Leeward Islands and moving WNW at 14 mph. On the forecast track, the system will be near the northern Leeward Islands Friday and pass north of Puerto Rico on Saturday.

Maximum sustained winds have increased to near 50 mph with higher gusts. Jerry is forecast to become a hurricane by late Thursday, with little change in strength anticipated on Friday and Saturday.