As more rain fell Thursday in the Houston area, swelling rivers and creeks and pushing floodwaters into the streets, officials said at least one person has died from the storm, a man who was pulled from a submerged van.

The remnants of former Tropical Depression Imelda are causing serious flooding in Houston and its suburbs, trapping people in homes and vehicles and spurring urgent rescues.

Flooding is most serious just north of Houston and to the east, including the city of Beaumont, where police said they’ve received hundreds of calls for rescues and were begging people not to drive because most roads were flooded.

Boats were used to rescue residents from their houses and trapped vehicles in flooded neighborhoods in east Houston.

The man who died was in his 40’s or 50’s and was one of at least three people extracted from a submerged van, according to Harris County Sheriff Ed Gonzalez.

The driver of the van was approaching a freeway when he paused briefly, then drove into water that was 8 feet deep, causing the van to submerge, Gonzalez said.

The storm, formerly a tropical storm and a tropical depression, has brought intense rain to southeastern Texas since Tuesday. Some areas have received more than 30 inches and one spot in Jefferson County got 43.15 inches, according to the National Weather Service office in Houston.

• The Harris County Sheriff’s Office tweeted that it had conducted 133 water rescues by noon CT.

• Flights were being delayed at Houston’s George Bush Intercontinental Airport on Thursday in part because roads around the airport were flooding.

• The National Weather Service urged residents of four Houston-area counties to stay indoors because of flash flooding. This included people in Montgomery, Liberty and Chambers counties, as well as northeastern Harris County, which includes the communities of Kingwood and Humble.

• In Jefferson County east of Houston, the Green Pond Gulley levee near Beaumont “is deteriorating and could break at any moment,” prompting an evacuation of the Gilbert Lake Estates area, the Jefferson County Sheriff’s Office said. Some parts of the county had seen more than 20 inches of rain in the past 24 hours. 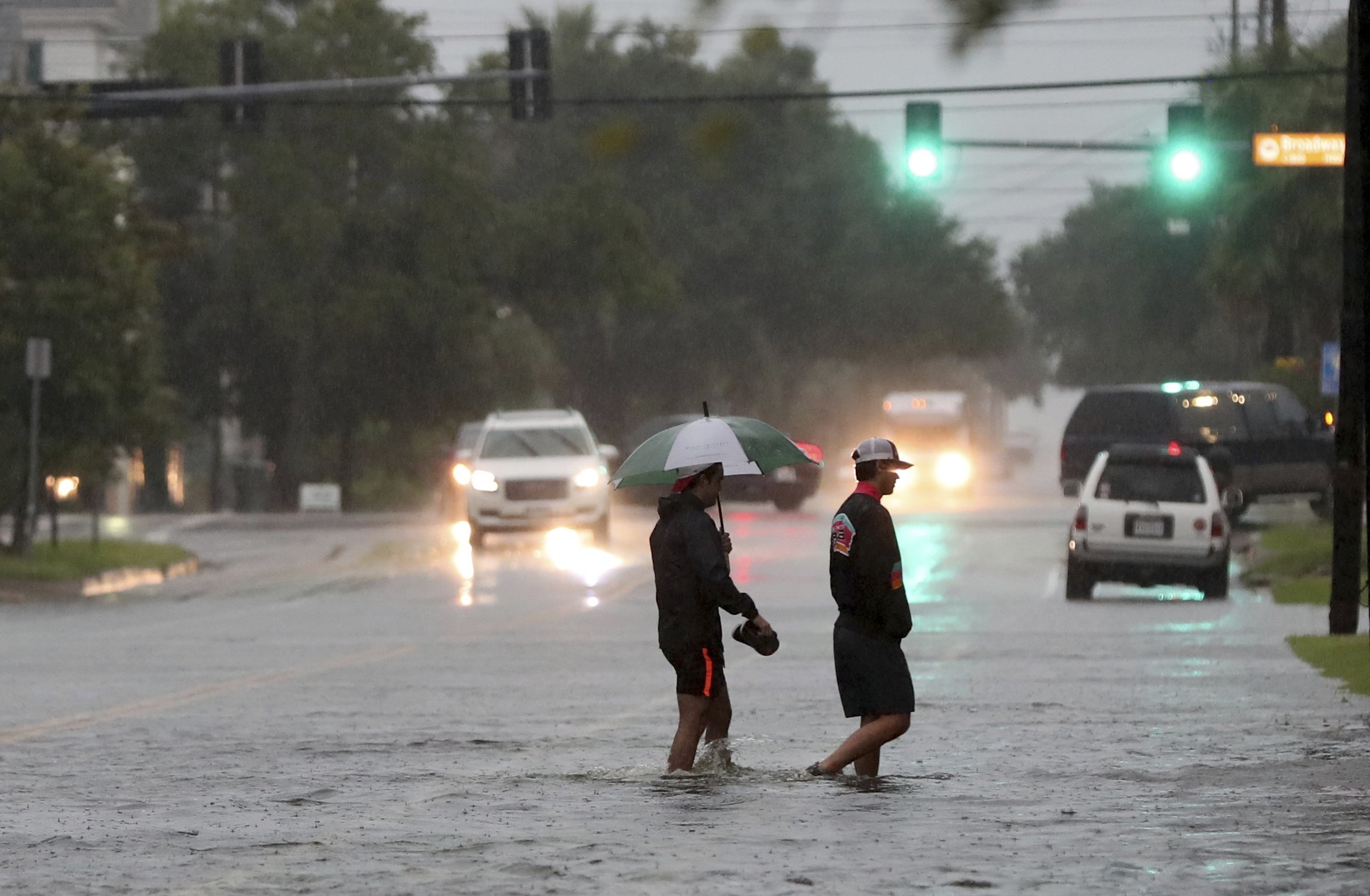 Desperation in Beaumont and elsewhere

In the Beaumont area of Jefferson County, some neighborhoods looked like lakes Thursday. Video posted by state game wardens showed rescuers in an airboat, speeding down covered streets to surrounded homes.

“The situation here is turning worse by the minute,” Michael Stephens, trapped by floodwaters at an apartment complex in the nearby city of Vidor, told CNN Thursday morning.

From inside, Stephens recorded video of people trudging through floodwater outside. He said for this area, the flooding seemed worse than he remembered from 2017’s deadly Hurricane Harvey.

In Beaumont, ankle-deep water had collected in the lobby of the Elegante Hotel, and more was coming in, video recorded by Lupe Torres on Thursday showed.

Beaumont police said the city received 12 to 20 inches of rain from Wednesday evening into Thursday morning, with more to come.

Related: Tropical Storm Imelda makes landfall in Texas, and Houston may get the most rain from one system since Harvey

Drivers trapped on I-10 near Winnie

In the community of Winnie — between Houston and Beaumont — floodwaters intruded onto Interstate 10 and surface streets Thursday morning, trapping motorists on the highway and surrounding businesses. A photo on social media showed a truck almost submerged near a hotel.

Steve Castle told CNN floodwaters had him stuck in his truck on I-10 early Thursday.

“I was supposed to be driving back to Houston. I don’t think I’m going anywhere soon,” Castle said from his truck.

In Chambers County, which includes Winnie, at least 200 homes were taking on water, Sheriff Brian Hawthorne said. The sheriff’s office said it was reaching trapped people with high-water rescue vehicles and airboats.

Richard Tyson, waiting out the storm overnight in his bait and tackle shop, said he hasn’t seen flooding like this since Hurricane Harvey and in this community, he said, Thursday’s flooding might be worse.

More than a foot of water collected in his parking lot, and he cleared items off his floor in case the water comes in, he said.

“There’s no containing this (storm), brother. It’s doing what it wants,” Tyson said.

In Spring, north of Houston, Edward and his wife were returning home from after dropping their nephew at his house after school when they saw some ranchers, horses and passersby struggling in the floodwaters.

The couple pulled over and noticed everyone in the water was fighting to get the horses out, and in the process, one man was swept into the bushes by the current. Once the group was able to get the horses out safely, they went back in for the man and pulled him out as well.

Both the horses and people were all rescued.

The storm is in East Texas and slowly moving northeast. Flash flood watches are in effect Thursday more millions of people across East Texas and western Louisiana.

In Louisiana, the storm could bring 3 to 5 more inches of rain — with isolated amounts as high as 10 inches — on Thursday, the National Weather Service said.

Still, the city may receive more than 12 inches of rain before the storm is over, and some streets have flooded.

Comparing rainfall from Harvey and Imelda

Imelda is causing some of the most serious flooding in southeastern Texas since Hurricane Harvey, which created major problems in August 2017.

Generally, Harvey, which claimed dozens of lives and caused billions of dollars in damage, dropped more rain than Imelda.

Harvey broke the US record for rainfall from a single storm, dumping more than 60 inches about 90 miles east of Houston. Harvey left 34 inches of rain at Houston’s George Bush Intercontinental Airport, and more than 40 inches in areas east of the city.