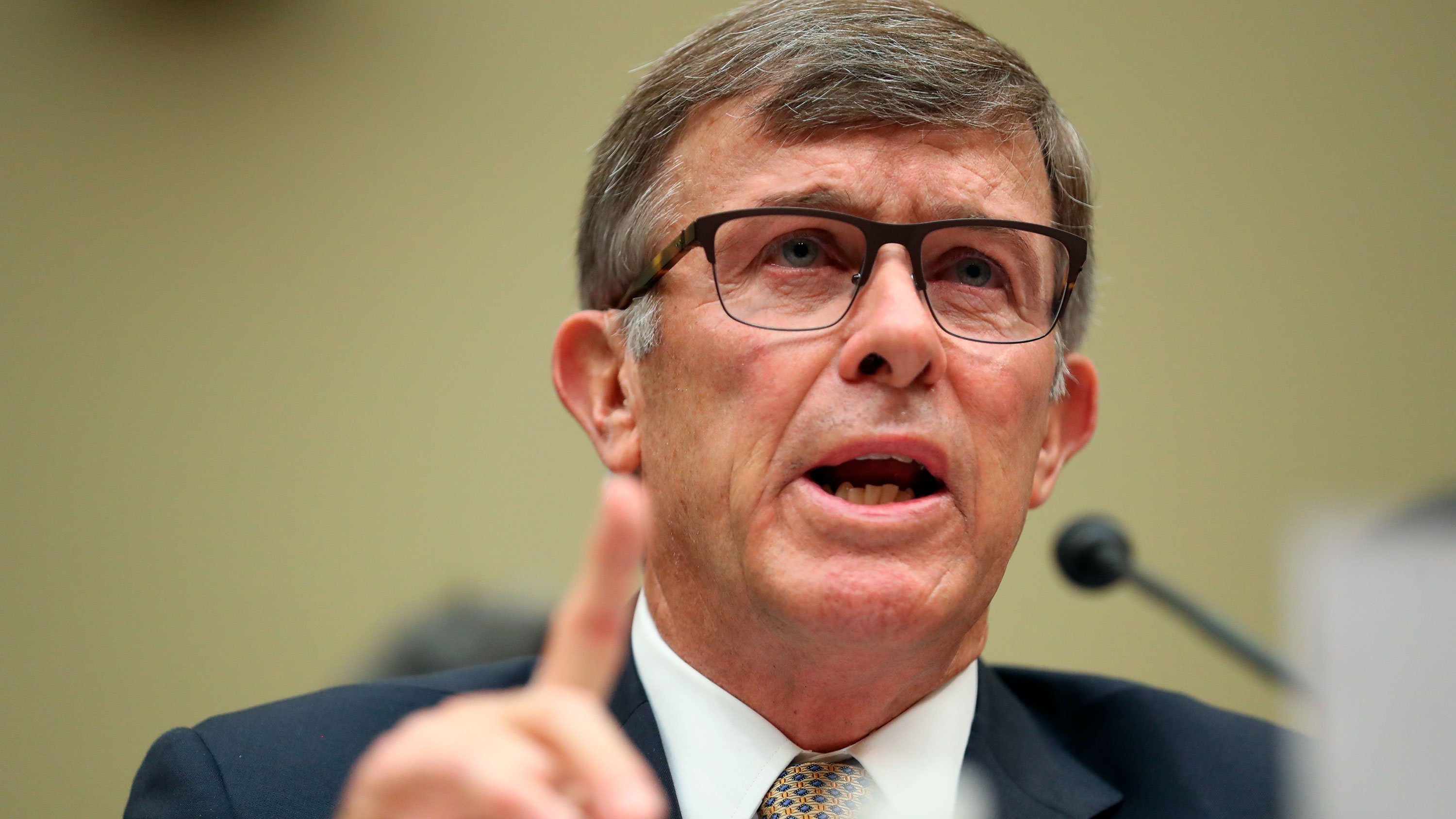 America’s top spy broke with Donald Trump and his Republican supporters Thursday, defending a whistleblower and intelligence committee watchdog who exposed contacts with Ukraine that could help lead to the President’s impeachment.

“I believe that the whistleblower and the inspector general have acted in good faith throughout. I have every reason to believe that they have done everything by the book and followed the law,” said acting Director of National Intelligence Joseph Maguire, testifying before a key House committee.

But Maguire declined to say whether he spoke to the President about the whistleblower complaint that alleged that Trump solicited the help of Ukraine to interfere in the 2020 election and that White House officials tried to hide his conduct, in the latest twist of a fast-escalating drama that has turned into the most serious crisis of Trump’s presidency.

“I am not partisan and I am not political,” said Maguire, a former Navy SEAL commander who served eight presidents in uniform and was not a well-known public figure until he was thrust into the glare of the scandal.

Democrats used the high profile forum to accuse the President of abusing his power and endangering national security. Republicans tried to pick holes in the complaint, noting that the unidentified whistleblower admitted not having first-hand knowledge of events including Trump’s call with Ukrainian President Volodymyr Zelensky.

Under intense pressure from Democrats on the House Intelligence Committee, Maguire also acknowledged that his office consulted with the White House counsel’s office after receiving a complaint detailing allegations about Trump’s communications with Ukraine, because calls with foreign leaders usually fall under executive privilege.

Maguire had been accused before the hearing of caving into White House pressure not to follow the law and turn over a complaint that the intelligence community’s inspector general deemed “urgent and credible.”

The acting DNI repeatedly defended his handling of the complaint, telling lawmakers he followed the law in an “unprecedented” situation, despite claims to the contrary by Democrats that he infringed on their right to review the allegations.

His appearance before the committee and a closed door briefing before the Senate panel, came a day after lawmakers had their first chance to see the classified account that spurred Democrats to launch a formal impeachment inquiry. The account was declassified and released Thursday morning.

Allegations of a ‘coverup’

The complaint states that several White House officials were “deeply disturbed” by Trump’s July 25 phone call with Zelensky and tried to “lock down” all records of the phone call, especially the word-for-word transcript produced by the White House.

Maguire said during his testimony he did not have the authority to waive the executive privilege that covered the conversation with Ukraine’s President and would not say whether he discussed the complaint with Trump.

But in a tense exchange with Democratic Rep. Eric Swalwell of California, Maguire conceded that “there is an allegation of a coverup.”

“But right now, all we have is an allegation — an allegation with second hand information from a whistleblower. I have no knowledge on whether or not that is true and accurate statement,” he said.

When asked later in the hearing if Trump asked him to disclose the identity of the whistleblower, Maguire told lawmakers,” I can tell you emphatically, no.”

He also said no one else within the White House or DOJ asked him to identify the whistleblower.

Initially, Maguire seemed to waver about the chronology of events related to his handling of the complaint but ultimately told lawmakers on the House Intelligence Committee that his office did seek guidance from the White House before raising the issue with the Office of Legal Counsel and Department of Justice, which advised he was not legally bound to provide it to the committee.

“Such calls are typically subject to executive privilege, as a result we consulted with the White House counsel’s office and were advised that much of the information of the complaint was in fact subject to executive privilege,” Maguire said. “A privilege that I do not have the authority to waive. Because of that we were unable to immediately share the details of the complaint with this committee.”

The Office of the Director of National Intelligence has provided a redacted version to Congress that members can bring to an open hearing, a spokesperson said.

The anticipation ahead of Maguire’s testimony was also amplified by the White House’s decision to release a transcript of Trump’s July 25 phone call with the leader of Ukraine that shows the President repeatedly pressed his counterpart to investigate former Vice President Joe Biden and his son. There is no evidence of wrongdoing by either Joe or Hunter Biden.

The conversation between Trump and Ukrainian President Volodymyr Zelensky is included in the whistleblower complaint, a source familiar with the situation said last week, a revelation that only raised more questions in the ongoing controversy.

On Tuesday, House Speaker Nancy Pelosi declared the President had betrayed his oath of office and announced she is opening a formal impeachment inquiry, a move that has raised the stakes of this week’s events.

House Intelligence Chairman Adam Schiff, a California Democrat, started the hearing by accusing Trump of betraying his oath of office and compromising US national security for Trump’s “personal, political benefit,” referring to the conduct outlined in the call transcript released Wednesday.

“It forces us to confront the remedy the founders provided for such a flagrant abuse of office: impeachment. Now this matter would not have come to the attention of our committee or the nation’s attention without the courage of a single person- the whistleblower,” he said.

Republicans, however, keyed in to the fact that the whistleblower acknowledged they did not have firsthand knowledge of most of the events described in the complaint.

“I was not a direct witness to most of the events described,” the whistleblower wrote, noting that they were aware of details in the complaint pertaining to Trump’s July 25 phone call with the Ukrainian President because of “White House officials with direct knowledge of the call.”

But the public now has a way to test the accuracy of at least part of the whistleblower’s complaint by comparing the details related to that call to the transcript released by the White House Wednesday. By all appearances, the information is consistent.

In his testimony Thursday, Maguire continued to defend his handling of the whistleblower complaint, saying he was told by the Department of Justice it did “not meet the statutory requirement of ‘urgent concern,'” required to transmit to Congress and insisted that decision was “binding.”

“After reviewing the complaint, and the inspector general’s transmittal letter, the office of legal counsel determined that the complaint’s allegations do not meet the statutory requirement definition (of) legal, urgent concern, and found that I was not legally required to transmit the material to our oversight committee,” he added.

Last week, Maguire refused to comply with a deadline to hand over a whistleblower complaint to the House Intelligence Committee that had been deemed by the intelligence community inspector general to be “credible and urgent,” a conclusion that drove his push to provide Congress with the details and refer the matter to the Justice Department for consideration of criminality.

Maguire suggested during his testimony that he understood the importance of the complaint itself.

“I realized … full and well the importance of the allegation,” Maguire said, adding later, “when I saw that, I anticipated having to sit in front of some committee some time to discuss it.”