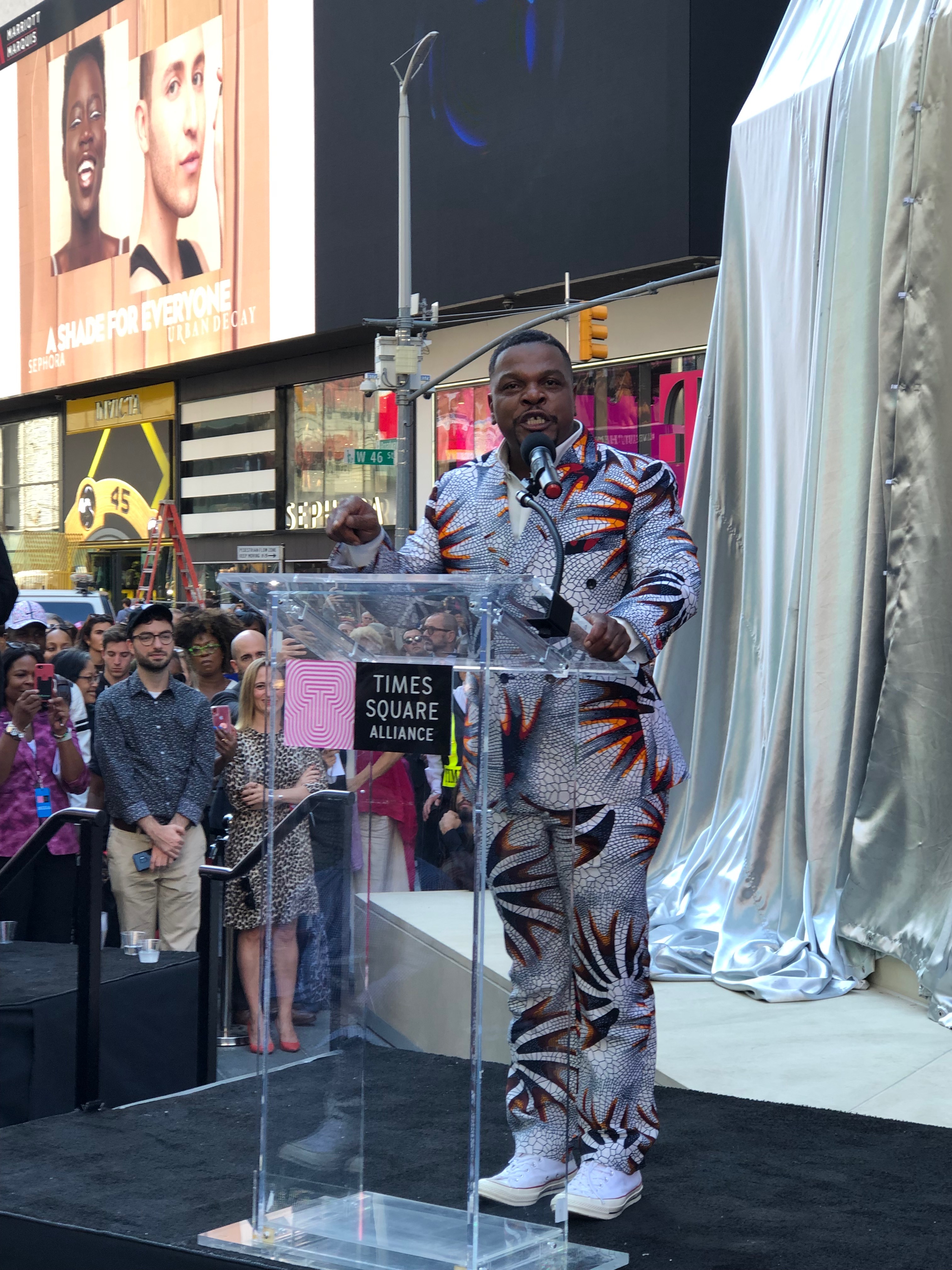 NEW YORK — Artist Kehinde Wiley’s monumental statue “Rumors of War” was unveiled in Times Square on Friday to an estimated 350 attendees. The statue is Wiley’s response to the Confederate sculptures scattered throughout the South, especially in Richmond, Virginia.

“This is his first attempt at a monumental sculpture, and I’d have to say he pretty much hit it out of the park,” Virginia Museum of Fine Arts Director Alex Nyerges said.

The statue depicts a young African American man wearing street clothes atop a rearing horse. The body language of the subject is triumphant and confident. “Rumors of War” is closely modeled after the statue of Confederate general J.E.B. Stuart found in the center of Stuart Circle along Monument Avenue in Richmond.

According to Sean Kelly Gallery founder Sean Kelly, “Rumors of War” is 27 feet tall, and 1 foot taller than the statue of Stuart. The New York-based art gallery represents Wiley and other established artists. It co-sponsored the unveiling along with the VMFA and the Times Square Alliance.

Wiley has become known for paintings depicting African American men and women shown in classical poses. His paintings are inspired by masters from the Renaissance and Rococo eras of art but with a contemporary and political twist. In 2018 he unveiled the official portrait of President Barack Obama in the Smithsonian National Gallery, garnering worldwide attention.

Media and guests at the unveiling began gathering at 12:30 p.m. in one of the main medians of Times Square. The statue loomed large, draped in a silver cloth. People on their lunch break and other onlookers sat outside a fence surrounding the area, many stopping to ask what was going on.

Related: Richmond is getting a new statue; and it’s in direct response to Confederate monuments

A temporary security fence formed a roughly 500-square-foot border around the statue.

After comments from Nyerges, Kelly and Richmond Mayor Levar Stoney, Wiley stepped up to the podium to deliver a short but passionate explanation behind the process of creating “Rumors of War.”

“Let’s get this party started,” Wiley declared, and the cloth was pulled back revealing the statue to the audience.

Wiley came up with the idea to create the statue during the 2016 showing of a retrospective of his work at the VMFA. Nyerges said Wiley approached the museum about collaborating on the project.

“When they approached us the question was, ‘Would you be interested in working with us on a project like this,’ and of course the answer was an instant ‘yes,’” Nyerges said. “Then when Kehinde and Sean came back to us with some visuals and a conceptual of what it looked like, we were blown away.”

The statue has been under construction for almost three years. Kelly said he feels overjoyed to have Wiley’s newest work completed and released.

“The beginning of the journey is absolutely terrifying if you think about what you’re getting yourself into,” Kelly said. “Unveiling it today is like giving birth; it’s super exciting and amazing. There’s nothing but euphoria and joy at this point.”

Stoney addressed how “Rumors of War” will fit into the ongoing conversation about the monuments on Monument Avenue. Five other statues honoring Confederates, and one statue in tribute to tennis legend Arthur Ashe, are erected along a 1.5-mile stretch of the city street.

In recent years there has been considerable debate about whether to remove the monuments. The mayor established a commission to study and make recommendations on the removal or relocation of the monuments. The panel’s final report called for removal of the Jefferson Davis statue, and the addition of context to the others.

“Our friends who worked on the Monument Avenue Commission stated that addition has to be part of the recipe for us balancing the scales in Richmond in terms of the monuments we currently have to the Lost Cause [the narrative that the Confederacy was justified in its rebellion, minimizing the role slavery played in causing the Civil War] and balancing that with heroes and sheroes from African American culture,” Stoney said.

The statue will be on temporary public display until Dec. 1 and then moved to its permanent home at the VMFA in Richmond. The public can see the statue unveiled for a second time Dec. 10 on the museum’s front lawn along Arthur Ashe Boulevard.