Some teachers in Florida can carry guns inside classrooms now 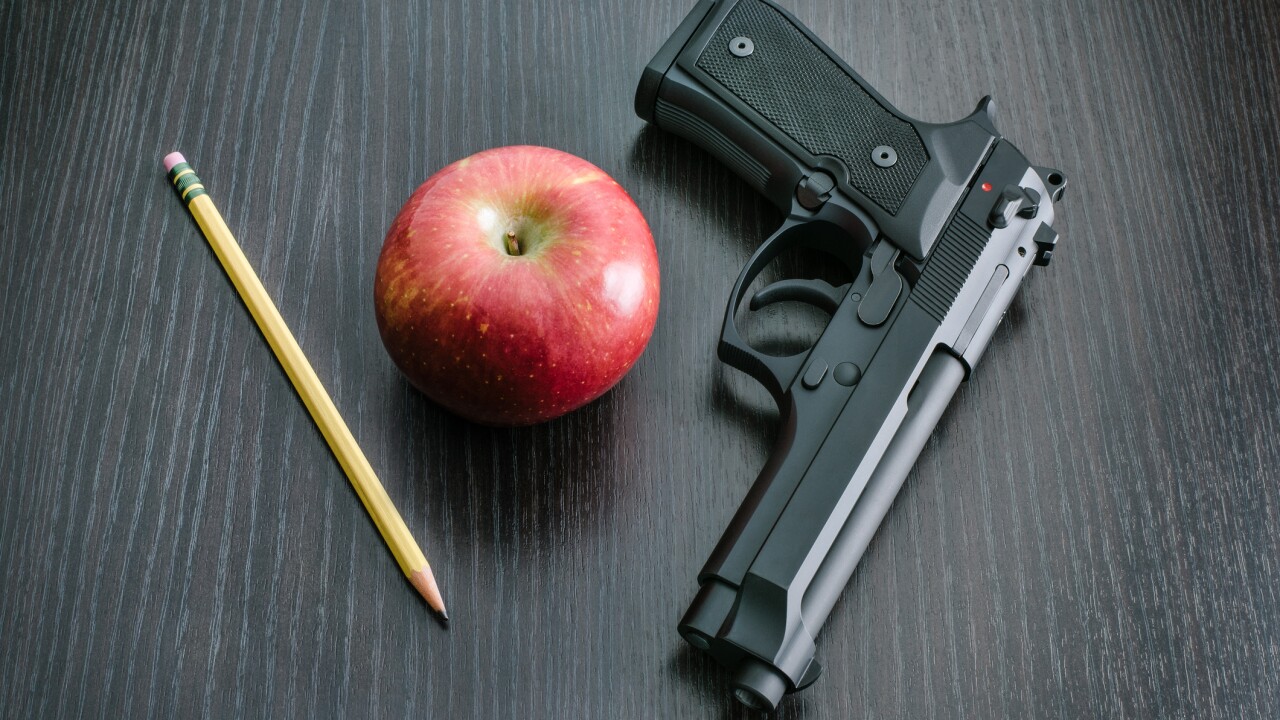 9mm Beretta 92FS type handgun with apple and pencil depicting the question whether to arm teachers in the classroom to defend students against active shooters.

As of October 1, some Florida teachers can carry firearms on campus.

As of October 1, some Florida teachers can carry firearms on campus.
The measure is part of a controversial bill Florida Gov. Ron DeSantis signed in May. The legislation was based on recommendations made in response to the mass shooting at Marjory Stoneman Douglas High School in February 2018.

The measure is part of a controversial bill that Gov. Ron DeSantis signed in May. The legislation was based on recommendations made in response to the mass shooting at Marjory Stoneman Douglas High School in February 2018.

The bill authorizes school districts to implement at least one school-safety officer per public school. The definition is broad and could include a school resource officer, law enforcement official employed by the district, a school security guard or a school guardian.

Before the bill was passed, teachers were prohibited from serving as “guardians” in schools, according to the bill’s text.

But that was before the Parkland massacre.

In 2018, the Marjory Stoneman Douglas High School Public Safety Commission founded the Coach Aaron Feis Guardian Program. Named for the Parkland faculty member who was killed in the attack along with 16 students and staff, the program allows schools to arm teachers and staff or personnel hired specifically as guardians in the case of an armed attack.

Guardians must pass psychological and drug screenings and complete at least 144 hours of training, according to the Florida Department of Education.

School districts may opt-in to the program, but the bill doesn’t require teachers or districts to participate.

So far, 39 out of Florida’s 67 counties opted to participate in the program, including Broward County, despite the school board’s initial refusal to join the program.

Some districts already arm teachers. Others have banned it

Arming teachers was already legal in some school districts before the mass shooting in Parkland. Since then, the debate around guns in schools has only grown more contentious.

In August, New York Gov. Andrew Cuomo passed legislation banning school districts from arming teachers, one in a bundle of bills meant to strengthen firearm regulations in the state.

“The answer to the gun violence epidemic plaguing this country has never been and will never be more guns,” he said at the time.

School districts in Texas, Utah, Arkansas and South Dakota have allowed educators and school staff to carry firearms for several years, though the length and frequency of required training varies by state.

All states except Hawaii, New Hampshire and Wyoming ban people from bringing guns on K-12 campuses, though eight allow concealed handgun permit holders to carry their weapons at school or have no law on the subject, according to the Giffords Law Center to Prevent Gun Violence.

Two years earlier on the same date, nine people were shot to death at a community college in Roseburg, Oregon.