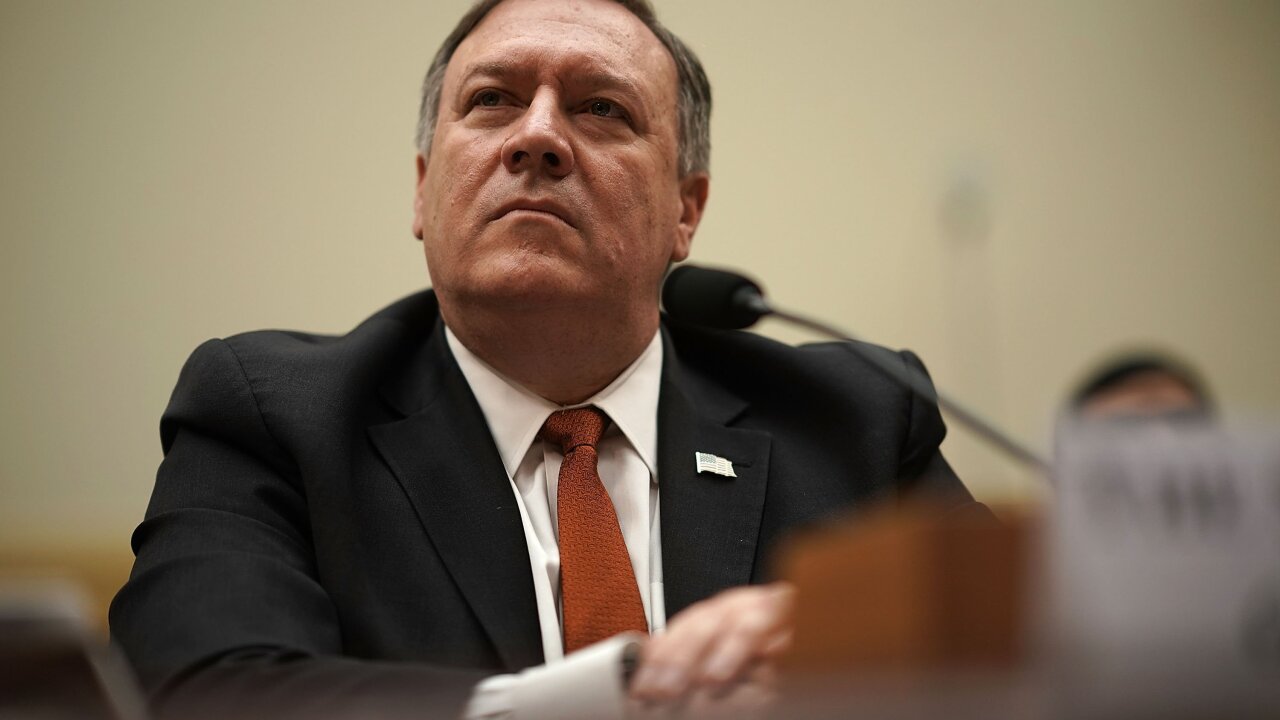 The US imposed sanctions Thursday against China’s military for its purchases of Russian military equipment in a move US officials said is meant to punish Moscow for its “malign activities,” including attacks on American elections.

A State Department inspector general will brief congressional committees Wednesday after requesting an “urgent” meeting in a new twist to the impeachment inquiry that has pitched Donald Trump’s presidency into its deepest-ever crisis.

The US imposed sanctions Thursday against China’s military for its purchases of Russian military equipment in a move US officials said is meant to punish Moscow for its “malign activities,” including attacks on American elections.

The meeting will come after Secretary of State Mike Pompeo admitted he was on the now-notorious July 25 call between Trump and Ukraine’s President that ended up triggering the impeachment inquiry.

Speaking at a news conference in Rome, Pompeo again accused Democrats of “bullying” State Department staffers, after seeking to prevent several important witnesses from appearing on Capitol Hill in the coming days. The move appeared to be an attempt to buy time to come up with a long term blueprint to save Trump by turning the politics of impeachment.

Pompeo’s initiative was at least more substantive than Trump’s tweeting and cable news appearances from conspiracy-theory touting supporters that constituted his early defense.

But the sharp Democratic response to Pompeo’s claims of bullying against potential witnesses, and a key source’s decision to show up anyway, suggested that the added gravity of a formal impeachment process could shift Washington’s balance of power.

It is only a week since House Speaker Nancy Pelosi formally announced an impeachment probe into evidence that Trump pressured Ukraine to dig up dirt on his potential 2020 rival Joe Biden. But the drama has turned Washington on its head and comprehensively altered the dynamics of the Trump presidency.

Trump appears under siege from multiple directions. Late Tuesday, for example, The New York Times cited administration officials as saying the President previously suggested fortifying his southern border wall with a trench filled with alligators and snakes and wanted to shoot undocumented migrants in the legs.

The latest fast-moving developments show how Democrats are using their constitutional authority to quickly build a framework for their investigation.

“This is an extraordinary crime. I suspect this is the greatest crime a president has committed in my lifetime,” Rep. Mike Quigley, a Democratic member of the House Intelligence Committee told CNN’s John Berman Tuesday.

The pace is sure to heat up Wednesday with Pelosi and House Intelligence Chairman Adam Schiff and the President himself expected to hold news conferences.

Trump offered Americans a glimpse into the state of his mind at the end of a tumultuous day with a unfounded tweet that warned illegal attempts were underway to steal the votes and constitutional rights of his supporters.

“As I learn more and more each day, I am coming to the conclusion that what is taking place is not an impeachment, it is a COUP,” Trump declared.

Aside from the inflammatory social media posts, the White House clearly understands that its best interests lie in stalling the inquiry for as long as possible, likely with legal challenges challenging subpoenas to give its surrogates time to fog the case and to build public frustration with impeachment.

A day after being subpoenaed for documents related to his role in consultations with Ukraine, Rudy Giuliani, the President’s personal lawyer, engaged his own counsel, and in an historical echo chose former Watergate prosecutor Jon Sale.

The former New York mayor has not said if he will comply with the subpoena. But he could be an early test case of the administration’s intentions to gum up the impeachment works with contentious legal challenges that could last for months.

“I really have to study it. I can’t shoot from the hip,” Sale told CNN’s Michael Warren.

“Every time I turn around, Rudy’s on another TV show,” Sale continued. “He and I could have a conversation, and then I turn on the television and he could be doing something else.”

Pompeo, one of the President’s most valued aides, launched the most serious attempt yet by the administration to disrupt the impeachment investigation.

In a letter to House Foreign Relations Committee Chairman Eliot Engel, he said the proposed timetable for witnesses to testify in the coming days was too compressed.

In a tweet, the nation’s top diplomat warned the request could be “understood only as an attempt to intimidate, bully, & treat improperly the distinguished professionals of the Department of State, including several career (foreign service officers).”

The Democratic response was swift, reflecting an apparent belief among party leaders that they have the upper hand over the administration in the early stage of the probe.

In a letter to Pompeo, who is in Europe, the chairmen of the House Intelligence, Foreign Affairs and Oversight committees said that holding back testimony “is illegal and will constitute evidence of obstruction of the impeachment inquiry.”

In effect, the chairmen were warning that an attempt to frustrate the impeachment inquiry could eventually itself turn into a rationale for impeachment.

The administration has been largely successful in derailing previous Democratic efforts to oversee the White House by launching legal challenges and sweeping executive privilege claims. But impeachment already looks like a different animal.

The lawmakers also accused Pompeo of intimidating State Department witnesses to protect himself and the Ambassador Kurt Volker, the former special envoy to Ukraine who had been scheduled for a deposition on Thursday, has made clear he still plans to show up, despite Pompeo’s letter.

The other officials schedules to be deposed by the House Foreign Affairs Committee include former US Ambassador to Kiev Marie “Masha” Yovanovitch, Counselor T. Ulrich Brechbuhl and Ambassador Gordon Sondland — who were mentioned in the whistleblower complaint that helped trigger the impeachment push.

A fifth official — Deputy Assistant Secretary George Kent — has overseen policy on Ukraine at the State Department since September 2018 and was previously the deputy chief of mission at the US Embassy in Ukraine.

Yovanovitch, who was previously scheduled to appear Wednesday, will now do so on October 11 with the agreement of both the Committees and counsel, a congressional aide told CNN.

Democrat calls for Trump to be jailed

The President stayed out of sight at the White House on Tuesday. But he was as active as ever on Twitter, seeking to discredit the whistleblower much as he attempted to impugn the credibility of special counsel Robert Mueller.

“If the so-called ‘Whistleblower’ has all second hand information, and almost everything he has said about my ‘perfect’ call with the Ukrainian President is wrong (much to the embarrassment of Pelosi & Schiff), why aren’t we entitled to interview & learn everything about…the Whistleblower,” Trump wrote, decrying another “Democratic hoax.”

And on Monday, Atkinson issued a highly unusual statement rejecting the central plank of Trump’s argument — that the whistleblower based his complaint on hearsay.

While events seemed to be running largely in the favor of Democrats on Tuesday, there was another sign of a breach in discipline that could harm their efforts to avoid the political pitfalls of impeachment.

“I’m calling on the GOP to stop Trump’s filthy talk of whistleblowers being spies & using mob language implying they should be killed,” California Rep. Maxine Waters tweeted. “Impeachment is not good enough for Trump. He needs to be imprisoned & placed in solitary confinement.”

The tweet was a far cry from Pelosi’s request for her party to approach the impeachment process in a non-partisan and “prayerful” manner.