Egypt unveils discovery of 30 ancient coffins with mummies inside

Egyptian authorities on Saturday revealed the contents of 30 ancient wooden coffins discovered in Luxor and yes, they include mummies.

Mostafa Waziri, secretary general of the Supreme Council of Antiquities, told reporters the discovery was the country’s largest in more than a century.

It is the first cache of coffins to be discovered by an Egyptian mission, after years of foreign-led archeological digs.

The discovery was unveiled in front of Hatshepsut Temple at Valley of the Kings in Luxor.

They contained the mummified remains of men and women, as well as two children, who are believed to be from the middle class, Waziri said. 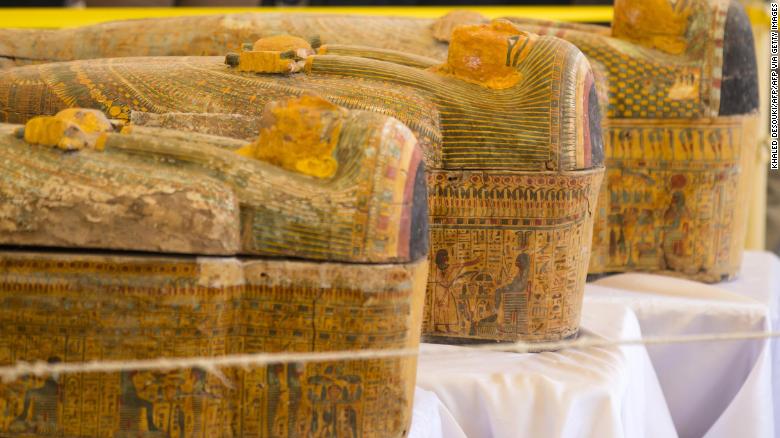 While the mummies were found completely wrapped in cloth, their genders could be identified by the shape of the hands on the coffin. Coffins which were carved with the hands open meant they were female, while if the hands were balled into fists, they held males, according to Waziri.

According to archaeologist Zahi Hawass, finding coffins belonging to a child is a rare occurrence. The discovery of two have caused tremendous interest “worldwide,” he said.

The coffins were sealed, stacked on top of each other and arranged in two rows about three feet below the sand, he said.

They are adorned with intricate carvings and designs, including Egyptian deities, hieroglyphics and scenes from the Book of the Dead, a series of spells that enabled the soul to navigate the afterlife. Names of the dead were also carved onto some of the coffins, Hawass said.

The inscriptions are especially unique because of the vivid colors, which stayed intact even though the coffins were buried for thousands of years. This is because ancient Egyptians used natural colors from stones, such as limestone, red oak, and turquoise, mixed with egg whites, according to Waziri.

After painting, egg yolk was mixed with candle wax and spread over the coffin to maintain a natural shine, which is still visible. he said.

Officials said the first coffin was discovered because its head was partially exposed. When they continued to dig, 17 more coffins were found. After those coffins were excavated, the archeologists discovered an additional 12.

The cache of coffins was most likely hidden to keep tomb robbers away from them, according to Waziri.

Hawass told reporters during a press event that the discovery reveals important details about ancient Egyptian burial rights, such as how they respected the dead regardless of gender or age.

“This will enrich our knowledge as Egyptologists about the belief of the afterlife,” Hawass said.

The mummies will be restored before being moved to a museum of ancient Egyptian artifacts near the Giza pyramids. The coffins will be given their own exhibit.

“They will be moved to the Grand Egyptian Museum, which will be opening at the end of 2020, as a new surprise for our visitors,” said El-Enany.