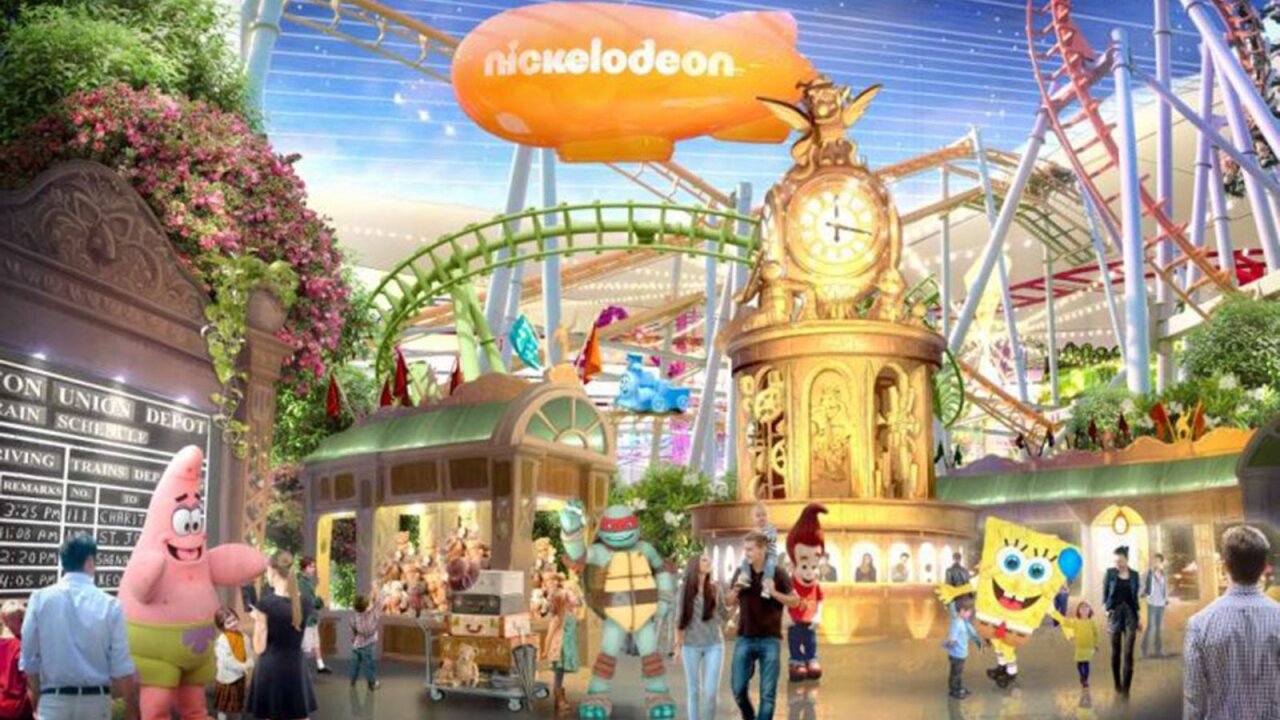 An artist’s rendition of the interior of the Nickelodeon Universe theme park set to open in New Jersey.

An artist’s rendition of the interior of the Nickelodeon Universe theme park set to open in New Jersey.

All your favorite Nickelodeon characters are coming to New Jersey.

Nickelodeon Universe, which at 8.5 acres will be the largest indoor theme park in North America, will open on October 25 at the American Dream mall in East Rutherford, New Jersey.

The park features more than 35 rides, roller coasters and attractions. Nickelodeon characters such as SpongeBob, Dora The Explorer and Teenage Mutant Ninja Turtles will be at the mall to meet.

The roller coasters include one named the Shellraiser, which features a plunging 122-foot drop.

Since no Nickelodeon attraction would be complete without slime, visitors can enjoy entertainment on the Nickelodeon Slime Stage.

Prices for the park are available but it is unclear when they will be on sale. A general ticket is priced at $39.99. For those interested in a more thrilling experience, there is an all-access ticket for $49.99. Children under 2 are free.

In November, the DreamWorks Water Park is set to open at the mall featuring more than 40 water slides and 15 attractions.

Mall has been planned since 2003

The American Dream mall has been in the works for 16 years. After false starts and multiple developers, it is finally opening. The mall is approximately 3 million square feet roughly divided into 55% entertainment and 45% retail space.

In 2018, a press release from New Jersey Gov. Phil Murphy said the $5 billion project created more than 23,000 jobs during its construction. The governor said the project is estimated to create more than 16,000 permanent new jobs on site and over 6,700 jobs in the surrounding communities

The retail portion of the mail is scheduled to open in March 2020. It will be open for just six days a week due to New Jersey’s blue laws, which are still in place in Bergen County, where the American Dream mall is located. Blue laws in Bergen County make it illegal to operate most non-food retail on Sunday and have been in place since the 1600s.

The complex is ready for a flood of visitors with 33,000 parking spaces for those planning to visit by car. For those interested in avoiding traffic, there will be a new daily express bus route that will run every 30 minutes by NJ Transit from Port Authority to American Dream starting October 25.

The New Jersey chapter of the Sierra Club has criticized the project over environmental concerns, projected traffic problems and government subsidies used to fund the project.

Triple Five Group, a private company is owned by the Ghermezian family, has developed mega-malls like the Mall of America and the West Edmonton Mall in Canada.