Comic, audience member call out Harvey Weinstein after spotting him at variety show 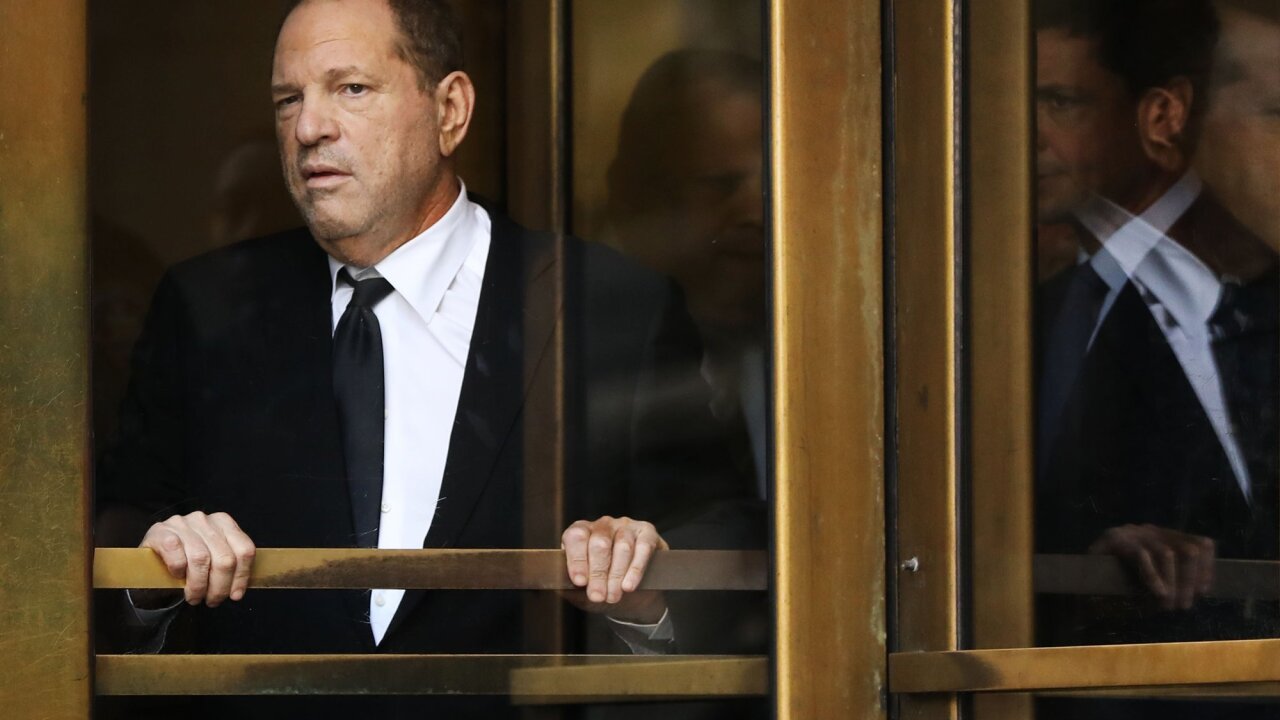 A night of comedy ended in a performer and an audience member being asked to leave a bar in New York City after they confronted Harvey Weinstein in the audience. Kelly Bachman was one of several performers at Manhattan’s Downtime Bar in a variety show sponsored by Actor’s Hour Wednesday night where, she told CNN, she spotted the former Hollywood producer.

A night of comedy ended with an audience member being asked to leave the venue after she and a performer called out Harvey Weinstein, who attended the show.

A night of comedy ended in a performer and an audience member being asked to leave a bar in New York City after they confronted Harvey Weinstein in the audience.
Kelly Bachman was one of several performers at Manhattan’s Downtime Bar in a variety show sponsored by Actor’s Hour Wednesday night where, she told CNN, she spotted the former Hollywood producer.

Kelly Bachman, one of several performers in a variety show at a Manhattan bar on Wednesday night, told CNN she spotted Weinstein and used part of her set to call the former Hollywood producer “Freddy Krueger” and call out the rape allegations against him.

Weinstein currently faces criminal charges of predatory sexual assault, criminal sexual act, first-degree rape and third-degree rape. He has pleaded not guilty and maintains all sexual encounters he’s been involved in have been consensual. His trial is expected to begin in January.

An audience member, Zoe Stuckless, also confronted Weinstein at his table and demanded he be asked to leave, according to video Stuckless shared on Facebook. Instead, Stuckless was asked to leave the bar, and Bachman left with Stuckless, the comic said.

The venue, Downtime Bar, confirmed in a statement posted to its Facebook page that an audience member was asked to leave after heckling another guest. “After several requests to stop were ignored, we kindly asked the heckler to leave,” the statement said. The bar’s Facebook page has since been deleted, but the statement is still posted as an Instagram Story on its Instagram page.

‘The elephant in the room’

Bachman said she did a triple take when she walked into the venue and saw Weinstein seated with a group of people at a table. The environment seemed welcoming, she said.

None of the performers before her commented on Weinstein’s presence, Bachman said, so she decided to take some of the time in her set to say something.

It’s unclear whether other performers were aware that Weinstein was in the room.

“I’m a comic, and it’s my job to name the elephant in the room. Anyone know what that is?” Bachman asked in a video of the performance, adding that “Freddy Krueger” was in the room.

“I have been raped, surprisingly by no one in this room, but I’ve never gotten to confront those guys,” she said. “So, just a general f*** you.”

Rose McGowan sues Harvey Weinstein for alleged campaign against her

Some audience members were heard cheering in the video, while others booed. Bachman said onstage she didn’t register the responses because she was in such a state of trauma from her own experiences.

“Harvey Weinstein was out with friends enjoying the music and trying to find some solace in his life that has been turned upside down,” a spokesperson for Weinstein said in a statement. “This scene was uncalled for, downright rude and an example of how due process is being squashed by the public, trying to take it away in the courtroom too.”

After addressing Weinstein, Bachman went back to her set, she said, both feeling like she hadn’t said enough and determined not to let the topic take up more of her performance time.

“I was just beating myself up like ‘you didn’t do enough, you didn’t say enough,'” she told CNN. “I had the same feelings about every time I’ve been sexually assaulted.”

It’s unclear whether Weinstein was invited to the event. But the host of Actor’s Hour, Alexandra Laliberte, said in a statement that she “did not consider the underlying implications of Mr. Weinstein’s presence and was naively overwhelmed by the entire situation that unfolded.”

“I want to sincerely apologize to any women who were re-traumatized this week at Actor’s Hour,” Laliberte said, adding that “a safe environment is what I set out to create for the acting community.”

Laliberte did not respond to follow up questions from CNN about whether she invited Weinstein to the event.

‘Nobody’s going to say anything?’

It was during the show’s intermission that Stuckless, the audience member, went over to Weinstein’s table and demanded he be asked to leave, according to Bachman.

“Nobody’s going to say anything?” Stuckless shouted in a video posted to Facebook.

Stuckless, who uses they/them pronouns, was then asked to leave, according to the video.

“I kept thinking about the fact that we were in a room full of young artists, young women creating art and being vulnerable on the stage, and this was the very community that Weinstein was able to terrorize for so many years,” Stuckless told CNN. When people at the club didn’t confront Weinstein, they felt that the same attitudes that allowed Weinstein’s behavior to go unchecked were being reproduced in the bar.

“That same culture of silence was happening in that room,” Stuckless said.

Bachman said that Stuckless being asked to leave while Weinstein was allowed to stay felt like an episode of “The Twilight Zone.”

“I really felt she was the bravest person in the room,” Bachman said. The comic and Stuckless left the venue together, Bachman said. Bachman had been looking for an excuse to leave, she told CNN, but the only way out was through a door near where Weinstein was seated.

Bachman felt she made the right decision in confronting Weinstein, she said, and by the following morning, she had received a wave of love and support.

Click here for our full coverage on the case against Harvey Weinstein.