The pier has damage due to a loose barge that struck it. The barge smashed into the pier, ripping it into two pieces.

Whether people are coming out to fish or just enjoy the view, this area gets a lot of foot traffic.

That's all about to change as the pier will be closed to be rebuilt as Virginia Marine Resources Commission, the U.S. Coast Guard, firefighters and police worked to secure the barge.

The pier is 706 feet long with shelters, cleaning stations and floodlights. In 2015, the Buckroe Fishing Pier was renamed the James T. Wilson Fishing Pier in honor of the city's retiring Parks and Recreation director.

There is no estimated timetable for restoration yet, but it is likely to be a lengthy process. The first step is for engineers to determine the extent of the damage. 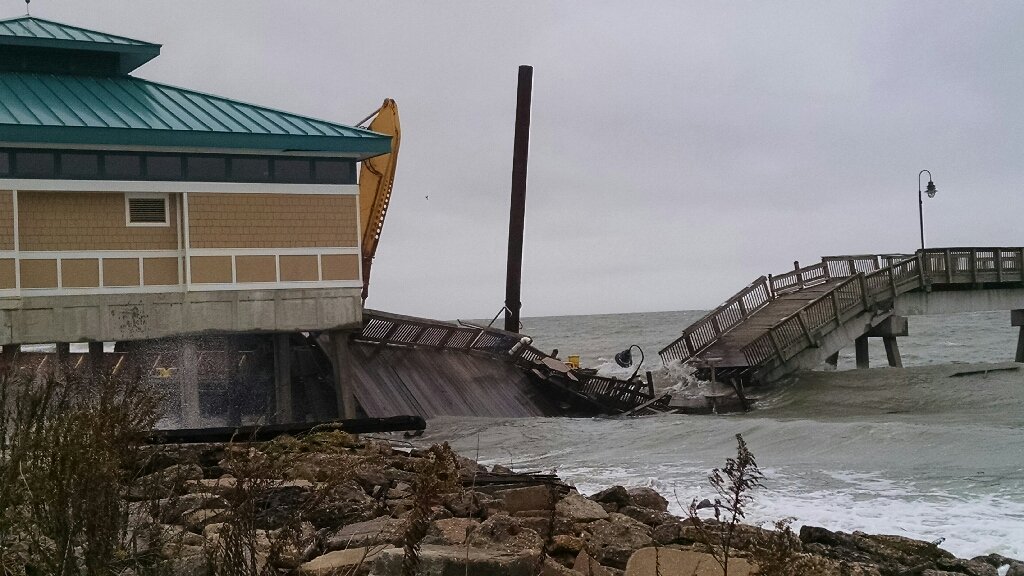 As for first steps, the Hampton Fire Department Chief said, "What we're trying to do is get a backhoe hooked up to it; we'll pull it to the sand. Hopefully we can get some mount rigors, some anchors - get it secured in place so it doesn't make any more damage."

Monday's efforts to pull the barge away from the pier was slowed by the rising tide. Crews from Hampton Public Works, the police and fire departments, the Virginia Marine Resources Commission and the Coast Guard worked on it for much of the day.

Dozens of onlookers braved the cold to watch crews use cable, lines and tug boats to free up the 80-foot barge owned by Coastal Design.

"It's a crucial process because we have to deal with the tides and can't have the boats run aground," said Commander Dean Martin with the U.S. Coast Guard.

Finally, after several attempts they finally were able to re-float the foot barge around 3 p.m.

"I just hope there was no structural damage to the pier," said one resident watching.

No one was hurt in the incident.

This isn't the pier's first damaging experience - it was destroyed in 2003 during Hurricane Isabel.  The City of Hampton says the pier sees 36,000 visitors each year, bringing in more than $330,000 in revenue.

One Hampton resident said, "Even though it's not the original pier, it's like a landmark because you grow up here - you were raised on that pier."

Engineers will now inspect the pier for structural damage. The City of Hampton says they are still working out details as to who will pay for the damage cost and the barge removal process.