VIRGINIA BEACH, Va. - It's hard to imagine a dog sitting patiently on the edge of Lynnhaven Parkway which is an incredibly busy Virginia Beach intersection.

"She is very street smart and very car savvy; she knows not to go out into the road," said Meghan Conti, an investigator with Virginia Beach Animal Control.

The brown and white hound seems very approachable. "She's not, though. We have tried baiting her with treats, calling him [her], leashing him [her], using kindness - nothing is effective," said Conti.

She's known as "Lucy," the elusive hound. Virginia Beach Animal Control has been working to catch her for more than six months.

"She was previously adopted, but the owners had her for only a few days. There was no bond formed, and she escaped," said Conti.

After failed attempts with treats and food, Conti and her team moved to putting out a human trap baited with food.

"We found evidence the dog entered the human trap one time and apparently she escaped or someone let her out, and so that is counterproductive. Then the dog is leery of the trap and won't go back in," explained Conti.

Another challenge is the public and those passing by in their cars. People are throwing food out of their windows, which disrupts the cycle.

"We really need the public to back off a bit and allow us to do our job," said Conti.

Animal Control has motion detection cameras that have been set up. Their team is working in tandem with Gina Highfield, who runs the Facebook page Lost and Found Pets of Hampton Roads.

"Just knowing she is out there every night... my dogs are inside being spoiled on a couch she is out in the woods in freezing cold," said Highfield.

Highfield helped with a new approach. A "Missy Trap" was set up in the woods and it's basically the size of a large dog kennel.

"The Missy Trap is better for dogs that are more skittish and they won't go in a confined space to eat," explained Highfield.

Large signs have recently appeared at the intersection, asking the public not to feed the dog and to stay off the private property in which Lucy takes shelter.

"This is our job. We are trained in how to do this; we have done this for years. We need the public to trust we are doing everything possible and to allow us the time and patience we need," said Conti.

Related: Hampton pet owner reunited with cat more than a year after it disappeared

Animal Control says once the hound is caught, she will be evaluated by a vet with the hopes of adopting her into a forever home.

"We have winter coming and this is becoming more urgent," said Conti. 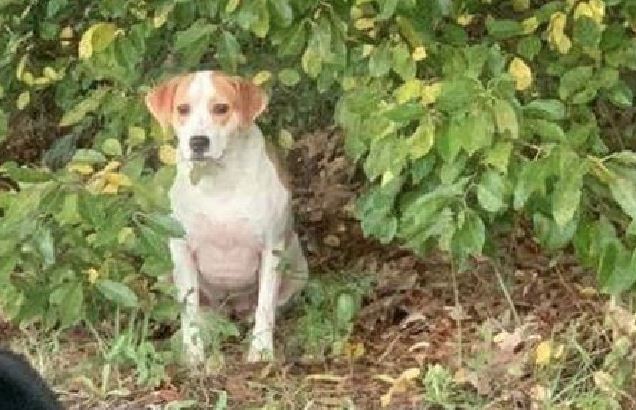