The ongoing impeachment inquiry into President Donald Trump took center stage of the Democratic presidential primary debate on Wednesday in Georgia following a blockbuster day of testimony on Capitol Hill.

Two of the candidates who may end up having a say in Trump’s eventual fate, Sens. Elizabeth Warren and Amy Klobuchar, were among the first to weigh in on the proceedings in Washington.

Using the impeachment hearings to advance her argument that government has been corrupted by money, Warren opened the debate questioning how wealthy Republican donor Gordon Sondland — the star witness in Wednesday’s hearing — won his ambassadorship to the European Union.

Warren said Sondland’s testimony shows “the corruption, how money buys its way into Washington.” Donors should not believe they are entitled to ambassadorships, she argued.

“I’m taking a pledge,” she said, asking others on stage to join her. “Anyone who wants to give me a big donation, don’t ask to be an ambassador, because I’m not going to have that happen. … We are not going to give ambassador posts to the highest bidder.”

There were concerns that Wednesday night’s debate would be overshadowed by the momentous day in the public impeachment hearings on Capitol Hill, a topic the candidates will no doubt be asked to address.

Sondland testified that there was indeed a quid pro quo for Ukraine to announce investigations into the 2016 election and that came from Rudy Giuliani, the President’s personal lawyer, at the “express direction of the President.” 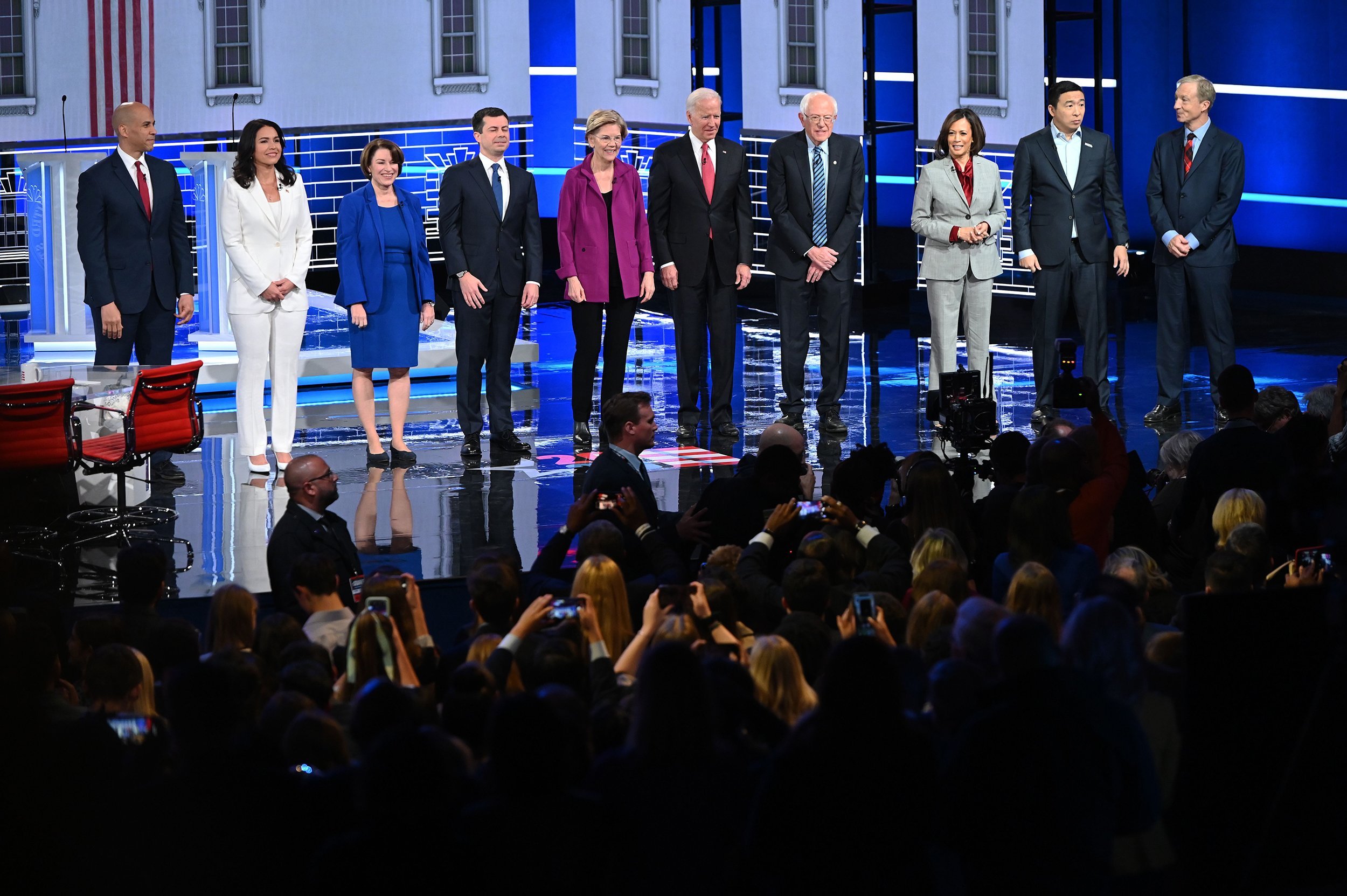 Trump, Sondland testified, also “wanted a public statement from President (Volodymyr) Zelensky committing to investigations of Burisma and the 2016 election,” which he later took to understand as an investigation of former Vice President Joe Biden and his son, Hunter. Giuliani, in turn, “expressed those requests directly to the Ukrainians” and to Sondland, among others: “We all understood that these pre-requisites for the White House call and White House meeting reflected President Trump’s desires and requirements.”

Biden’s son, Hunter Biden, served on the board of Burisma. There is no evidence of any wrongdoing by either Biden.

California Sen. Kamala Harris said the day’s testimony pointed to corruption within the administration. She said Sondland’s testimony underscored that there are two systems that exist in America: one for “the powerful people who with their arrogance think they can get away with this” and the rest of Americans who can’t.

The disjointed beginning to the debate bounced from subject to subject, and was marked by two candidates — businessmen Tom Steyer and Andrew Yang — going nearly 30 minutes without being asked a question.

One of the fiercest exchange early in the debate unfolded between Hawaii Rep. Tulsi Gabbard and Harris, who tangled in an earlier debate. Harris was asked to respond to a lengthy diatribe by Gabbard criticizing the Democratic establishment and Hillary Clinton, particularly her foreign policy.

Harris responded by arguing that Gabbard was a divisive force who spent several years on Fox News attacking the Democratic Party.

“I think it’s unfortunate that we have someone on this stage that is attempting to be the Democratic nominee for the president of the United States who during the Obama administration has spent four years full-time on Fox News criticizing President Obama,” Harris said.

Gabbard shot back that Harris was “continuing to traffic in lies and smears and innuendos because she cannot challenge the substance of the argument that I’m making.”

Now within three months to the opening contest in Iowa, South Bend, Indiana, Mayor Pete Buttigieg has surged in the kickoff state of Iowa, increasing the scrutiny on his record and his level of experience as a 37-year-old candidate. With his growing war chest and his rise in the polls, Buttigieg came into the contest as the most likely target of the other nine candidates.

Given the setting in the southern state of Georgia — where Democratic voters will go to the polls on March 24 — some of the candidates may seek to highlight one of the biggest weaknesses of Buttigieg’s candidacy: his lack of support among black voters, who are the core of the Democratic base.

In the 2016 Democratic primaries, CNN exit polls showed that the black vote factored heavily in the outcome in many of the early states in the south. Black voters made up 61% of the electorate in South Carolina; 54% in Alabama; 51% in Georgia; 32% in Tennessee and 32% in North Carolina.

Buttigieg’s weakness in that area — he has made little headway in early states like South Carolina, for example — was amplified by the recent controversy over the use of stock photo of a woman from Kenya on his campaign website to promote his Douglass plan, a proposal that he says would dismantle “racist structures and systems” to invest in black Americans.

In a series of tweets, the Buttigieg campaign’s rapid response director Sean Savett said the stock photo was selected while a contractor was running the campaign’s site. “As our campaign has grown, we have brought all of our web development in-house to help guard against mistakes like this. We apologize for its use and for the confusion it caused,” Savett said.

The candidates’ matchup in the South also brings the race to an area that has so far been Biden’s stronghold. No other candidate has been able to match his support among black voters, particularly black women who are the most influential constituency in the Democratic race. Biden will once again be looking to highlight his ties to former President Barack Obama, and Obama’s decision to pick him as his vice president.