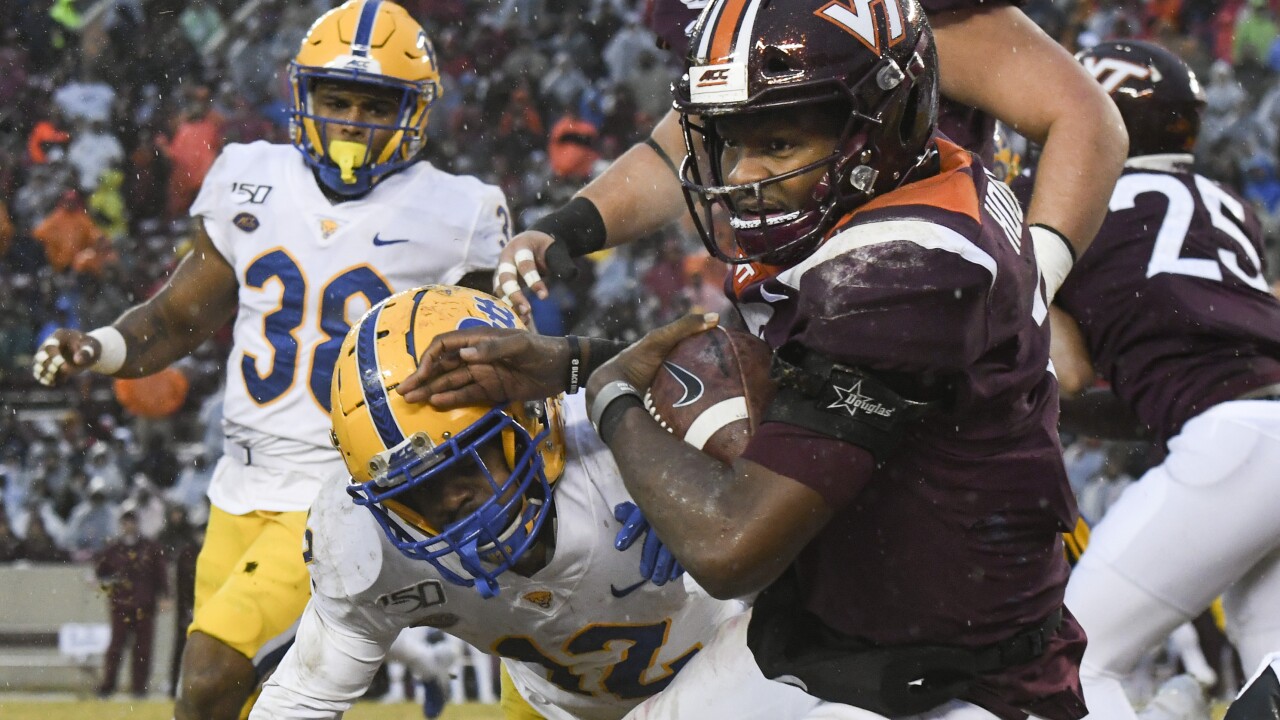 BLACKSBURG, VA – NOVEMBER 23: Quarterback Hendon Hooker #2 of the Virginia Tech Hokies is hit by defensive back Paris Ford #12 of the Pittsburgh Panthers in the first half at Lane Stadium on November 23, 2019 in Blacksburg, Virginia. (Photo by Michael Shroyer/Getty Images)

Hooker threw touchdown passes to Tré Turner and Damon Hazelton, and Virginia Tech’s defense scored on a fumble return, as the Hokies won for the sixth time in their past seven games and moved to 8-3 overall, 5-2 in the ACC. Pittsburgh fell to 7-4, 4-3 in the ACC.

The Virginia Tech win sets up an in-state showdown Saturday with rival Virginia, with the victor claiming the ACC’s Coastal Division and the right to play in the ACC Championship Game on Dec. 7.

The Hokies came up with the big play early in the game when Hooker found Tayvion Robinson for a 71-yard gain to the Pittsburgh 1. On the next play, tight end James Mitchell carried it in, and the extra point gave the Hokies a 7-0 lead with 3:16 left in the first quarter.

The Hokies all but put the game away right before halftime. Virginia Tech went 90 yards in 12 plays, drawing Pittsburgh offsides on a fourth-and-2 from the Pittsburgh 40 and scoring three plays later on a 3-yard touchdown pass from Hooker to Turner that gave them a 21-0 lead.

Tech closed the scoring with a 2-yard touchdown pass from Hooker to Hazelton in the fourth quarter.

• The Hokies have held their past three opponents to 301 total yards or less. None of those opponents rushed for more than 63 yards.

• Hazelton’s touchdown reception was his seventh of the season and the 19th of his career (15 at Tech, four at Ball State).

• Turner’s touchdown reception marked his third of the season and the seventh of his career.

• The 71-yard pass to Robinson is the longest of Hooker’s career. He completed a 67-yarder in the Hokies’ win at Miami.

• Mitchell’s touchdown marked his fourth rushing touchdown of the season and his sixth overall.

UP NEXT
The Hokies now gear up for the Commonwealth Clash against rival Virginia in Charlottesville, Virginia. The game kicks off at noon. Tech has won the past 15 meetings in the series.