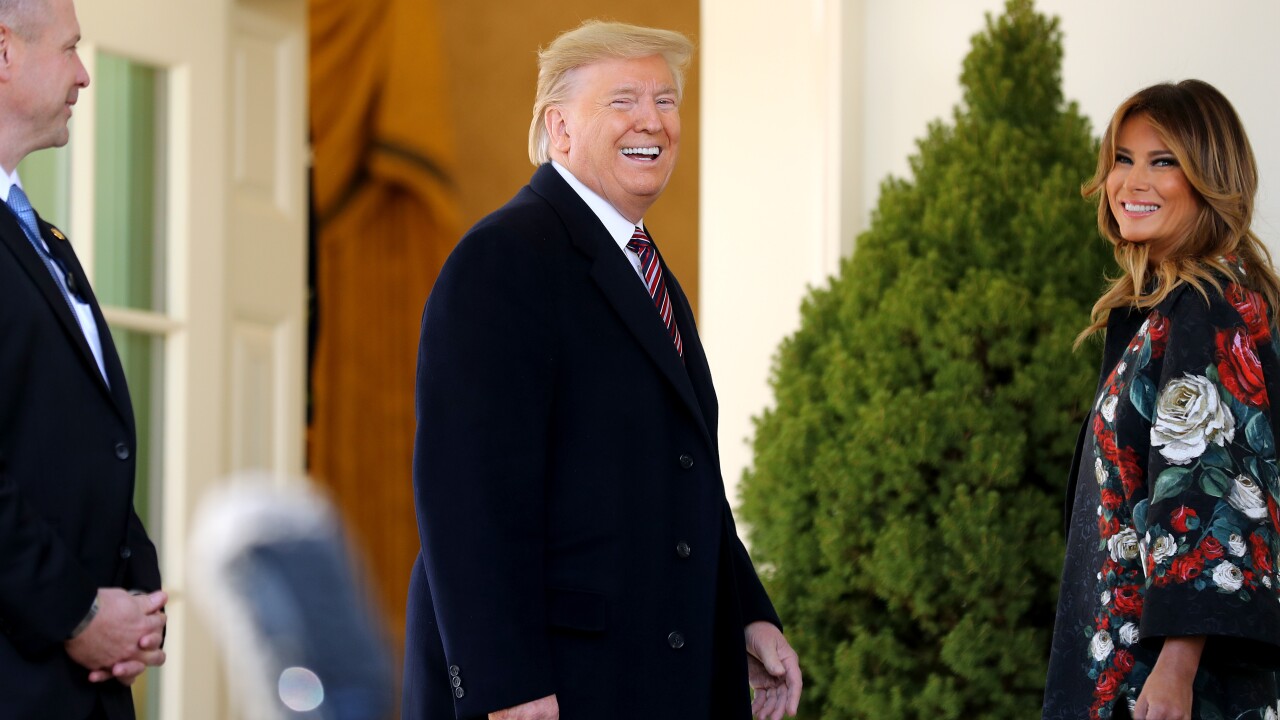 WASHINGTON, DC – NOVEMBER 25: U.S. President Donald Trump and first lady Melania Trump return to the Oval Office after posing for photographs with Conan, the U.S. military K9 that assisted in the raid that killed ISIS leader Abu Bakr al-Baghdadi, on the Rose Garden colonnade at the White House November 25, 2019 in Washington, DC. Trump talked about how the dog was a hero and said he presented the animal with a medal and a plaque. (Photo by Chip Somodevilla/Getty Images)

President Donald Trump and first lady Melania Trump will participate in the annual turkey pardon in the White House Rose Garden Monday. Justice will be served, along with stuffing and cranberry sauce, as Trump makes his decision: Bread, or Butter?

The National Thanksgiving Turkeys, weighing in at 45 and 47 pounds, respectively, were plucked from a flock raised by Butterball turkey farmer Wellie Jackson. The turkeys rode the gravy train to the White House from Clinton, North Carolina, over the weekend.

Bread and Butter overnighted at the luxe Willard Intercontinental Hotel upon their arrival in the nation’s capital and held a news conference Monday ahead of their trip to the White House.

Counselor to the President Kellyanne Conway told reporters in the briefing room earlier Monday that she expects the President to pardon both turkeys, as is custom. Bread and Butter will avoid the fate of more than 46 million of their turkey brethren expected to be consumed across the country this Thanksgiving, according to the National Turkey Federation.

Following the ceremony, Bread and Butter will retire to Gobbler’s Rest at Virginia Tech in Blacksburg, Virginia.

Rumors of turkey pardons go back in presidential history as far as the Lincoln administration. Folklore has it that Lincoln’s young son asked his father to spare a pet turkey that was supposed to be part of their Thanksgiving dinner.

The National Turkey Federation became the official turkey supplier to the first family in 1947 and the formal turkey presentation ceremony has been around since President Harry Truman. Truman was the first to accept a turkey from them — however, he did not spare the bird.

The first documented turkey pardon was given by President John F. Kennedy in 1963, though it didn’t catch on right away. Even though President Gerald Ford pardoned President Richard Nixon, neither one of them decided to officially pardon any turkeys.