The opening impeachment hearing held by the panel expected to draft articles of impeachment against the President was contentious from the moment Judiciary Chairman Jerry Nadler gaveled the hearing into session. Republicans repeatedly forced procedural votes and quizzed Nadler on committee rules as they dismissed the impeachment proceeding as a sham, asking her members: “Are you ready?”

The hearing marked an important step forward for Democrats in the impeachment proceedings, which have shifted from the House Intelligence Committee-led investigation to the Judiciary panel. Democrats are on track for an impeachment vote on the House floor by the end of the year, and House Speaker Nancy Pelosi held a closed-door, members-only meeting Wednesday morning where Democrats agreed to continue moving forward with the inquiry.

At the hearing, Democrats pushed past the Republican objections to elicit testimony from the three of the four legal experts they invited to explain why Trump’s actions constituted impeachment offenses.

Those three professors, Harvard University’s Noah Feldman, Stanford University’s Pamela Karlan and North Carolina’s Michael Gerhardt, were all asked, based on the House Intelligence Committee evidence, “Did President Trump commit the impeachable high crime and misdemeanor of abuse of power?” All said that he did.

“If what we’re talking about is not impeachable, then nothing is impeachable,” Gerhardt said. “This is precisely the misconduct that the framers created a Constitution, including impeachment, to protect against.”

While the three Democratic-invited law professors backed impeachment, the law professor called by Republicans to testify, George Washington’s Jonathan Turley, argued that Democrats were making a mistake that would have long-lasting consequences.

“I am concerned about lowering impeachment standards to fit a paucity of evidence and an abundance of anger. I believe this impeachment not only fails to satisfy the standard of past impeachments but would create a dangerous precedent for future impeachments,” Turley said.

“Never before, in the history of the republic, have we been forced to consider the conduct of a president who appears to have solicited personal, political favors from a foreign government,” said Nadler, a New York Democrat. “When we apply the Constitution to those facts, if it is true that President Trump has committed an impeachable offense — or impeachable offenses — then we must move swiftly to do our duty and charge him accordingly.”

Republicans slammed the Democratic impeachment inquiry, which Rep. Doug Collins of Georgia, the top Republican on the committee, dismissed as a “railroad job.”

“This is not an impeachment. This is simply a railroad job,” Collins said. “And today is a waste of time.”

Republicans launched their protests of the hearing seconds after it began, which included forcing procedural votes on motions for House Intelligence Chairman Adam Schiff to testify, to have the whistleblower testify and to postpone Wednesday’s hearing.

But the law professors made clear they weren’t going to just be props for a partisan fistfight.

Karlan pushed back against Collins, who said in his opening statement the professors “couldn’t have possibly actually digested the Adam Schiff report from yesterday or the Republican response in any real way.”

“Mr. Collins, I would like to say to you, sir, that I read transcripts of every one of the witnesses who appeared in the live hearing because I would not speak about these things without reviewing the facts, so I’m insulted by the suggestion that as a law professor I don’t care about those facts,” she said.

The President’s attorneys were invited to participate in the hearing, but they declined, arguing that the process was unfair and they were given no details about the hearing itself.

Nadler has given the President’s lawyers until Friday to say whether they will participate in future impeachment proceedings in the committee, which is expected to include a presentation from the Intelligence Committee on its findings.

While Democrats are making the allegations from the Ukraine investigation and obstruction of Congress a focal point of their questioning, they also raised obstruction of justice allegations that were outlined Trump in former special counsel Robert Mueller’s report. Democrats haven’t yet said whether the Mueller allegations will be included in potential articles of impeachment, as some congressional Democrats have pushed for, but they asked about them at Wednesday’s hearing.

As they questioned the academics, Democrats displayed a slide on a hearing room screen titled, “Impeachable offenses,” which listed three items: “Abuse of power and bribery, obstruction of Congress, and obstruction of justice” — a possible hint about Democrats’ intentions for articles of impeachment.

Republicans focused their questioning on Turley, giving him the opportunity to detail his problems with the Democratic impeachment inquiry. Turley argued that Democrats have failed to provide evidence that meets “any reasonable interpretations” of the crimes they allege Trump has committed.

“If you are going to accuse a president of bribery, you need to make it stick, because you are trying to remove a duly elected president of the United States,” Turley said. “The statement has been made not just by these witnesses but Chairman Schiff and others, that this is a clear case of bribery. It’s not.”

Turley also criticized the Democrats’ charge of obstruction of justice, saying that Democrats have failed to let the courts rule on their subpoenas, unlike in the impeachment proceedings of Richard Nixon, by rushing the process.

“Fast and narrow is not a good recipe for impeachment,” Turley said. “You set an incredibly short period, demand a huge amount of information, and when the president goes to court, you then impeach him.” 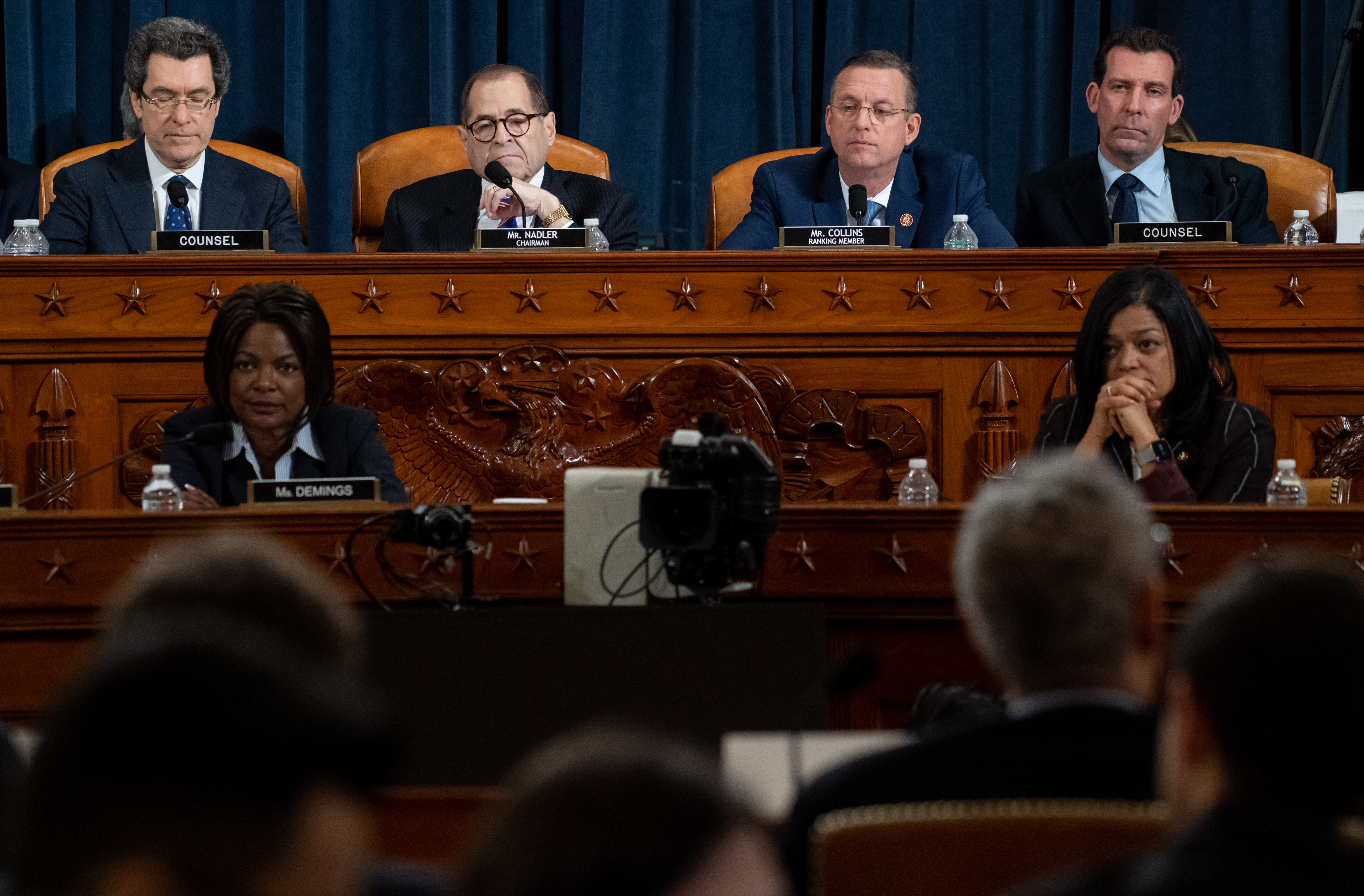