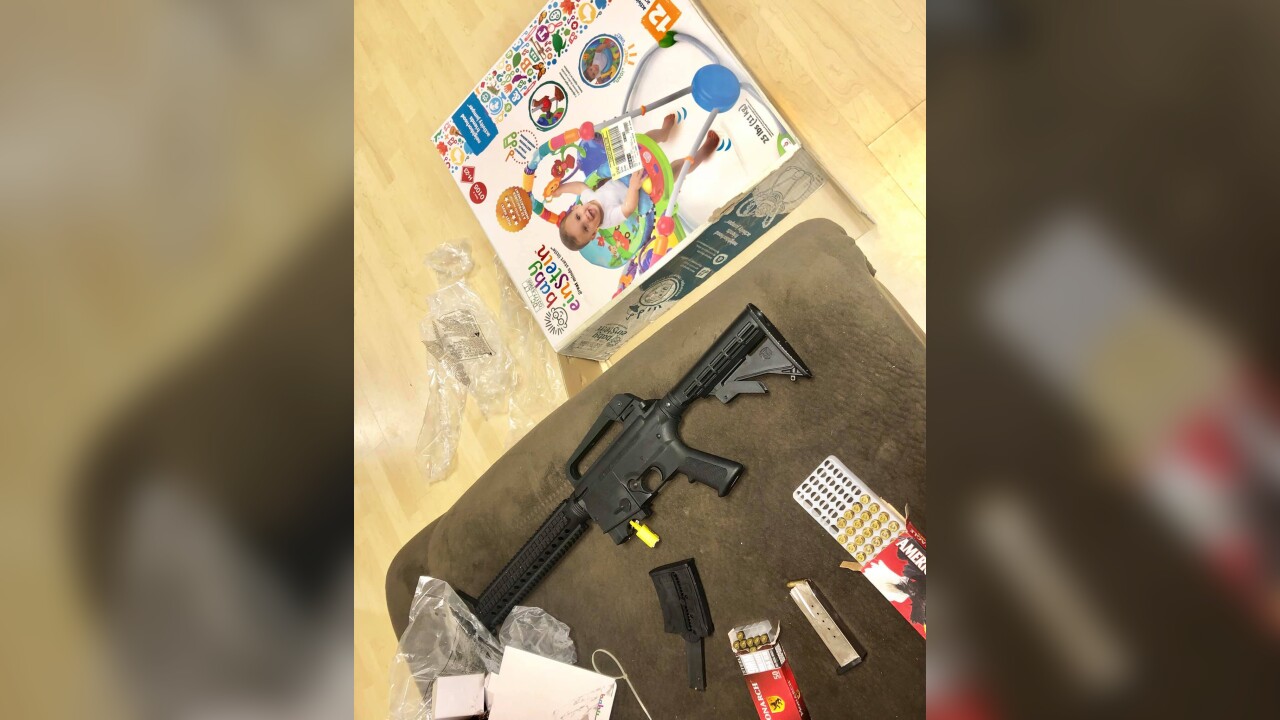 A woman in Florida wanted to get her friends a baby shower gift to welcome a new addition to their family. She found a great deal at Goodwill on what she thought was a baby bouncer — but she said the sealed box ended up containing a loaded rifle instead.

Veronica Alvarez-Rodriguez went to a Goodwill in Valparaiso, Florida, on Sunday and found two gifts: a baby bathtub toy and a Baby Einsten bouncer that she said appeared to be brand-new.

“I was winning. I thought I hit the jackpot with two gifts that were not open,” she told CNN.

Later that day at the baby shower, mother-to-be Amber Rosas and her husband received the gift and loved it.

Rosas and her husband were eager to take the bouncer out of the box but were shocked when they found a Mossberg 715T semi-automatic rifle was inside, according to Alvarez-Rodriguez.

This is what a Florida couple says they found inside when they opened the baby bouncer box.

“All of our husbands are military, there were five soldiers around, so they knew what kind of gun it was right away,” she said.

Alvarez-Rodriguez said she didn’t think to open the box in the store because the way it was taped up indicated it had never been opened.

“All the questions from people at the party started coming in, and everyone was just laughing,” she said.

After realizing what they had on their hands, they called police and explained what happened.

Police were able to confirm it was a .22 caliber rifle, although Crestview Police spokesman Andrew Schneider told CNN he can’t confirm whether it was loaded.

Originally, after police inspected the gun and checked Rosas and her husband’s IDs for any felonies, the couple was told they could keep the gun, Schneider said.

But Monday, Schneider said officers picked it up to try to figure out who the original owner was. With the serial number on the rifle, the Bureau of Alcohol, Tobacco, Firearms and Explosives can trace the firearm to determine where it was manufactured, where it was sold or purchased and who may have registered it.

Goodwill told CNN this wouldn’t be the first time a questionable donation has surfaced.

“You can imagine we get all kinds of crazy things — some are donated intentionally and some accidentally, so it’s not uncommon for weird things to come through,” said Tamara Williams, Goodwill’s vice president of human resources. “We’ve had someone’s ashes donated.”

Williams said although Goodwill can’t be certain the rifle was in the box when it was sold from their Valparaiso store, she doesn’t have reason to believe otherwise.

Williams said she spoke with the person who took in the item and they told her they didn’t have any indication there was anything other than a baby bouncer inside the box. She told Williams it didn’t rattle and didn’t seem any heavier than it should have been.

If a Goodwill donation seems accidental or personal before it hits shelves, Williams said company policy is to set it aside for 30 days to see whether anyone comes to claim it.

Alvarez-Rodriguez said she reached out to Baby Einstein on Twitter to see if it was aware of what happened. The company told her it doesn’t sell its products directly to Goodwill and doesn’t have control over what happens with used products.

Baby Einstein did however, promise to send Rosas a new jumper, Alvarez-Rodriguez said.

If no owner is found for the rifle, Schneider said Rosas and her husband may keep the weapon if they follow state laws to register it.