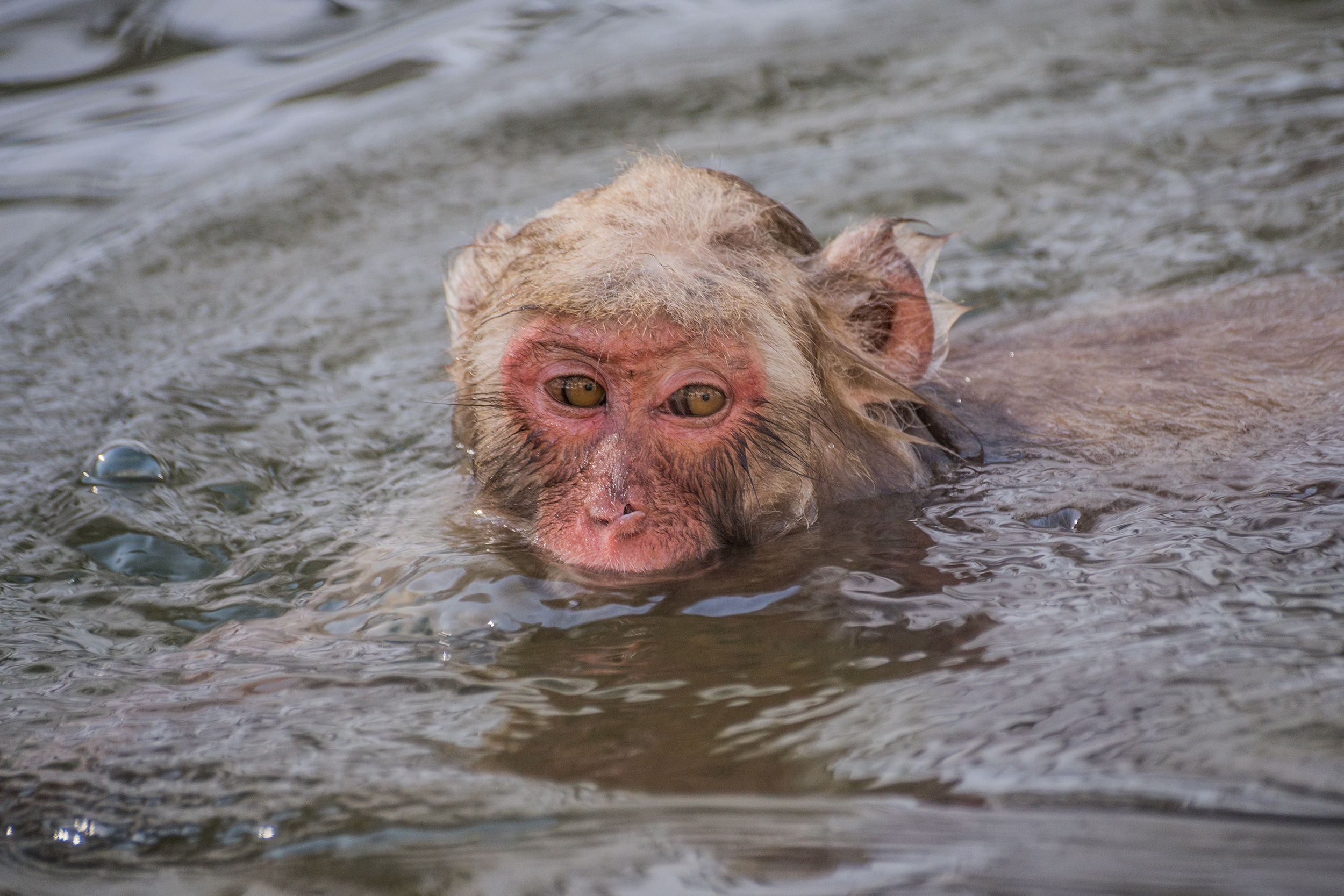 The Japanese macaques in Jigokudani Monkey Park begin most days with a relaxing dip in their own private hot tub.

But life hasn’t always been so simple for the snow monkeys of Jigokudani (“The Valley of Hell,” named for its natural hot springs). They were initially forced from their habitat in the 1950s by the development of nearby ski resorts.

As a result, they moved into nearby towns and quickly found trouble, raiding fruit from local farmers’ orchards. The farmers petitioned the government and were granted the right to hunt the animals.

A Nagano Railway Company worker and local nature enthusiast, Sogo Hara was determined to protect the monkeys and worked for months to persuade troops to leave the creatures alone. Hara’s strategy was to lure the macaques into the mountains with apples.

His group soon discovered a nearby ryokan (a traditional Japanese inn). As is typical for ryokans, Korakukan’s property included outdoor onsen for guests’ enjoyment. One day in 1963, so the story goes, an errant apple fell into the human’s onsen. A young monkey tested the steamy water and emerged with the apple. He didn’t exit the waters immediately, though, and many of the monkeys looked on as their buddy quietly enjoyed the water.

It wasn’t long before other young monkeys began mimicking the water-loving monkey’s behavior.

Within months, all of the female monkeys had taken to bathing in the hot springs. While this behavior delighted human visitors, it created a clear hygiene issue for the inn.

This led to the establishment of the Jigokudani Monkey Park in 1964, thanks to the efforts of Hara. Today, this is where the snow monkeys live, freely soaking in their dedicated hot springs peacefully.

Damage resulting from Typhoon No. 19 had impacted the spring’s water levels and temperature but restoration work is now underway and the park is open to tourists.

The Jigokudani Facebook page offers daily updates on the restoration work and presence of the monkeys.

The snow monkeys’ onsen practice isn’t solely about warming their bodies or bobbing for apples — like the Japanese and visitors to Japan, they seem to appreciate onsen for its stress-reducing properties.

Since the macaque’s thick coats keep them warm, and they take a dip even when there are no apples in sight, researchers’ studying the monkeys at Jigokudani believe hot springs function primarily to ease their tension.

Staff encourage the macaques to keep the park’s onsen in their daily routine, offering a steady diet of soybeans, barley and, of course, apples.

Researchers also discovered the monkeys’ indifference to the nearly 500 daily visitors to the park. In other words, their stress hormones did not increase as the number of park visitors increased.

Even during the busy tourist season, the monkeys meander nonchalantly about the park, climbing in and out of the hot spring as humans snap photos and ooh and ahh in delight.

Unlike some of Japan’s other open animal experiences, such as Nara Deer Park, touching or feeding the monkeys is strictly prohibited. But this rule doesn’t detract from the joy of sitting poolside as the macaque play leapfrog.

Since the monkeys don’t swim every day (in spite of their warm fur coats, they seem to prefer the hot springs on colder days), visitors will want to plan accordingly before heading north to the park.

A flexible itinerary is best, and January and February are prime visiting months. Fresh snow is ideal — the monkeys are at home and perhaps at their playful best in the snowy climate. If you’re lucky, you might even catch baby monkeys wrestling and making snowballs.

Time of day is a critical piece of planning, too: Jigokudani Monkey Park requires an overnight stay to catch the monkey’s early morning soak. While it is possible to do it as a day trip from Tokyo, even catching the earliest train will make for a later arrival, when crowds are at their greatest, and that’s if everything goes off without a hitch. If you miss seeing the monkeys, you’ll wish you had allowed for more time.

You’re better off arriving the night before you plan to visit. Stay at a ryokan, delight in its onsen and take off for the park first thing in the morning. If you can, leave time for onsen exploration beyond your ryokan, for at the base of the mountain leading to the park is a main street packed with nine unique onsens for weary travelers.

Each meant to aid a particular ailment, the onsen encourage visitors to walk the charming street in a yukata (light kimono) and wooden sandals to collect stamps on a towel passport from all the onsens. Doing so is believed to ward off evil spirits and bring divine favor. The thin strip contains no shortage of mom-and-pop restaurants eager to share their house-made versions of Japanese staples.

Most of these inns offer complimentary morning shuttles to the Jigokudani Monkey Park’s information center. To best even these crowds, early risers can trek up the scenic path themselves for a chance at some private time with the monkeys.

From the information center, the monkey’s onsen is only accessible via a one-mile path through the forest, about 30 minutes each way. Unfortunately, Jigokudani Monkey Park is not accessible to wheelchairs as the final ascent consists of tight winding paths and steep steps.

Jigokudani Monkey Park’s pool-side views offers visitors a delightful insight into this unique behavior. Relaxing with the chilled-out macaques is a quintessential excursion from Japan’s mega-cities.

Getting to Jigokudani Monkey Park from Tokyo requires an hour and a half ride on the shinkansen (high speed train) to Nagano, then a 50-minute trip on a local train to Yudanaka station in Yamanouchi, the town the park is located in. The Jigokudani Monkey Park information center is two miles from the train station.

For winter enthusiasts exploring nearby Shiga Kogen, the largest ski field in Asia, it’s less than a hour’s bus ride away.